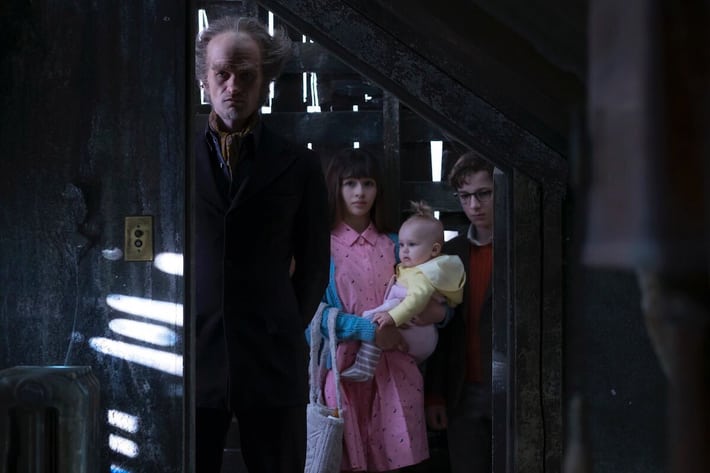 A Series of Unfortunate Events: The Bad Beginning

Other than Harry Potter, if there was a book series that dominated my childhood, it would have to be A Series of Unfortunate Events. The stories follow the Baudelaire orphans as they are pursued by the evil Count Olaf who wants to seize the orphans’ fortune. Despite the dark premise, the books were clever and hilarious, and I’m glad to say the new Netflix series does them justice.

The first two episodes are “The Bad Beginning” parts 1 and 2, in which the Baudelaire orphans find out their parents are dead, and are sent to live with the dastardly Count Olaf, who wants to steal their fortune, then kill them. Olaf, a self-professed actor who struts about the screen, is played with relish by Neil Patrick Harris. It’s a role that taps into Harris’s Broadway roots, allowing him to sing (both the theme song, and within the show), make dramatic entrances, and generally be an overdramatic diva. It’s great.

It works especially well because everyone else on the show is playing it pretty straight; if they all had Harris’s zaniness, it would be a little much. The Baudelaires (Violet, Klaus, and Sunny) are much more muted, but it’s effective. Malina Weissman is calmly confident as Violet, the eldest Baudelaire, and a genius inventor. Louis Hynes is delightfully snarky as Klaus the bookworm. And Presley Smith is adorable as Sunny, the youngest Baudelaire, a baby with sharp teeth and a love of biting. (It was a little surprising that there’s only one baby playing Sunny; aren’t babies usually played by twins in TV?)

The other major character is the narrator, Lemony Snicket, played by Patrick Warburton. It is his solemn duty to investigate and explain what happened to the Baudelaires, though it pains him to do so. It pains him so much that he constantly encourages viewers to turn off their TV and spare themselves the impending tragedies. Warburton is as serious as Harris is kooky, but no less funny.

The show mixes together many types of humor. The most obvious are Olaf’s absurdity and Snicket’s deadpan. There are some really dumb jokes too, such as:

Olaf: Welcome to my humble home, orphans. And…a man with a hat on.

Olaf: Actually, I’m about to be rather wealthy, so…

(I say dumb, but I laughed at that one really hard). There are a few running gags, one of which has Snicket and the other characters stop and define words, some of which are very commonplace. It’s a trademark of the book, and extremely funny. And then there’s my favorite running gag of Olaf’s henchmen being politically correct. Sure, they’ll threaten children, but they’re pretty PC for villains. (“Get into your pajamas and say your prayers. Unless you’re atheists.”)

The henchmen are great additions to the cast, especially Usman Ally as the Hook-Handed Man, and Matty Cardarople as the Henchperson of Indeterminate Gender. The supporting cast is actually all pretty excellent. Jacquelyn (Sara Canning) and Gustav (Luke Camilleri) were good fun as a mysterious pair who are looking out for the Baudelaires. Their subplot wasn’t in the books, so it’ll be interesting to see where it goes.

The worldbuilding in the show is amazing. The story takes place in an indeterminate time period, in an indeterminate location. It almost seems to be in an alternative kind of reality, which works for the story. It also gives the creative team a lot of freedom, so the costumes and sets are charmingly anachronistic.

A Series of Unfortunate Events captures the quirky world of the book, and its humor. It also captures the books’ ability to drop in some beautiful and poignant lines. Two of my favorites (both spoken by Lemony Snicket) from the premiere:

“If you have ever lost somebody very important to you, then you already know how it feels. And if you haven’t, you cannot possibly imagine it.”

“Trouble and strife can cover this world like the dark of night, or like smoke from a suspicious fire. And when that happens, all good, true, and decent people know that it’s time to volunteer.”

Both those lines make you stop and think for a second. Of course, weightier lines like that are almost immediately followed by a joke, but that doesn’t detract from those moments. The ability to intersperse the slap-stick with some thoughtful moments is what made the books such a success, and is what makes the series so watchable. While there is some of the nostalgia factor happening here (there were a few moments that brought me straight back to my childhood), it doesn’t rely on its viewers having read the books. It’s a funny, unique show that – despite what the narrator says- is a delight to watch.