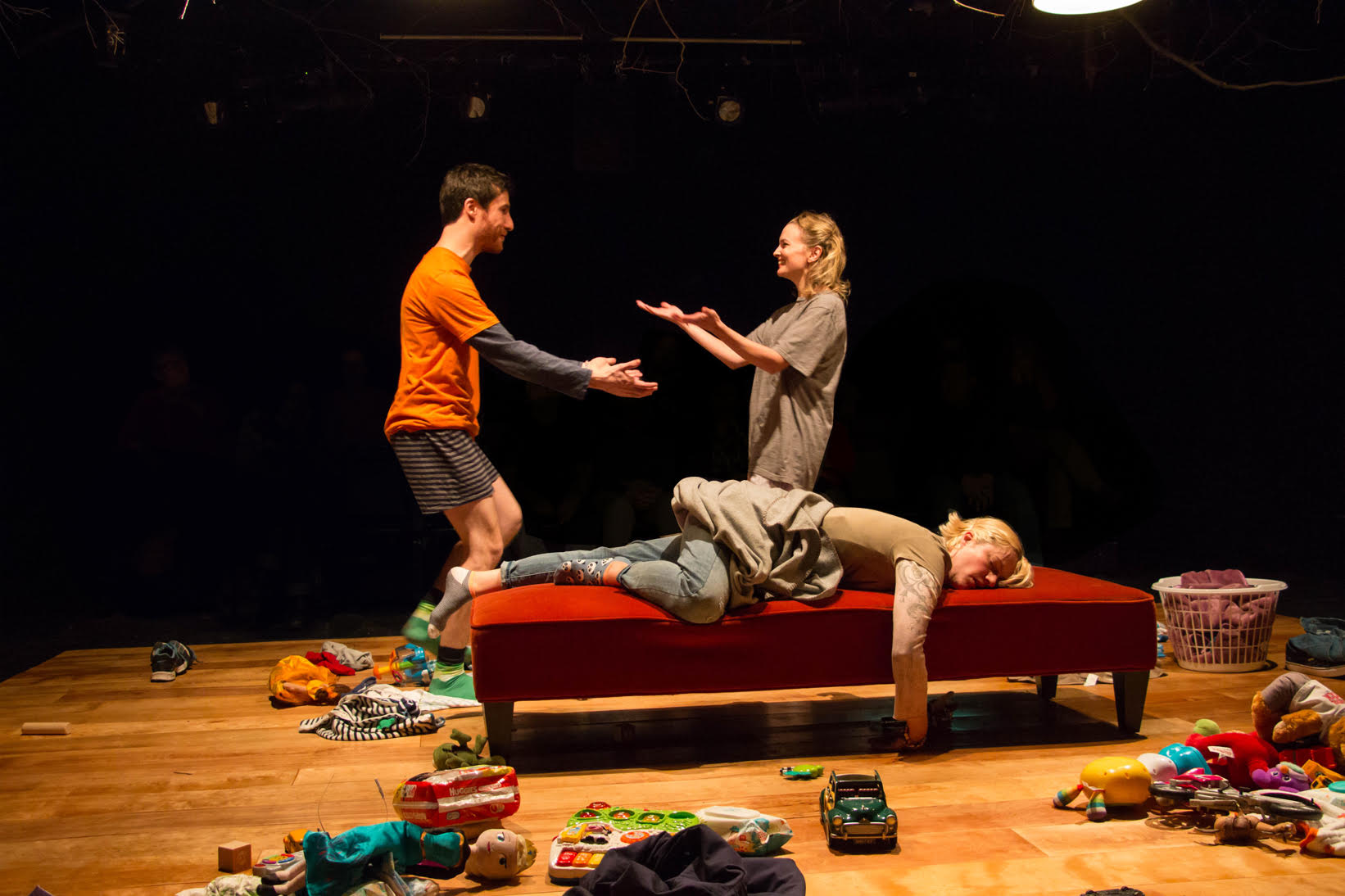 Lawrence Dial’s latest play, DANNYKRISDONNAVERONICA should come with a warning: If you are contemplating having children, spending 90 minutes watching four characters process their lives and roles as parents might send even the most baby loving people into a certain mental infertility. Don’t get me wrong; DANNYKRISDONNAVERONICA is a solid character study with a wry dark humor that provides a thoughtful narrative about the role of parents in modern day society.

Even the play’s most minute details draw the audience into the messiness of parenthood. The stage is strewn with cheap plastic toys, pointy objects, and balls with tentacle appendages. The actors tiptoe and jaunt over obstacles to avoid injury. Conversations instantly break and just as sporadically continue between the couples. And a tension lingers as though any loud noise could wake a baby, or any linguistic misstep could expose an unhealed wound.

It is within this context that we meet two stay at home parents, Danny (Ben Mehl) and Kris (Suzy Jane Hunt) and witness their friendship develop as they sit in a park in Brooklyn with each of their two children. Danny is affable but neurotic. He is a former musician who put his transient career aspirations aside to immerse himself in the act of raising his children. Ms. Hunt, fresh off a rich performance in Lawrence Dial’s The Room, plays Kris. She brings a complex and honest portrayal to her character that allows the audience to immediately sympathize with her but also understand that there is more to her than what lies on the surface.

Neither Kris nor Danny are bad parents. They take their kids out to the park. They are knowledgeable about the latest parenting pedagogy, and they genuinely love their kids. Yet Kris and Danny are both miserable. With apologies to Tolstoy, it appears that each unhappy parent is unhappy in his or her own way. What’s particularly unique about their own misery is their disproportionate suffering. Danny, for the most part, is adjusting to an acceptance that every moment of his life centers on raising his children leaving little room for little else. Kris, on the other hand, as we discover, has suffered a parade of horrible afflictions, both mental and physical. As they sit on a park bench and share their lives, we start to see that although they share a similar rhetoric of their daily struggles, Kris is talking about a metaphorical gunshot wound while Danny is complaining about perhaps a really bad paper cut. But they connect.

The fact that their underlying problems are so different allows much room for debate. To be honest, I’m not sure if this is a commentary on woman’s higher tolerance for pain, or that common ground can be found among all parents, at varying degrees of severity, or if it is a consequence that women in stories often must suffer far greater than men to reach the same threshold of sympathy. I don’t have an answer, but I tend to find it is a hallmark of a good play that when I am putting on my coat and leaving the theater, I’m contemplating these types of questions rather than nitpicking the set design or lamenting moments that took me out of the theater experience.

But what really elevates this play is not so much the evolving relationship between Kris and Danny that grows somewhat predictably, but the relationship that develops between their breadwinning spouses. Kris’s spouse, Veronica (Liz Wisan), has inherited a pizza shop and struggles financially since Kris no longer works. Danny’s career-focused wife Donna (Rachel Mewbron) is another highlight of the show. She is a reluctant nerd and workaholic who admits that she really loves the complex mathematical challenges of her job, even if her husband can’t comprehend it.

After an accident in the park, all the four characters are brought together. And it is the spouses’ conversation that brings out some of the richest dialogue. The play explores the ability of Danny and Kris, and Donna and Veronica to share their fears with each other in a way they cannot do with their own spouses. When their spouses are absent, there is a certain freedom – they no longer tiptoe over the potential mess in the room (both literally and figuratively). There is an honesty that this play explores which allows characters to bear their souls to near strangers in a way that is difficult to do with a close loved one.

Although the play initially struggles through some unnecessarily long scenes, DANNYKRISDONNAVERONICA finds its footing quickly as the characters’ stories unfold. Decisions by the director, Jeff Wise, complement the emotional intensity well, and one scene in particular, a tender beat boxing moment in a park in the middle of the night, creates a unique and memorable theater experience. It’s a scene emblematic of an immersive play worth seeing.

DANNYKRISDONNAVERONICA, presented by the Wheelhouse Theater Company, is now showing at the 4th Street Theater.