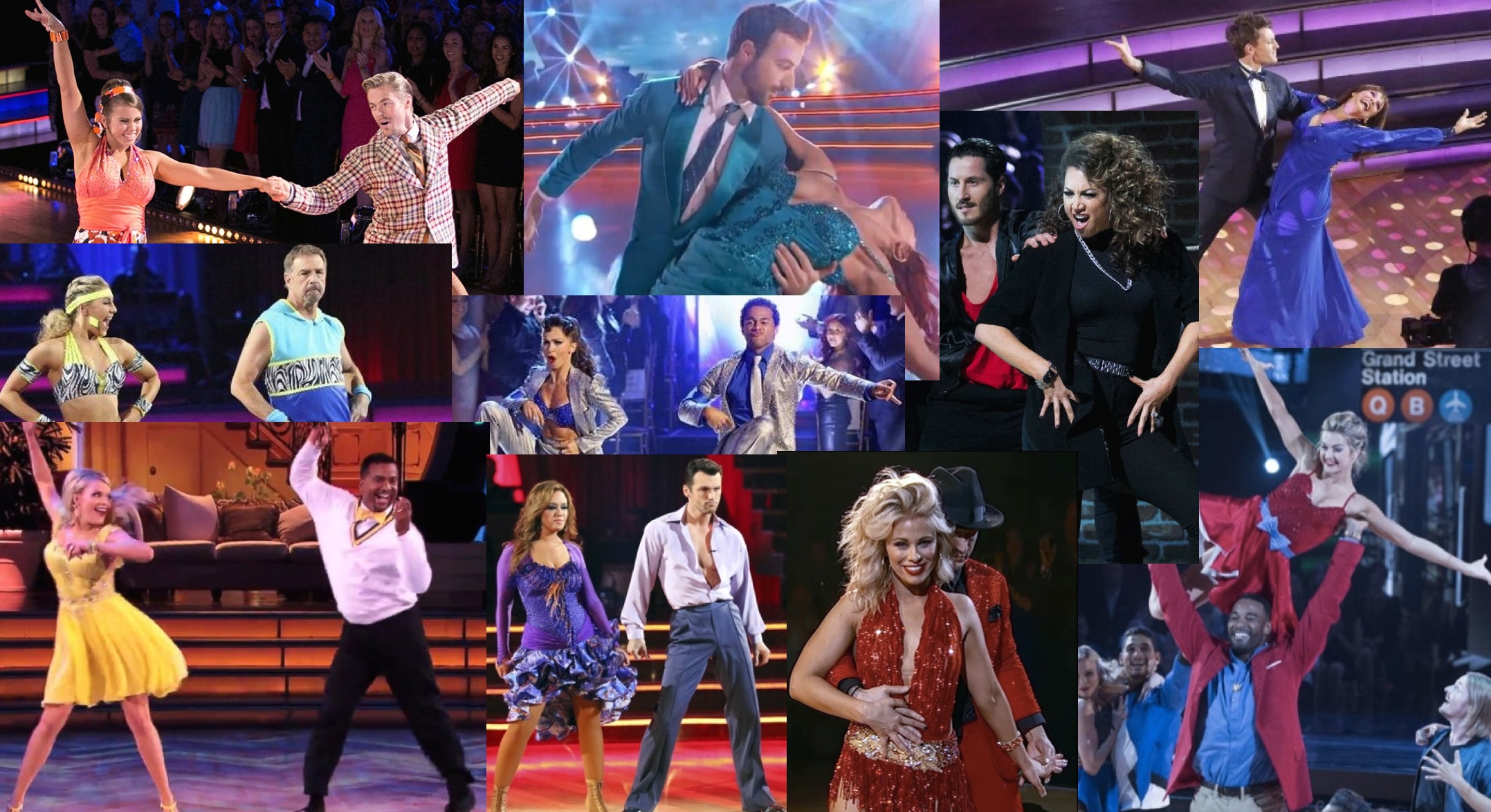 Dreamcasting: Dancing with the All-Stars

I’m finally fully caught up on the recent seasons of Dancing with the Stars, right up to that delirious Christmas spectacular wherein former Governor Rick Perry DJ’d for Vanilla Ice one day after meeting with the President Elect. The show is clearly nuts but damnit if the characters aren’t super compelling.

I want so badly for Sharna (the soulful Aussie pro with fiery red hair) to finally win her first mirrorball, but I didn’t want it in season 23 badly enough to root against Val (the sexy but big-hearted little brother to infamous pro Maks). I finally learned to love sprightly pro Sasha Farber after a character-defining season that saw him get engaged to Emma Slater (the most fun of the female pros) and do an incredible job teaching, partnering and choreographing for Terra Jolé (the show’s first little person contestant who finished in an astounding fifth place). I love watching the decades-long power saga of Ballas/Hough, especially with Julianne now sitting on the judges panel (where, by the way, she’s proven the perfect partner in crime for effervescent Bruno), and how the pressure of being the best makes 6-time winner Derek intermittently an unstoppable force (in the arms of an inspiring contestant like Kellie Pickler or Amber Riley) or a basketcase (Marilu Henner almost made his head explode). I can now feign interest in football because a Pittsburgh Steelers game gives me the opportunity to yell “nice footwork, Antonio!”.

So, keeping in mind that the characters and relationships are 95% of what makes Dancing with the Stars compelling (the other 5% is the foxtrot; love me some foxtrot), I’ve taken it upon myself to cast the overdue all-star season that’s sure to come soon. Using only stars from season 16 and later (season 15 was the last all-stars) and strictly keeping people in their original pairs, I figure the only way to do this is to start by creating a perfect cast of pros (I’m going with a cast of 10) then assigning an all-star partner from there.

Let’s start with the obvious ones:

Derek Hough- there is no Dancing with the Stars without Derek Hough. I mean, there literally is because he’s too busy and too big for the show at this point and is at the very least not returning for season 24 on account of joining the judging panel for some other dumb show that will be cancelled soon, but this is all-stars dreamcasting and there is just no way that happens without the objectively best pro. He’s tough, he’s charismatic, he knows how to play the game, and he’s a killer choreographer. Six different pros share second place for having won the mirrorball twice each. Derek has won six times.
All-Star Partner: Bindi Irwin
Derek has by far the best pool of possible all-stars since season 15 with Amber Riley, Kellie Pickler and Amy Purdy all in the mix as serious contenders (it broke my heart not to throw Amber in with another partner; that girl was incredible) but you’ve gotta go with Bindi, not because she’s the best dancer of the lot (I think both Amber and Kellie were better) but because her once-in-a-generation spirit totally unlocked Derek and made a standout character out of the show’s usually slightly chilly perfectionist.

Valentin Chmerkovskiy- my favourite professional dancer in the lot, Val started out in the shadow of his (so not on my all-star list) older brother but slowly came out of his shell to prove he’s not only sweeter and sexier than Maks but he’s the better partner and maybe even the better dancer.With Rumer Willis he proved he’s got the chops to challenge Derek’s win record. With Ginger Zee and Laurie Hernandez back to back in 2016, he proved he can do so while winning over all the hearts. He’s also a ballroom classicist who refuses to surrender content for theatrics, which I appreciate.
All-Star Partner: Ginger Zee
Again, so many great options here. Basically any of Val’s post-S15 partners except maybe Tamar would make pretty good all-stars. Character-wise, Laurie was to Val what Bindi was to Derek and there’s no arguing with Rumer as the best dancer, but the infectiously positive Ginger was the best of both worlds (and this cast already has Bindi so Laurie or Zendaya would be too much teenager).

Mark Ballas- where there’s a Derek, there has to be a Mark. Their brotherly dynamic is far more interesting than the Chmerkovskiy’s actual brother dynamic and I love Mark’s long-history tension with Julianne on the panel as well. But, mostly, he’s a great partner who always develops a lovely bond with his star and brings lots of creativity to his routines. He’s a sweetheart and a show-stopper, an all-star must-have.
All-Star Partner: Paige VanZant
No contest. Their chemistry was killer and her strength totally unlocked his creativity. A+

Sharna Burgess- my favourite female pro by a mile, Sharna is this intoxicating combination of tough but vulnerable, sharp but sincere, unthinkably beautiful but fundamentally relatable. Her partners improve by leaps and bounds every single season and sing her praises loudly at every single turn. The fact that she’s made it to at least the semi-finals every one of the last four seasons (and even placed second on a bum knee this year) is no fluke. The fact that she hasn’t won yet is bananas.
All-Star Partner: James Hinchcliffe
If you know me at all, you know it pains me to not cast Nick Carter as an all-star; Backstreet Boys are literally the only thing in the world I still go totally fangirl for. There’s also definitely an argument to be made for Noah Hawley or even for Antonio “Boomin!” Brown. But I was living for adorable Canadian race car driver James Hinchcliffe and his self-effacing charm and perfect frame all season. I was especially living for his relationship with Sharna, a bond so intimate and immediate that I quickly started shipping them, which is not a thing I do or a word I use.

Those are the must-haves. So we still need 2 male pros and 4 female. Onto round 2…

Witney Carson & Lindsay Arnold- lifelong best friends, So You Think You Can Dance alums, and Barbie Drill Sergeant MVPs, Witney and Lindsay are fun and goofy but tough as all get-out as they turn mediocre dancers into pretty damn good dancers pretty much every year. Witney’s the more compelling figure (the more fun personality, the better dancer, the more maddeningly beautiful) and she’s a former winner but Lindsay is incomparably daring with lifts and more creative with choreo (she’s particularly great with freestyles) which lands her in the finale more often than Witney, though she’s never won. They’re undoubtedly the top picks in the second round of the draft and they’re definitely a package deal.
All Star Partner (Witney): Alfonso Ribeiro
No contest. Carlton was Witney’s winner and no one else comes close.
All Star Partner (Lindsay): Calvin Johnson Jr.
Also no contest. Lindsay has only had 4 partners and Calvin is by far the most interesting and the best dancer plus his strength lets Lindsay do the sort of insane lifts only Lindsay has the guts to come up with and they had a really fun relationship.

Emma Slater- the producers must have it out for this bubbly Brit because she’s always being assigned a star who has basically no shot at winning (in contrast to, say, Derek who’s usually assigned an automatic top 3 contender, or Maks who was given Meryl Davis for the guaranteed win in season 18) but year after year she makes the most of her under-age or over-the-hill (never in between) partner and reminds everyone that this is supposed to be fun.
All Star Partner: Bill Engvall
The blue collar comedian was the surprise of his season, a total dark horse who proved impossible not to root for and ended up coming in fourth when everyone expected him gone in the first week or two. Only Emma and her personality-first approach to the show could have made Bill Engvall a contender.

Karina Smirnoff- the women on this show are trending younger and younger so I like the steadfast presence of this OG pro who’s appeared in 18 of 23 seasons and never fails to whip her partner’s butt into impressive shape. Her choreography is hard, she’s constantly looking for new ideas, and she demands precision from herself and her partner. In a world of perky blondes, a season needs a fierce Ukrainian.
All Star Partner: Corbin Bleu
It’d been awhile since Karina had been assigned an energetic youngster with a dance background who could shoot straight to the top so Karina met Corbin Bleu at his energy level, brought her choreographic A-game and her toughest coaching tricks and pushed him to meet that potential. They finished strong with an amazing Michael Jackson freestyle and just barely missed the trophy in one of the most competitive seasons in show history. Corbin is not only a shoe-in all-star but he might just be my winner pick.

Tristan MacManus– this adorable Irishman has only danced in two seasons that qualify for this round of fictional all-stars but he’s always been one of my favourites. So charming, so supportive, so sensitive, so outlandishly hunky. His partnership with the all-star I’ve picked for him might be my all-time favourite DwtS pairing.
All Star Partner: Valerie Harper
She only placed 10th but Valerie Harper danced with a terminal cancer diagnosis and was an unbelievable ray of light on the show, creating some of the most moving moments of television I’ve seen in a very long time. I couldn’t imagine an all-star season that didn’t include her.

Tony Dovolani- he doesn’t push his partners hard enough to make a winner out of a longshot and his choreography isn’t the most challenging but, if you’re intimidated about going on Dancing with the Stars, Tony is the guy you want. He’s so sweet and kind he could settle the most rattled of nerves. The right partner really flourishes when faced with Tony’s unconditional support.
All Star Partner: Leah Remini
Leah was so funny and refreshingly terrified to be on the show, letting all her vast insecurities hang out for the world to see, which of course perfectly showed off what makes Tony a great partner.

So, that’s 10 stars drawn from 5 seasons (a little heavy on 17 but oh well) with both racial and age diversity; 3 athletes, 4 actors, a comedian, a meteorologist and a conservationist. Sign me up!