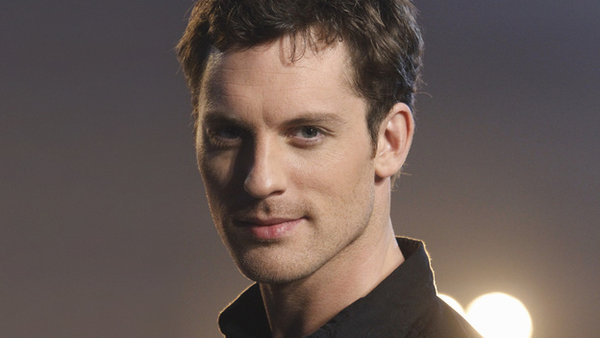 Tristan MacManus is the best looking male pro in Dancing with the Stars‘ lineup of incredibly good looking pros (and has a dreamy Irish accent), but that’s not why we like him. He’s a world-class ballroom dancer with great stage presence and charisma, but that’s not why we like him. He’s a good choreographer who knows how to play to his team’s strengths and how to work a gimmick, but that’s not why we like him either. We like him because he’s a quintessentially great partner- compassionate and patient (despite never being assigned a star likely to win the mirrorball) and supportive in all figurative and literal ways. He plays to his star’s strengths and listens to their fears but isn’t afraid to push them when he needs to. He’s sweet and never afraid to look a little bit goofy. He’s who we’d want teaching us how to dance.

Opposite 74-year-old Valerie Harper in season 17, Tristan made his biggest impression yet. The show’s best cast in years was highlighted by the sitcom legend choosing to embrace life in the face of terminal cancer. Brave, adorable, and sporting the best attitude anyone could imagine, Valerie took Tristan’s steadying hand and waltzed wobily into the hearts of everyone watching. Her dancing was never great, but that was overwhelmingly not the point of this partnership. The way she talked about everything he did for her, the way her courage brought him to tears during a particularly tough rehearsal, the way she applauded constructive criticism and he playfully shut her up when she kept talking over the judges, the obvious mutual affection and the inspiration they drew from one another- Valerie & Tristan was truly one of the great partnerships in the show’s history, even if they only lasted 4 episodes.

The pro half of this My TV Award-nominated Best Reality Team took a few minutes out of his life as a newlywed (cue the tears) to talk about dancing with his star (please forgive that cheesy line, we couldn’t resist).

When did you first start dancing? Why ballroom?
I first started dancing when I was 9 or so. It’s not something that I ever chose to do; my grandparents where social and then later competitive ballroom dancers so myself and my sister used to go along with them and I guess they just put us in it I don’t have too many memories of it, though, just that I had new friends to mess around with.

Did you have one specific partner or coach who was really important to becoming the dancer you are today?
I didn’t actually have too many coaches and partners to be honest. I wasn’t really a fan of competitive dancing, but I had good coaches. The most influential coach would have been years after the competitions, when I just danced for fun, and that would be Jason Gilkison and Peta Roby. They completely changed everything for me and changed my direction and thought process, they were unbelievable. I only knew them as my bosses and teachers whereas everyone else knew them as world champions. I was out of the loop, [Laughs].

A lot of professional ballroom dancers come from Eastern Europe but there don’t seem to be many from Ireland. Why do you think that’s true? Do you ever find that there’s a bit of a culture clash since you’re often the only Irishman in the room?
No, for sure our cultures are quiet different but a lot of our values are the same. There are a lot of eastern european dancers everywhere, now in Ireland as well. I have been out of that scene for so long I’m not sure how big or small it is but Ireland has produced some great dancers over the years. I think with dancing in Ireland there needs to be, for ballroom dancing to work, there needs to be a spectacle of some sort to make it more appealing- just as the interest in Irish Dancing is through Riverdance.

You did a lot of competitions and touring productions before starting on Dancing with the Stars. What would you say was the highlight of your career before the show?
Yeah I have been very lucky- I loved travelling the world with Burn The Floor, so they were for sure highlights. I would love to do more work in Ireland though- my highlight was for sure representing Ireland in the world championships. I would love to do something that would require me to stand as the Irish national anthem plays- that would be an ambition and goal.

What’s your strongest dance and why?
I’m not too sure to be honest. I love waltz and rumba, foxtrot for sure, the laid back dances suit me more and story-infused dances. I love simplicity over flash.

How did you land the Dancing with the Stars job?
I was touring at the time with Burn The Floor and I just got lucky I guess. When Burn The Floor played Broadway, they used a lot of dancers from DWTS as headliners, so that opened all those dancers up to the producers. Then it was an easy go to when they needed or wanted a freshen up of cast and I got lucky that they wanted someone new and I was around. I went for a social interview and bobs your uncle I got the gig and am still hanging around, [Laughs].

How are the celebrity partners assigned? Do you think there’s a pattern to whom you’ve been dancing with?
I guess there are a lot of factors that go into pairing people; I dont think too much about it. The pattern that people see is older [partners], but I think the pattern is patience and getting people who more socially and personality match me. I’ve had great times with all my partners, really interesting people with more to them than we know. I wouldn’t change it.

So you’re assigned a partner who’s never danced before in their life- where do you start?
I always start with getting to know my partner- not the TV version of why they want to dance and what they want to achieve but actually get to know them more- find out what they like. Then I relate what they do in their day to day life to dancing and it becomes easier. If I know what they want to get from the experience then that’s what I work towards. It’s frightening when you are doing something you never did before but if you do what you have been doing all your life, to music, you are golden, if that makes sense!

Is the music assigned or do you get any say? What was the hardest track you’ve had to choreograph to?
You can for sure suggest songs. I think the producers have an idea of what they want from the celebrities and what they want their audience to know, so there must be a blueprint of songs. But basically you give a list and they have their list and try find compromises here and there. Some songs fit people as people and some songs suit certain situations they develop as the show goes on. “The Devil Went Down to Georgia” was pretty tricky with Nancy [Grace] and “Bohemian Rhapsody” with Gladys [Knight]. I love both songs, just the circumstances didn’t really help us at the time. [Laughs].

The pros arrange everything from the choreo to the costumes, right? What’s your favourite gimmick or character you’ve gotten to do?
I loved dressing as David Ruffin in Motown week- Katherine Jenkins thought I was Austin Powers; that always makes me laugh. But my favourite was Halloween with Nancy and I was done like a voodoo witch doctor. I loved that costume. And the Freddy Mercury was pretty cool, bar them tight whites [Laughs].

Do you have a favourite routine from the show?
I loved dancing with Derek [Hough] and Kellie Pickler in our paso, but the waltzs I did with Karina [Smirnoff] and Peta [Murgatroyd] I loved. And a few rumbas with Kym [Johnson] I really enjoyed.

Your partnership with Valerie Harper was so beautiful to watch. What was it about her that you connected with so deeply?
Valerie is just an amazing person. I connected most because she has done it all in her career but is the most down to earth person and genuinely a kind hearted thoughtful person. Very very intellegent but interesting person. I always try find out as much as possible about my partners and who they are but Valerie did the exact same and that dosent happen too often. She sussed me out straight away.