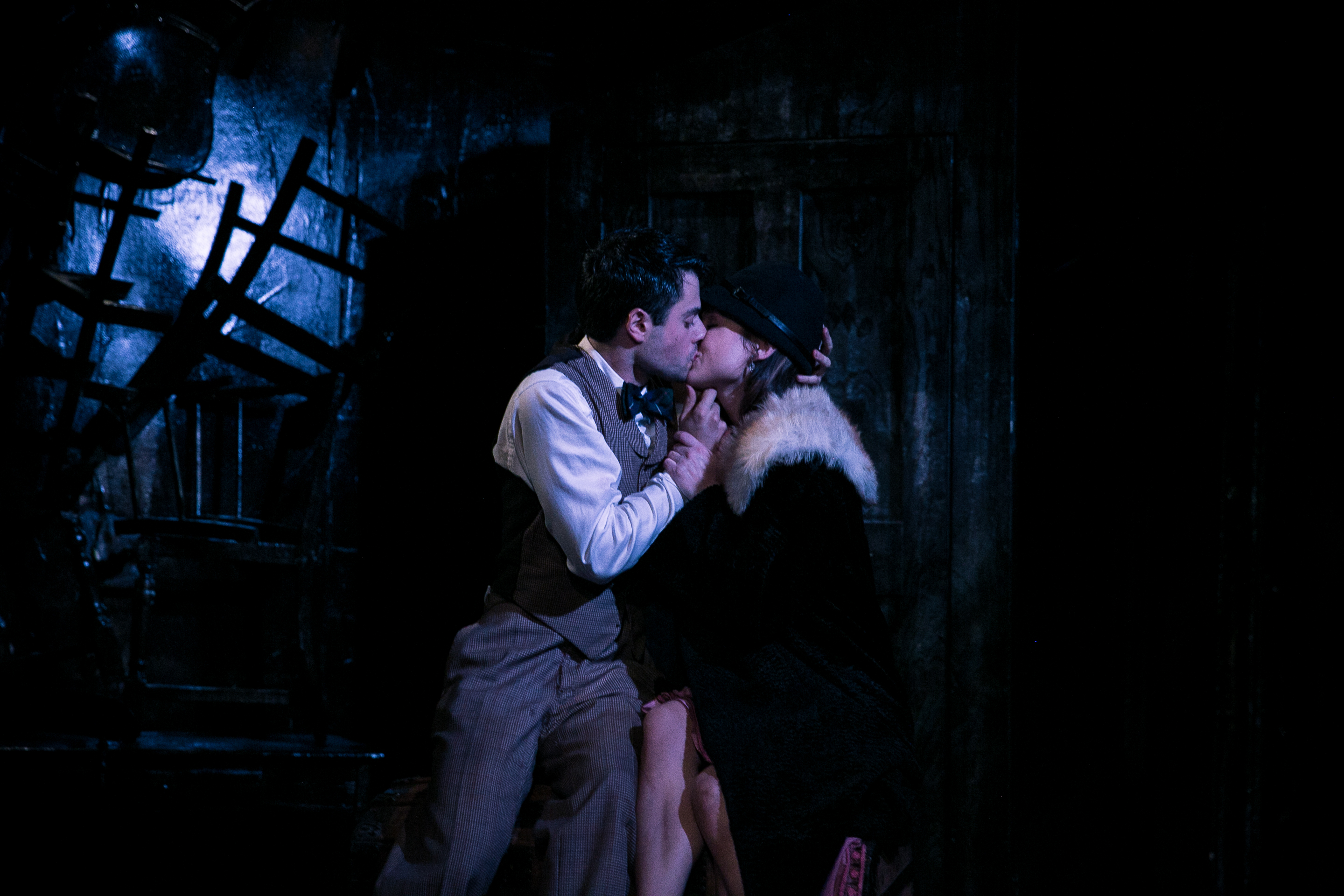 Am I the only person who actually enjoys clichés once in a while? I mean, not every production is the most inventive but is that really the worst thing? When your job title is “critic” it can be difficult to just…. enjoy. Old Red Lion Theatre’s production of Benighted reminded me that sometimes a cliché is exactly what you need.

Benighted took me right back to my summer holidays reading Agatha Christie by the beach. Adapted for the stage by Duncan Gates from the 1927 novel by J.B. Priestley, Benighted tells the story of Mr. and Mrs. Waverton (Tom Machell and Harrie Hayes), their friend Roger (Matt Maltby), the wealthy William Porterhouse (Ross Forder) and his date, Gladys Du Cane (Jessica Bay) who, stuck in a landslide in the middle of Wales, must leave their cars and seek shelter in a spooky looking house on top of a hill.

Now, I’m not British and had no idea before looking Priestley up that he is the writer of the quintessential British play that every child must read in school, An Inspector Calls. In a sense, this is like going to see an Arthur Miller play without realizing that you’re about to see something by the playwright behind Death of a Salesman. I had no expectations before walking into the theatre, which worked in the production’s favour.

The stage at the Old Red Lion is tiny. Thankfully, director Stephen Whitson (with help from set designer Gregor Donnelly) works well with what he has and manages to turn the stage into a car, a porch, a scary bedroom and a living room with a fireplace. All this is accomplished with just a few props- a steering wheel for the car, a door, some suitcases- and excellent lighting and sound design (Zia Bergin-Holly and David Gregory, respectively). Literally, in the first moment of the show, everyone jumps from their seat on account of thunder and lightening. You have been warned, I wasn’t.

It’s hard to tell if all the laughs are intentionally earned but the whole audience, myself include, laughed throughout the entire production. As I mentioned before, this play is a cliché. From the cute love story between Roger and Gladys to the candlelight death warnings made by Rebecca (Ross Forder), the old religious lady wearing black lace from head to toe, the production has every cliché in the book. My personal favourite was Morgan the butler (Michael Sadler) who does not speak and is known to act “savage” on stormy nights when he drinks too much. I could go on to mention Horace Femm (Sadler) who always stares into the horizon in his plaid house robe but I need to stop. The stereotypes are so bad that they’re good, if that makes any sense at all.

The cast does a good job bringing the stereotypes to life; I’m not going to say they deliver the best performances of their careers but they’re not the worst either. The problem is that everyone is laughing in the room so it becomes an issue of intention and whether the performers’ straight-faced melodramatics are earnest or self-aware.

The plot, similarly, lacks subtlety. The unlucky travellers decide to play a game of “Truth” where everyone needs to answer a question, the literal easiest way possible to get the truth out of the characters. Even though it’s predictable, the character development is well executed. Mr. and Mrs. Waverton go from being a bickering couple to a pair fighting together trying to save their lives, Mr. Porterhouse opens up about why he buried himself in his work, and Roger loses some of his cynicism at the sight of the lovely Gladys.

I like murder mystery novels, I enjoyed And Then There Were None, and I love a 1920s setting. So maybe I’m biased but I recommend Benighted for a fun night out, if you can handle the clichés. For those who prefer alternative or experimental theatre, Benighted isn’t worth it but, if you’re a sucker for an old-school mystery, it’s a good choice.

Benighted plays at the Old Red Lion Theatre until January 7th. Get your tickets HERE.