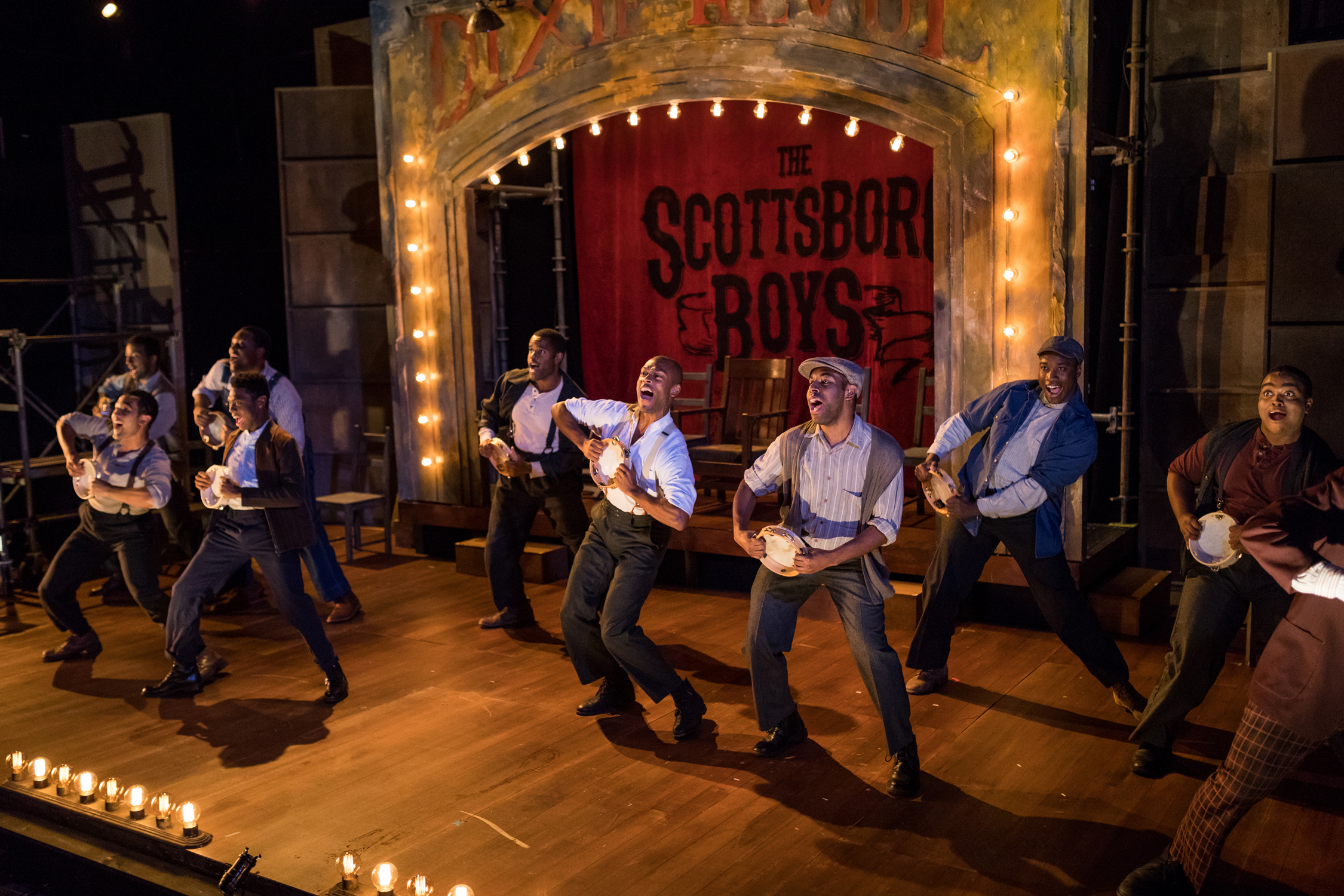 When I rewatch the film Cabaret, I still find it difficult to listen to the final stanza of “Tomorrow Belongs to Me.” It doesn’t matter how beautiful the young German’s tenor voice is; even if he didn’t have a swastika band on his uniform shirt sleeve, even if he wasn’t raising his arm in a heil salute, there is unmistakable menace in the collective picnic-goers bellowing in unison:

John Kander and Fred Ebb intended that dissonance. In musicals like Cabaret and Chicago, the pair proved adept at juxtaposing the jolly and the aesthetically pleasing with grotesque social reality, to brilliant shocking effect.

But it only works if you question the beautiful voice once you see the swastika. It’s troubling to think that we may be less attuned to other red flags in historical entertainment.

I thought of this as SpeakEasy Stage Company’s production of The Scottsboro Boys got underway (music and lyrics by Kander and Ebb, book by David Thompson). The show is directed by Paul Daigneault, musically directed by Matthew Stern, and wonderfully choreographed by Ilyse Robbins. While not as visceral a punch in the gut as a play like Branden Jacobs-Jenkins’ An Octoroon, Scottsboro Boys is a powerful and vivid reminder of racial injustice both past and present.

Nine black men take the stage to open the show (Darren Bunch, Taavon Gamble, De’Lon Grant, Sheldon Henry, Wakeem Jones, Steven Martin, Darrell Morris, Jr., Aaron Michael Ray, and Isaiah Reynolds). They caper, they leap, they kick their feet and shake their tambourines and sing a catchy melody. The shenanigans are led by a white Interlocutor (Russell Garrett), with the help of his henchmen Mr. Tambo (Brandon G. Green) and Mr. Bones (Maurice Emmanuel Parent). That’s right: you are watching a full-on minstrel show, and it’s damn hard not to tap your feet to the tune.

From the opening number, the musical does not let us forget that the dances/songs/performance choices have deep roots in black minstrelsy. As Claire Whitehouse writes in the dramaturgical notes for the show, the creators “are using racial stereotypes to tell a story about men who were racially profiled; they are making a troubling tale entertaining, and they are asking the audience how they feel about watching such a spectacle.”

On March 25th, 1931, nine black men riding a freight train were falsely accused of raping two white women on board. Shockingly, they were not lynched. Not shockingly, they were not exonerated of the crime they did not commit until years after their deaths. Their story is a riveting tale of injustice, racism, perseverance, and incredible courage on behalf of many involved in their numerous trials. The musical takes us from the day of that fateful train ride to the outcome of each of the boys’ lives.

This production is fleet and economical in its staging, with the actors making great use of the unyielding wooden chairs and scaffolding that make up their only set pieces (scenic design by Eric Levenson). Green and Parent are particularly adept in their constant character shifts, playing deputy and sheriff, lawyers, and prison guards, most to great despicable and clownish effect. Among the other actors, Morris, Jr., is particularly amusing as the haughty and lying Victoria Price, as she eggs on her fellow prostitute companion Ruby Bates (Reynolds) to accuse the nine boys, whose individual stories we come to learn and sympathize with over the course of the show.

While the show always manages to balance its humor and melodic virtuosity with its satirical critique, I will confess I was disturbed by some of the freer audience guffaws that rang out when Mr. Bones and Mr. Tambo ambled about on stage as some manifestation of trigger-happy law enforcement. These were not the appreciative chuckles of the rest of the audience, but loud laughs over the amusing antics of black actors wearing white gloves, colorful suits, and funny hats.

The musical does not just remind us of continuing racism against black people. The anti-Semitic smearing of Samuel Leibowitz (Green), the defense attorney who took on the boys’ case, in the middle of one of their several trials, felt both shocking and unsurprising. The moment reflects the bitter reality of the justice system portrayed in another recent cultural work.

The TV show The People v. OJ Simpson: American Crime Story portrays a legal outcome completely inverse to that of the doomed Scottsboro boys. OJ Simpson had status, financial privilege, and power that protected him from the consequences of his own crimes. But the FX dramatization brutally demonstrates how a lawyer’s deft manipulation of a trial’s narrative can become far more relevant than facts and evidence shown in court. Simpson walked free; the boys remained behind bars. “Justice” was served.

The Scottsboro Boys ends on a hopeful note. A woman (Shalaye Camillo) who makes various appearances unnoticed by other characters throughout the show, sits on a chair onstage. A bus driver tells her to get up. She refuses.

The reference to Rosa Parks is moving, to be sure, especially after all that has come before. But it made me feel concerned. We as an audience are not allowed to stay with the helpful discomfort of the previous two hours. Ending the show with a nod to the the soon-to-come mid-century civil rights movement helps reinforce the idea that racial inequality is a thing of the past. Thank goodness people like Parks and Martin Luther King Jr. are on their way, so we can all forget about this pesky blackface thing. This pesky racism thing. This pesky injustice thing.

Anyone watching the current news cycle knows we could not be further from being a “post-racial” society. It’s up to us to remember the blackface. To remember the swastika. To be disturbed. To pay attention.

SpeakEasy Stage Company’s production of The Scottsboro Boys is playing now through November 26, 2016, at the Calderwood Pavilion at the BCA.