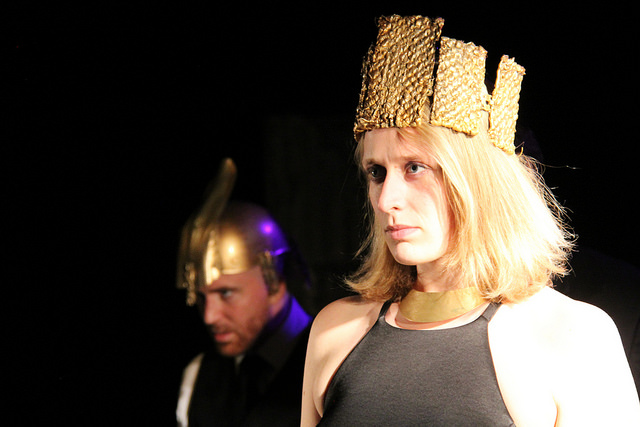 If it takes seven people to tell a story, you hope it’s a good story. Luckily, The Ritual Slaughter of Gorge Mastromas is a good story and a gripping performance. At the start of the production, the audience is tremendously confused. There is a guy named George who had bad luck in love and in life, but why do we care? And why on earth are there seven people telling the story? Why is everyone moving around all the time? The actors are dressed in business wear but each costume has an accessory, from a large golden belt to a golden leaf crown. Yet despite all of this confusion, the spectators are hooked. For some reason, they want to know who Gorge is and what will happen to him next. He falls in love with Vanessa, he cheats on Tanya and he falls madly, but for Louisa. In the midst from all this, he goes from being nobody to an incredibly rich man with sociopathic tendencies. Themes of greed, love, and treason are beautifully intertwined throughout the evening. The main dichotomy revolves around goodness or cowardice. The choice seems obvious but it is not so clear during the show which value the spectators should vouch for.

Lorenzo Peter Mason’s directing is quite clever. He somehow manages to have all actors onstage telling a piece of the story and it is anything but dull. In fact, when one of the actors leaves, the audience is saddened. With time, they come to enjoy this unorthodox form of storytelling. It changes as the evening progresses. Suddenly, each storyteller becomes a character in Gorge’s life. From the mysterious woman with superpowers who convinces him to financially ruin his boss to his less fortunate brother who pays him a visit, they all play a part in it. The cast is strong and they portray their characters with great ease. There is also something intriguing about Jonathon Cooper’s voice in his portrayal of Gorge; he has a particular tone that emphasises the mystery of his character. Each actor, too, deserves praise. There really is no one performer better than the other.

To say that this is a dark play is an understatement. The actions taken by Gorge seem inhumane and immoral most of the time. Then again, this is what makes the play so fascinating. It leaves audiences questioning major themes both intellectually and psychologically. Does money bring happiness? Does goodness or cowardice matter more? How do we use people in our day-to-day? The Ritual Slaughter of Gorge Mastromas promises consummate performances, vivid visuals and above all an interesting evening.