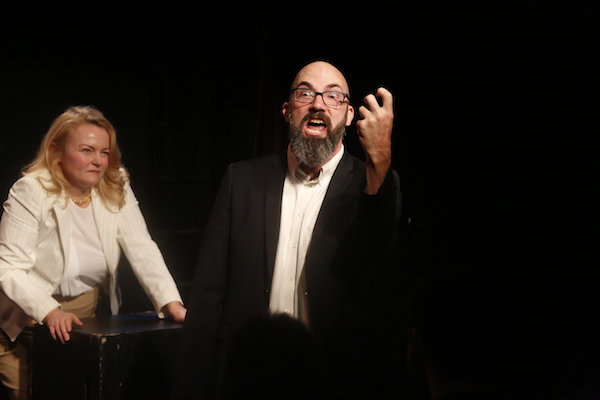 The 2016 American election has produced a plethora of absurdities – occurrences so outside the realm of fathomable civil conversation and political discourse that we might as well have been transported into the Dune universe. Because of the bizarre antics of the candidates,* parodying this election season almost seems a fruitless exercise. A lowball not worth the effort needed to swing. Yet, comics, satirists and artists have risen to the challenge. Among them is Clay McLeod Chapman whose Pumpkin Pie Show production has been running strong for two decades. Taking satirical aim at the themes of this year’s Presidential election, The Pumpkin Pie Show: Stump Speeches is a series of related stories, presented with few props and limited costumes, that envision an American election filled with chilling horrors and fanciful science fiction-inspired events. In a normal year, this would sound like pure fiction – but, in 2016, Stump Speeches feels almost plausible at times.

Stump Speeches is presented as a Presidential debate in three acts, with brief interludes examining the lives of first ladies and voters. The first candidate: a white male misogynist who views women as sexual objects and cannot help rambling through a response. The second candidate: a tough as nails woman who has been serving the public for 30 years and who may or may not be a witch, depending on who you ask. I am sure that any resemblances to real people or events is purely coincidental. However, art does not precisely imitate life in Stump Speeches. The candidates’ responses to debate questions, while appearing normal at first, or what passes for it these days, quickly take a turn for the bizarre, revealing far more sinister subplots involving human sacrifice, occult activity, otherworldly interference and an onslaught of other shocking surprises. Between Presidential battle rounds, civilians weigh in on the political monstrosity that is the election cycle. From a high first lady sharing a dark secret about her husband’s road to the White House to a rally-goer who treats the horrifying dismemberment of a protestor with gut-twisting indifference, each storyline grows from a familiar occurrence in today’s political climate, weaving just enough believable rhetoric and social commentary into the horrific narrative that, at times, the storyline does not seem all that far-fetched.

Chapman’s work excels at its most subtle. The scenes “hocus flotus” and “Posterboard” are high points in the production, featuring single actors in their story-telling element. Both build slowly to their startling revelations and are appreciably balanced between human-interest storytelling and the macabre. This counterbalance makes the moments of horror all the more shocking and, in an uncomfortable way, hilarious. While the debate rounds between the candidates embrace a similar structure, the scenes are more apt to dwell in their garish plot “twists” for a bit longer and, in some cases, a bit too long, causing the shock value to wear off and the narrative to grow a bit tiresome. However, these are minor critiques to an otherwise diabolically entertaining and unsettlingly funny show.

The ensemble of Stump Speeches embraces its ludicrous plotline with sincere gusto, displaying extravagant idiosyncrasies and bizarre behaviors throughout, yet, when a scene demands it, they come across as quite ordinary – harmless, even. Highlights include Clay McLeod Chapman whose passion for his boisterous, bullshit spewing Trump-alike creation is evident. He shows no restraint in regaling the audience with his character’s grizzly sermons and appalling appetites. Another welcome presence in the cast is Hanna Cheek whose portrayal of a high first lady ready to share her inner demons with the incoming first spouse is delightfully well-constructed. From her physical comedy choices to the pleasant, if intentionally tongue-tied, cadence in her voice, Cheek’s performance is one that I could watch again and again. However, it is Susan Ferrara’s soft-spoken and reserved take on a political rally supporter that stands out in this production. Ferrara could be chatting with a friend over a cup of tea rather than recounting the violent goings-on of a political rally,** and it is her casual, innocent delivery of the tale that makes the scene so unnerving (in the best possible way).

Reviving the Pumpkin Show tradition with tenacious energy, sharp wit and an appreciable recognition of the real horrors confronting Americans in this election cycle, Stump Speeches is a morbid delight – a caricature of American politics in the form of a science fiction feature or classic monster flick.