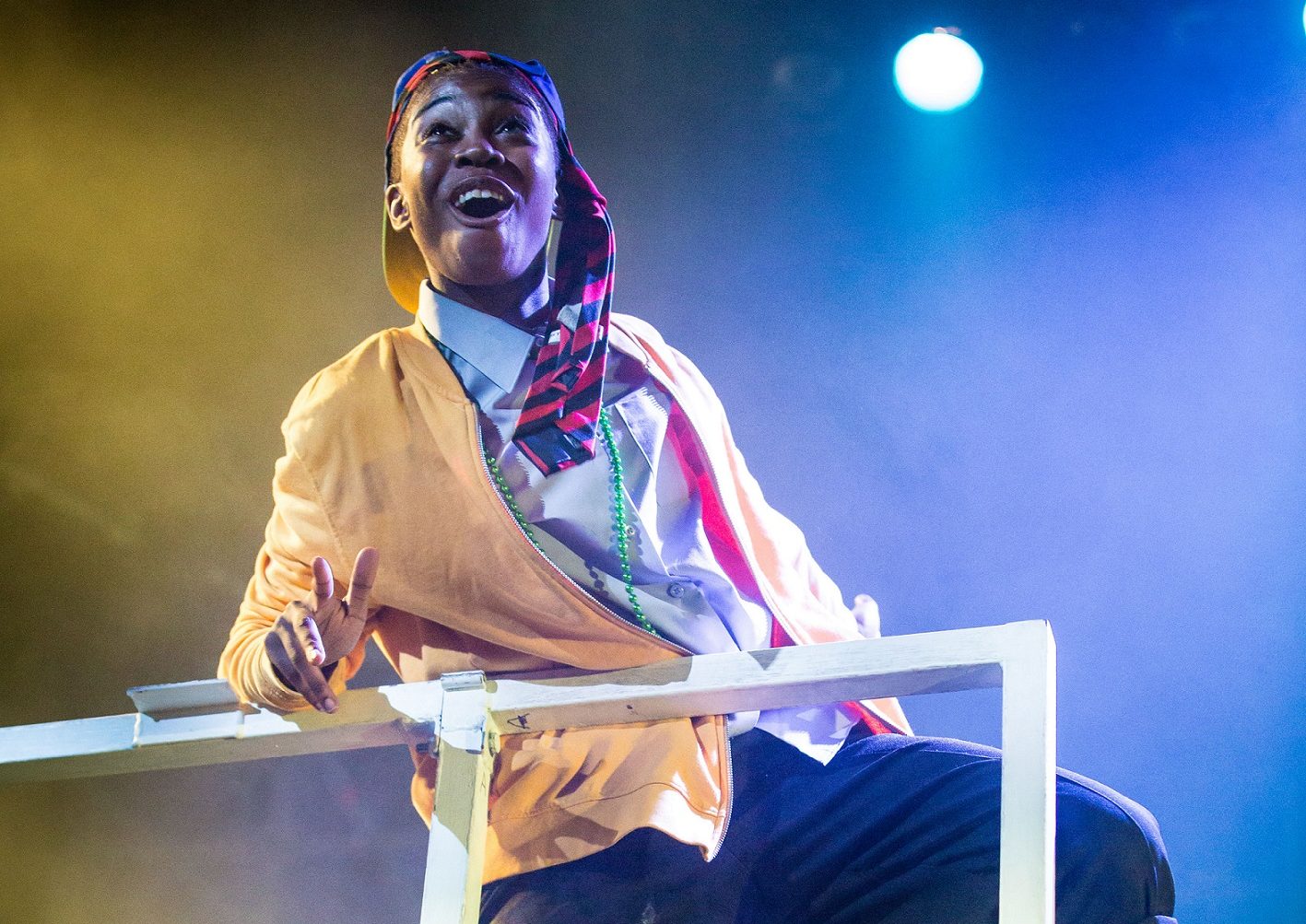 Adapting a novel for the stage is certainly no easy feat. Sacrifices and changes must be made to slim down what can be a lengthy and detailed narrative into a coherent, streamlined and more visual medium. The risk lies in the impact this conversion can have on the end-product, specifically whether what works on the page can necessarily translate to the stage. Pigeon English largely tackles this risk in providing an enjoyable enough commentary on life for young people growing up in a non-descript London housing estate. However, not all of this transition is successful and some rough edges remain in this adaptation of Stephen Kelman’s 2011 Man Booker prize shortlisted novel.

Pigeon English centres on a young Ghanaian pre-teen and his intersections with other denizens of a typical Inner London housing estate (largely local authority subsidised housing similar to the ‘projects’ of the US). Harri (Seraphina Beh) is the central protagonist in a wide ensemble cast made of members of the National Youth Theatre’s REP Company. He is a recent immigrant from Ghana, living with his mother (Chinenye Ezeudu) and sister Lydia (Daisy Fairclough) in a small flat within ‘Luxembourg House’. Addressing the audience directly throughout with fourth-wall breaks, we follow Harri’s initially innocent experiences of life on the estate as they are challenged by external forces and the harsh nature of the environment in which he finds himself. It is a somewhat tragic nurture-over-nature tale, as a youth on the precipice of manhood is dragged into the violence and grit of his surroundings. That is not to say that the story is entirely dark—there are elements of camaraderie and good-nature and the play is certainly not bereft of light-hearted fun. It is slightly unfortunate, however, that perhaps owing to the play’s transition from its novelistic forbearer, some scenes do not add much value to the narrative and balancing issues persist throughout the play’s duration. Nevertheless, the plot moves along at a fairly brisk pace and the central story arc remains fundamentally an interesting one.

Seraphina Beh provides a strong performance as Harri, a demanding and certainly challenging role for a young female actor. She does well in providing a central anchor for the piece, showing a good degree of variation and presenting an empathetic reference point for the audience. Anna Niland’s direction also deserves credit for managing the large and varied ensemble through a great many scenes, though perhaps relies a little too heavily on some extended choreographic and physical pieces that don’t always fit with the aesthetic the play runs with. The cast itself are also pretty solid and there are strong characterisations in the form of the good-natured, if a little ditzy, Dean (Felix Mackenzie) and the only-mildly-veiled threat of Kwammi Oddoom and Michael Kinsey’s ‘DFC’ gang members. Other characters sometimes stray into the caricature, though by-and-large the young cast deserve plaudits for their varied and animated performances.

Pigeon English offers a good insight into life in challenging circumstances and its performances from the talented members of the National Youth Theatre’s REP certainly add weight to an interesting central narrative, even if it meanders around a bit. Sure, it may have some rough edges, but Pigeon English is certainly worth your attention during its brief run.