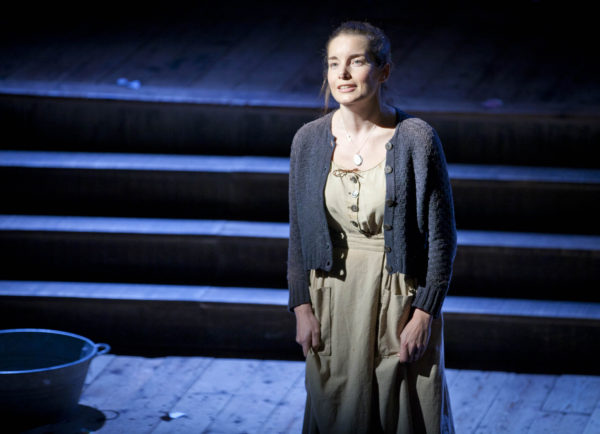 A very accomplished production of a show that boasts an utterly enchanting score, Floyd Collins is sophisticated, intriguing and beautifully performed with some truly breath-taking moments.

It is clear that every detail of this carefully produced musical has been considered meticulously, with the piece emanating waves of meaning and feeling. Instantly you know you are in safe hands when the chorus start blissfully singing their opening number and thrust you into dusty 1920s Southern America where the story is set. The venue itself, Wilton’s Music Hall, plays a big part in creating the atmosphere, with its tall, rustic walls and beautiful wooden spiral pillars—a spectacle themselves before the action even begins.

The musical is based on the true story of a caver living in Kentucky, desperate to make his fortune spelunking and mining deep below the earth. When he finally finds the cavern that he has been searching for, his joy is short-lived as he gets trapped on his way back above ground. The show then follows his family’s attempt to reach and free him and the 17 days he spent trapped in the cave.

Every member of the 13-strong cast give it their absolute all, their voices blending wonderfully as an ensemble to deliver some magnificent harmonies and collectively creating an emotionally engaging piece of theatre. Adam Guettell’s beautiful score is challenging, not shying away from incredibly difficult melodies and, barring the occasional minor fumble, the whole cast not only manage to tackle it, but do so effortlessly. Influenced, to some extent, by bluegrass and country music, his creation really is a work of art and demands only the finest singers to portray its worth, which it certainly is blessed with in this production. Musical Director Tom Brady should take pleasure in the sound his cast and band are able to create.

Ashley Robinson mixes optimism and hope, with despair and sadness, as Floyd, developing his character well as his time trapped in the cave prolongs. Guetell cleverly incorporates echo into his music, taking advantage of the cavern setting, and this is where Robinson is at his best, dueting with his own echo to produce a captivating sound. Alongside the lead protagonist, Samuel Thomas and Rebecca Trehearn, as his brother and sister, stand out from this strong cast, both providing heavenly vocals throughout. Trehearn in particular is irresistible as the quirky and loving Nellie, making the enormous auditorium seem small and close during her solo numbers. The sibling trio have heaps of chemistry with each other and are a joy to watch when sharing the stage.

One criticism to pick out of this almost faultless show is that Tina Landau’s book seems to prioritise style over substance, stretching the source material a little far and leaving some moments feeling a repetitive or slightly dull. Character development is also an issue, though this doesn’t prevent you engaging with the Collins family and their struggle over the relatively short timescale. Director Jonathon Butterell does a great job with the script, making the most of both the funny and emotional moments and getting everything possible out of his actors. He uses the levels of the simplistic set to create many aesthetically pleasing tableaux and ensures the period piece never deviates too far from its roots. More than anything, the production looks good: from the costumes to the set, to the lighting, to the theatre, to the staging, everything looks and feels right.

This is the kind of show that reminds you how much depth there is in the musical theatre industry and that if you can see past the glittering lights of the West End, you can stumble across something truly special. Adam Guettel’s score is a masterpiece and is delivered by a cast and production team who know how to handle such work. The talent on stage in unquestionable, and if you are looking for something a little different from your typical household-musical then this is certainly a show worth a watch.