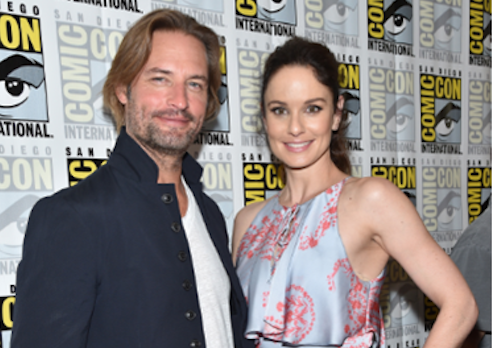 SDCC ’16: Inside the Colony Press Room

USA Network’s sci-fi drama Colony is one season into its run and already stands out as one of the most grounded and thoughtful genre pieces on the air. Set in the near future when earth has been colonized by mysterious invaders from another planet, the show balances a complex ensemble of characters working for both the Collaborators and the Resistance.

We got to speak with the stars and creators of Colony in the press room at San Diego Comic-Con this year, including creators Carlton Cuse & Ryan Condal and stars Josh Holloway, Sarah Wayne Callies, Adrian Pasdar, Amanda Righetti, Tory Kittles & Peter Jacobson.

Our favourite revelations include:
– Sarah Wayne Callies is one of the smartest stars around (with a “45 dollar word” vocabulary)
– Carlton Cuse considers Lost a “mystery show” and promises Colony will deal with its secrets very differently
– Josh Holloway is even more absurdly charming in person, which we didn’t think was possible.

The full interviews are below.