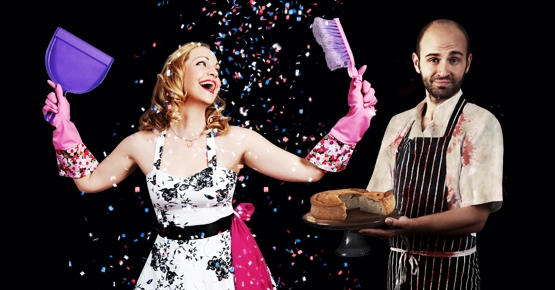 Shakespeare can sometimes seem unapproachable to a younger audience because it is difficult to understand the language in which it is written. In perfect honesty, it can even be difficult for adults to fully grasp the beauty of Shakespeare. That does not mean that younger children cannot appreciate his plays; they simply need to be told the stories differently. The Globe and Seabright Productions’ Shakespeare Untold at Wilton’s Music Hall does exactly that. The production tells the classic stories of Romeo and Juliet and Titus Andronicus through an original new perspective. In the first half, the audience is welcomed by Verona’s best party planner who spends the next hour talking about the unexpected and tragic turn of events that took place between Romeo and Juliet. In the second half of the show, it is the cook in Titus’ kitchen who tells the story as he witnessed it of Titus Andronicus. While at times, extracts from the original script are brought into this story telling, much of the text is in contemporary English and could therefore be interpreted as a butchering of the Shakespearian language. Because the play is destined for a younger audience, such is not the case. On the contrary, it allows the stories to be better understood by everyone, which should be the point of appreciating Shakespeare.

During each half of the performance, only one actor is on stage. At first, there is an apprehension that this will lead to a somewhat boring interpretation of someone telling a Shakespearian tale. But this is not the case. With the help of lighting changes and surrounding sounds for each scene, the spectators, both young and older, feel as though they can see the story unravel in front of their eyes. The party planner of Romeo Untold, Sally Lofthouse, is very funny. She is able to engage the audience with her jokes and her questions that she asks the children. Her performance is truly entertaining. It is not simply a recollection of Romeo and Juliet’s love story; it is a performance in itself. The same can be said of the chef, Tom Giles, in Titus Untold. At first he states that the audience members are all prisoners of the Roman Empire and must learn to cook by his side and quickly begins the violent and gory tale of Titus Andronicus. While the children did not seem too frightened, it needs to be mentioned that this particular play is one of Shakespeare’s most violent ones. It is therefore an interesting choice to present to young children. Nevertheless, it is well-executed and the story is quite clear. If an adult had walked into the performance without knowing anything about either play, he or she would leave satisfied and informed.

Shakespeare Untold at Wilton’s Music Hall is a delightful way to experience Shakespeare in another form. It is put on stage for children but all can enjoy it.