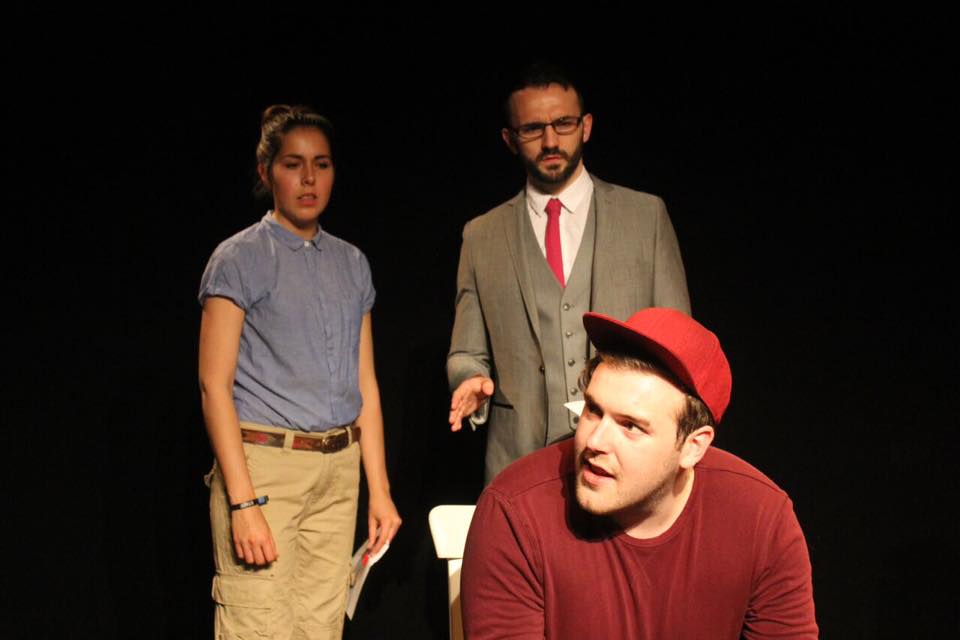 Rapture at the Etcetera Theatre

In a world where cancer and AIDS have been cured, what could possibly go wrong? This is a question addressed in the emotionally wrenching performance of Rapture at the Etcetera Theatre directed and written by Lisa McMullin. Set far into the 21st century, it is a dystopian tale of four people being audited by the government. They need to justify whether or not they contribute efficiently to society. The reason? The United Kingdom is suffering from massive overpopulation and there are no longer enough resources to sustain a population who will seemingly never die. People live to be 120 years old, adults can be diagnosed multiple times with cancer and always fight it and diseases such as Ebola and malaria no longer exist. It would only make sense that everything go well. But such is not the case.

While the décor is very minimalist, this is done purposefully to showcase the brutality of the task that the British government has put upon itself. It will “delete” members of society for the greater good of mankind. As the auditor, wonderfully portrayed by Ryan Kennedy says, “We’re not monsters, we’re pragmatists”. Kennedy’s performance provokes fear and confusion and it is outstanding. The play is emotionally difficult to watch at times. The themes brought up include violence, death, fear and loneliness in a Big Brother world. These are not ones that many wish to contemplate on a night at the theatre.

The quality of the acting needs to be emphasized. Each actor embodies different members of society and portrays them wonderfully. The emotions felt on stage are so real that the end takes the audience aback; they feel as though they have been audited as well. There is the reality TV star that feels alone in the world, played by Olivia Quinn. While at first she just comes off as dumb and clueless, the spectators and the other characters discover another side of her filled with sadness. There is the drama teacher who has no free time, portrayed by Jennifer Tyler. Her voice of hope and passion for what she does is inspiring, yet the fact that she does not live outside of work makes everyone question whether jobs or personal life are more important for society. Darryl Oakley’s portrayal of Ossie is one of a young man with a dark past who does not really know what he is living for. Finally, the politician played by Rik Grayson, lives for his constituency and his son. He later faces the realization that he, like everyone else, can be easily replaced. The characters are all fascinating because there are multiple dimensions to them. The audience thinks they know them but in reality, they know very little.

Rapture is not a fun performance. It does have moments of humor, but the horrifying plot quickly silences them. Are humans merely animals? Is medical advancement bad? These are all harsh topics but necessary to address in the world in which we live. Until June 26th, the Etcetera Theatre promises a night out that will make you stop and think.