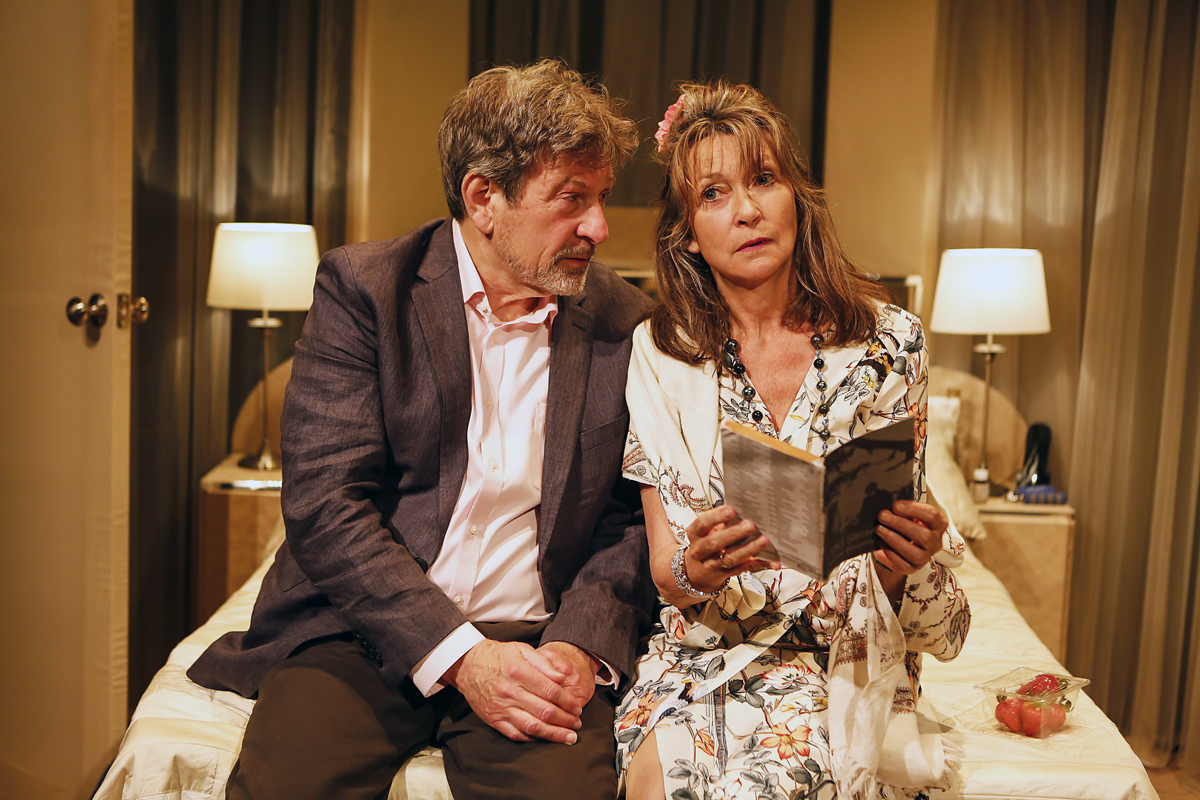 Off the King’s Road at the Jermyn Street Theatre

Like the sycophantic hotel clerk who opens the play, Off The King’s Road is too eager to please. Neil Koenigsberg’s new work wavers between the sincere and mawkish, never quite landing its desired emotional beats in spite of a capable cast. American widower Matt Browne (Michael Brandon) takes a cultural trip to London to get over his recently deceased wife. In his hotel he meets an ingratiating clerk (Luke Pitman), a not-so-subtle love interest (Cherie Lunghi) and a Russian prostitute (Diana Dimitrovici), each having an effect on his mourning process.

I believe the play forms part of the expansive genre of theatre-for-the-middle-aged, works that expect praise for signposting the common struggles of the elder generation—dead spouses, susceptibility to illness, technological ineptitude—without the depth to state anything of importance. While I have no qualms with the play’s subject, Koenigsberg’s insipid manner dilutes what could be a slow, deep take on loss and desire. Little effort is expended to learn how Matt feels about his bereavement; instead, the audience is invited to revel in references to London’s topography (‘The Tate will just have to wait’). Most enervating of all, the forced images and stilted action leave little breathing room for the actors. Brandon is especially made to spell out all thoughts and directions: though this is partly explained by the presence of his dead wife’s portrait which he talks to, it does not prevent his declaring to no-one that the pills he takes are viagra, as though the audience is too switched-off to enjoy implicit detail. Admittedly, scenes can turn on a charm, though such instances are likely indebted to Brandon’s charisma rather than deft writing.

Unexpectedly, Off The King’s Road’s proudest feats are the Skype conversations Matt has with his psychiatrist (Jeff Bridges). Although pre-recorded and suffering from some stiffness in Brandon, Bridges’ stunning naturalism perks up the rather morbid context of their conversations and makes for unique comedy in his character’s sloppy camera work.

Notably, if not some square metres too small, Claire Lyth’s set is impressively specific as an instantly recognisable four-star hotel room. Filling this space are a confident secondary cast. Though their characters pleasantly possess two dimensions rather than one, Koenigsberg will unfortunately insist on spelling out this second dimension in as explicit a way as possible—expect Lunghi’s widow to jarringly monologue on her husband’s death while in casual conversation with no distinct lighting cue to break up the naturalism. Although Pitman is somewhat meal-making as the oleaginous host, the other actors supplement Brandon well despite deserving better dialogue.

For easy viewing that may resonate superficially with laid-back viewers, Off The King’s Road is a desirable show. Nevertheless, the piece would benefit from a dialing down of plot and a more finespun handling of character. As Koenigsberg’s first play, there is voluble room for improvement.