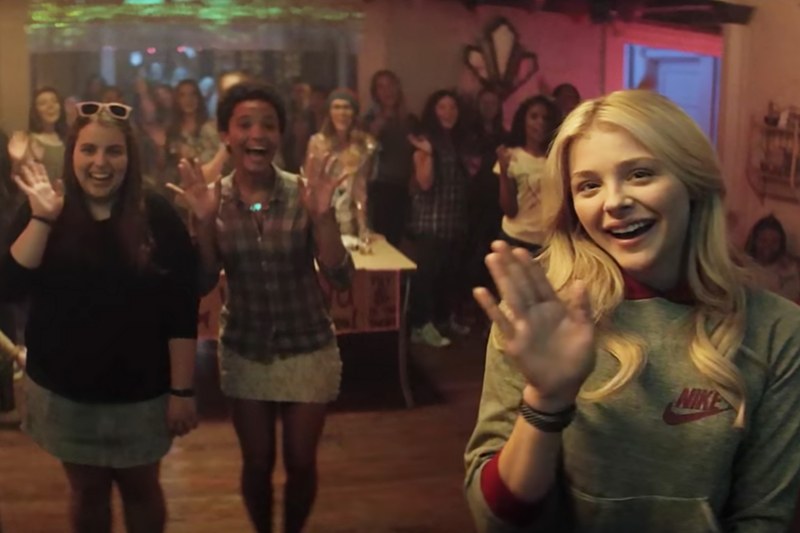 I’m as surprised as the next person to write the following sentence – I think Neighbors 2 might turn out to be my favorite movie of the year.

Now hear me out.

I never even saw 2011’s Neighbors, starring a frat boy Zac Efron and married marauders Rose Byrne & Seth Rogan. In fact, I kind of dismissed it on sight. Despite my love for the genre, I’d kind of been burned out by the whole “frat boy” thing. There was only so many times I could watch man children dance on the line of sexism and homophobia before I got bored. I’ve heard, through many people, that the movie was actually much better than that, but still it never made it to the top of my queue.

But Neighbors 2, I was told, was different. Neighbors 2 was about… lady children.

The movie takes the basic Neighbors formula and twists it – Seth Rogan & Rose Byrne in this one play parents to a two-year-old trying to sell their starter home. They’re in a bind due to their (hilarious) lack of understanding of the terms of escrow, and desperately need to sell their house. Just as they sign on a potential buyer, Chloe Grace Moretz’s pack of new school sorority girls move in next door. Zac Efron reprises his role playing the king of all fratdom – now transformed into the one lone hold out among his old group of immature friends, a man hampered by his lack of skills outside of party throwing and shirt removing.

But despite that one kind of weird moment in the trailer where a pack of girls descend on Seth Rogen’s car (prompting his wife to turn the hose on them, only “making them hotter!”), the movie’s greatest strength is how seriously it takes the pack of Sorority Girls. Chloe Grace Moretz plays a slight outcast – but not the super stereotypical kind – who comes to college looking for connection. She tries to form that connection by rushing a sorority, only to realize that the arcane rules that govern The Greek System mean that sororities are only allowed to party at fraternities. That essentially means that the Beastie Boys’ famous “Right to Party” has a gigantic asterisk next to it saying *at the schedule, venue, and theme of the men in your life’s choosing.

After attending one super lame, vaguely sexual-assault-themed frat party, Moretz and a few other like-minded would-be sorority members bugger off to smoke weed and have safer, more personalized fun in their dorm room, only to be screamed at by their psychotic RA. The stage has been set – if they want to party, they have to create their own space to do it.

So they move in next to Rogen & Byrne, and they party. And the really unique thing? They party like awesome, smart, fun GIRLS. They throw feminist icon costume parties. They watch The Fault In Our Stars. They shotgun beers and smoke weed and hold dance parties all while teaching Zac Efron’s would-be-mentor about the sexist nature of most themed parties and musing on the importance of sisterhood. They are at once just as fun as the boys AND unique in contrast to them. It’s a thing of fucking beauty.

And then the shenanigans kick in and once again Byrne & Rogen fight to try and get those damn kids next door kicked out. The prank war escalates, from calling their fathers to filling their homes with bed bugs to throwing used tampons into windows (it’s as gross as it seems and, also, strangely, empowering). Until finally, the sorority girls are defeated by their own competitive nature, deconstructing what made the house fantastic in their attempts to bring down their neighbors.

But Byrne & Rogen, who are (poorly) parenting their own two-year-old female offspring, can’t find joy when they defeat the girls next doors’ earnest attempt to find a space to develop their own identities. And so they get them back together in a scene that’s just the right side of sweet.

I don’t want to oversell the feminist credentials of Neighbors 2, because what makes it awesome is not the fact that it is a feminist treatise. It’s that it’s a really funny movie that DOESN’T FUCK ITSELF UP by being a sexist mess. Maybe it’s sad that this is so refreshing for me, but it reminded me of this Onion article: Woman Takes Short Half Hour Break From Being Feminist To Enjoy a TV Show . We are in the era of feminism as pop culture commodity, for better or for worse, and we are definitely firmly in the better camp when it leads to stupid, silly, wonderful entertainment like this.