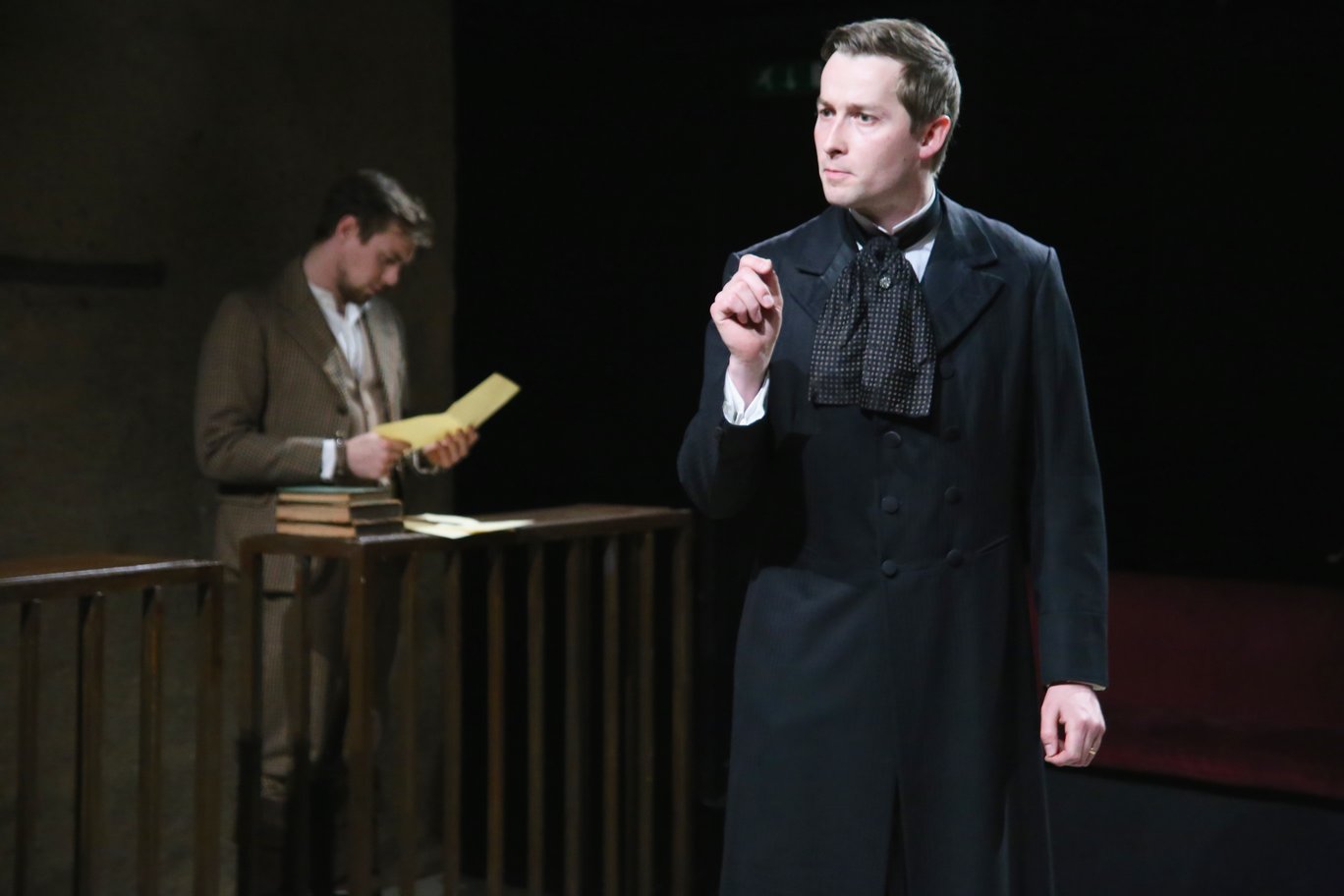 A fairly unremarkable production that feels too much like an educational show for schools at times and doesn’t deliver quite enough quality to justify its worth, despite its experienced and overall able cast.

The story of George Holyoake, the last Brit to be convicted and imprisoned for blasphemy, is one that certainly peaks interest, but sadly the average narrative doesn’t live up to the intrigue of the premise. One of John Osborne’s lesser known plays, A Subject of Scandal and Concern doesn’t leave its actors with much meat to sink their teeth into but rather consists of clunky and wordy sections and many underdeveloped characters. The result is a lot of slightly hammed up performances and an almost formulaic delivery of lines without much room for emotion or depth, the exception being Jamie Muscato as lead protagonist Holyoake who is incredibly watchable and does a good job of keeping the play moving. Naturally adding in the speech impediment that his character suffered with, Muscato juggles anger, frustration, passion and despair in his meaningful portrayal of a man with views before his time who is struggling to be accepted in society. He reacts well to his fellow actors and the way in which he conveys the conflicting feelings of Holyoake is both subtle and meaningful.

A voice-over narrative is used sporadically through the play which, while slightly corny, actually works well as a storytelling element and comes across very personal and close, admittedly helped by Doron Davidson’s eloquent tone of voice. With the exception of a couple of well-timed humorous lines from Edmund Digby-Jones, the rest of the ensemble do not really manage to demonstrate anything particularly memorable or of a high calibre in their performances, though as mentioned, this is not completely their fault given the limited source material they have at their disposal (Moroney is particularly underutilised as the only female character).

The play is fairly well-directed by Jimmy Walters who correctly grasps the tone of the play and seems to have an understanding of the book. The small space is cleverly used and scene changes are beautifully choreographed to make the transitions stylish and smart. The set is simple and effective: two benches and four wooden barred walls. The cast move them elegantly to Piers Sherwood-Roberts’ pleasant score, smartly creating a handful of different settings.

With a running length of just over an hour, this play just about did enough to keep me entertained and there were elements of the story that were genuinely interesting and engaging; however, the production was unfortunately little more than mediocre and given the reputation of the playwright and the experience of the cast, overall a disappointment.