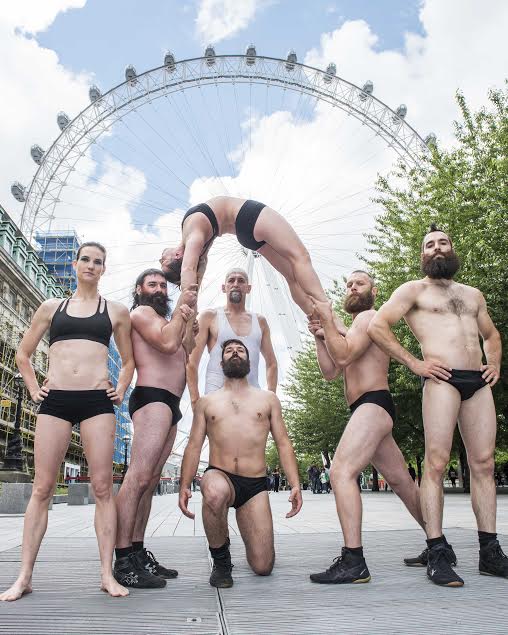 Barbu at the London Wonderground Festival

No one really goes to the circus anymore. It feels outdated. The acrobats, the animals and the amazement are a thing of the past. People prefer the theatre because they only think of circus in its original form dating back to the turn of the century. This is slowly in the process of changing thanks to groups such as Cirque Alphonse, who offer an exceptional evening at the London Wonderground festival at the Southbank Centre. Their show is called Barbu which means bearded in French. Indeed, every male performer has a rather large beard, which they all seem to take great pride in. Originally from Montreal, the goal of Cirque Alphonse is to present audiences with an evolution of circus, portraying its constant change in today’s day and age. With a wide variety of entertainment, there is truly never a dull moment in their show, wonderfully directed by Alain Francoeur.

The barriers of what is acceptable on stage do not exist in Barbu. Audiences should prepare themselves for laughter, whipped cream pies and nudity. Jaws will drop at the incredible balancing postures of the acrobats and everyone will chuckle at the old man of whom no one really knows his purpose on stage. They juggle with hats, the men climb on top of each other and there are times where the audience cannot believe what it is they are actually witnessing. Giving away more would be a tragedy; the fun of it is to be surprised and amazed. The performers don’t take themselves too seriously and are not afraid to show some weaknesses and play with them. This gives a lighter touch to the evening where it is clear that everyone wants to have a good time.

Unfortunately, there was a power outage during the performance. But in true French Canadian style, they did not let the 15-minute pause of their show get them down. The musicians brought their violins and their voices onto the stage and began singing traditional Québécois songs, getting the audience clapping and trying to sing along. Part of being an artist is to learn how to deal with the unexpected, and they did so beautifully.

The original music of Barbu adds a nice touch to the performance. Sticking to their French Canadian roots, there are traditional folk-sounding melodies in the show, but they are performed in a more upbeat manner suited for the stage. They add percussions or they remix the music and both are a nice way to remind the spectators throughout the show where the circus group is from. In an effort to bring a reminiscence of more traditional circus, they play melodies that we all think of when we think of the circus. After all, the goal is to portray the evolution of the circus in their way.

Until September 25th, expect beards, shots and amusement, all in a 75-minute period. Prepare to be amazed and entertained with Barbu’s circus. Go in with a pint, a sense of humor and expect the unexpected.