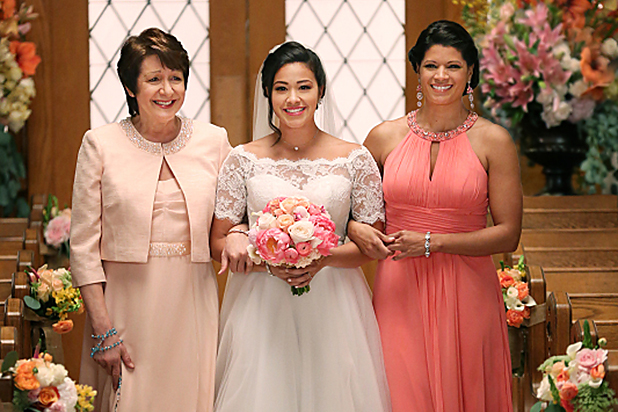 Season Wrap Up: Jane the Virgin

The worst time of year for me will always be Finale Season because all my shows are leaving me for at least four months. To make it worse, it coincides with summer, which most people enjoy, but without my shows, I run out of excuses to stay inside indefinitely.

Hitting me particularly hard this year is the finale of Jane the Virgin. Man, that show is a gut punch. It packs so much love, hilarity, tears, and twists into each episode that it feels like I’ve watched a whole season in an hour. Yet, after each episode I’m left wanting more. “Chapter Forty-Four” is the perfect example of how the show combines so much into one episode because in the last 3 minutes alone I went from pure joy, to fear, to sadness, to confusion, to shock. My Australian visa runs out around the same time Jane will be returning, which is going to make September a strange time for me.

Let’s start with the love category. Jane and Michael finally got married! This is wonderful news, but still also confusing because I love Rafael. But I also love Michael. I would actually be okay if the show decided on a polyandry storyline, and not at all surprised either. The wedding was magical and Rogelio of course stole the show by bringing his “third best friend” Bruno Mars up to sing. Better still was his dance with Jane. I have no idea when they would have had time to practise that, though – I mean, the girl was so busy she was late to her own wedding! Thankfully, Michael is a patient man, because we got to witness his love for Jane by saying his vows in Spanish. Gina Rodriguez and Brett Dier were especially amazing in this scene since there were no subtitles and I don’t speak Spanish so I have no idea what Michael was saying, but damn if I wasn’t chopping onions that whole scene.

The fear came later, when Jane was finally ready to not have her name be followed by “the Virgin.” As Michael and Jane were getting ready to do the deed, Jane wanted to slip into something sexier and Michael decided to get ice for the champagne bucket. When Michael ran into his partner in the hallway, he spouted a phrase that all Tuscaloosans are supposed to understand. When she looked confused, Michael realised who had been releasing information to the press. “You’re the mole,” he says, before getting shot through the heart (cue Bon Jovi, and sadness). From now on, I will be drinking warm champagne. Turns out, Susanna is not from Tuscaloosa, she’s from…wherever Rose is from. Because you know, she’s Rose (cue confusion, and shock. Told you it they all happened in a short amount of time).

Elsewhere in the episode, Rogelio and Xiomara couldn’t resolve their differences. As much as they want to be together, she doesn’t want kids and he still does. That’s going to get really confusing now that she’s pregnant with Rogelio’s nemesis Esteban’s baby.

And just in case you forgot this show was a telenovella, the ol’ twin switcheroo has finally happened. For weeks, Anezka has been practising her Petra accent and plotting something evil with her turning-into-a-pirate mother. In the most evil fashion, Anezka caused her sister to have a stroke, and now Petra now has locked in syndrome. But Petra looks like Anezka and Anezka looks like Petra and Anezka (who is pretending to be Petra) seduces Rafael while Petra (who everyone thinks is Anezka) lies trapped in a hospital bed, unable to speak, but completely aware of the situation. Cue confusion and shock, again. They seem to follow each other quite often on this show.

I think the biggest shock remains, that through two years of babies and secret sex, Jane still remains a virgin.