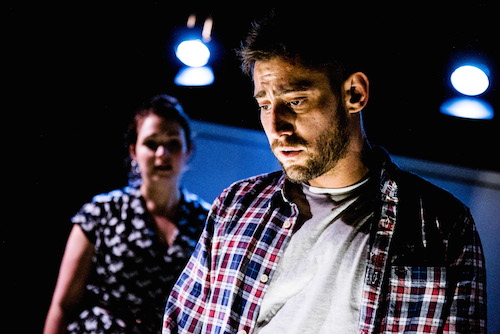 This Is Living at Trafalgar Studios

Not without both touching and humorous moments and boasting a wonderfully talented pair of actors, This Is Living is a largely flawed piece that relies too heavily on a thin plot line and certainly does enough to entertain but doesn’t leave you with much to reflect on, and is far less groundbreaking or thought-provoking than it perhaps would like to be.

The main narrative sees our two leads Alice and Michael in a field, Alice soaking wet and Michael particularly perturbed. It becomes clear very early on that Alice had in fact died days before this encounter but this is clear as day to the sceptical but soon accepting Michael. The play continuously flashes back to various moments in the young couple’s relatively short relationship leading up to the present day and eventually Alice’s funeral. Themes of love and loss are explored with its protagonists fairly typical relationship at the centrepoint.

Writer-director Liam Borrett’s concept isn’t particularly original and I struggled to really engage or believe in the ‘after death’ scenes which should be the driving moments of the play. The idea of appearing to communicate with a loved one after death isn’t a new idea and has worked at varying levels in the past, and while through character development these scenes become more interesting and you begin to empathise with both Alice and Michael, there is far too much filler and unrealistic exchanges for the piece to really triumph. In contrast, the scenes where we flash back to earlier stages in their relationship are a breath of fresh air. The chemistry between the actors is wonderful as they play out their awkward first meeting, discuss their future, and plan for a child. This more generic part of the story proves Borrett’s ability as a writer, with some lovely natural dialogue and endearing moments. Some sections are wonderfully crafted, the penultimate scene in particular utterly heart wrenching, and arguably should be the final moment of the show.

Michael Socha and Tamla Kari, probably more widely known for their TV and film work, are both incredibly able naturalistic actors. Socha in particular is a master of acting without speaking: some of the most tense moments are when there is silence and his ability to portray so much emotion at these times is remarkable. He manages to convey both joy and excitement in the earlier narrative while easily switching to despair and confusion in later life. Kari is much stronger in the lighter scenes, delivering multiple funny and sweet one-liners and demonstrating her quick wit and understanding of humour. She puts heaps of emotion into her performance when required and while occasionally this is slightly overwrought, in large her performance is solid and you easily empathise with her character. The pair are instantly believable as a couple, their conversations subtle and endearing, both working incredibly well together to make the piece real and relatable.

The staging, admittedly difficult in the small traverse Studio 2 at Trafalgar Studios, leaves parts of the audience blind to the action, with the actors facing opposite directions or being too low to the ground. While this isn’t always a problem, and indeed may well be a deliberate technique to help with the realism, it occasionally means key moments are missed—in my case a particularly long and heartbreaking monologue from Kari. The set is simplistic—a small platform slightly flooded with water (a seemingly popular element of many modern plays these days) and is all that the play needs given the constantly changing locations and focus on character interaction. Lighting is used well to contrast the different scenes and music cleverly heightens the drama and on occasions creates unease.

There is enough in Borrett’s first play to enjoy and intrigue but it doesn’t nearly do enough to captivate or excite. Its actors keep the story going and are the real drivers of the production. A lot of effort has clearly gone into this show and while it certainly isn’t a poor production, I was hoping for a lot more.