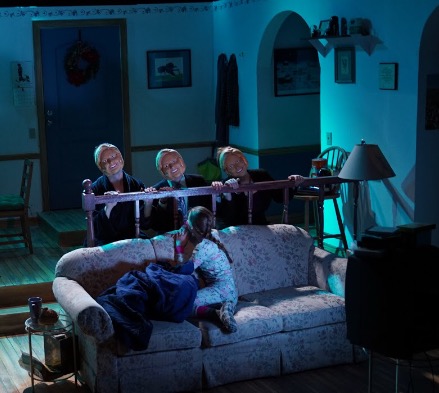 In an election year that has redefined crazy, at least the stage provides some refuge from politics. Well, at least until I found out I was seeing Primary. Et tu, theater? Et tu?

Primary, written by Gracie Gardner and directed by Alex Keegan, won the annual Project Playwright Competition, where scenes from a handful of plays are presented and, at the end of the night, the audience votes which script wins a fully-produced premiere in New York City as a part of the Sanguine Theatre Company’s season.

Set in 1999, the play takes place in a middle-class household in suburban Connecticut. The set is wonderfully normcore nostalgic. The couch is a dingy floral, the television is deeper than it is wide, the phone’s only function is to make and receive calls, and a thick Yellow Pages droops over an end table, all while VHS tapes are strewn about. As audience members shuffled into the theater, they were greeted by 90s music that caused involuntary head bobbing. The cast of Full House or Friends could easily plop down on the couch and fit in nicely. Even before a word of dialogue is spoken, the audience is transported back (for those of us who lived through it, at least).

The play follows the decision of Laura Hollister (Jody Christopherson) to run for State Representative, encouraged by Nick (Brian Miskell), a bank teller and aspiring campaign manager. The campaign throws Laura’s family into chaos as her husband Arthur (Kevin Argus) and their 12-year old daughter Sophie (Casey Nadzam) are brought into the mix. Arthur is particularly reluctant to get involved because he sees his wife’s chances as unlikely and worries about the financial burden of running against a more established politician.

Laura and Arthur had recently moved Sophie into a private school after their public school insisted on placing her in special education classes – though it’s never entirely clear why. Sophie is precocious, astute and sarcastic, and her biggest flaw seems to be her obsession with watching the anime series Sailor Moon. But if an overactive imagination that was heavily curated by campy 90s television makes one ill-equipped to be in public school classes, then I’m not really sure who is left to fill those seats.

Laura, it turns out, is primarily motivated to run for state representative change the public education system that failed her daughter. As the play progresses, she finds herself coaxed by Nick into taking positions that are more politically advantageous, and she loses sight of the original impetus for her political involvement.

The problem is that the play never lives up to its intended premise. The blurb states “Sophie is certain she’s the missing Sailor Scout, and she’s determined to fight the forces of evil.” Except for some scenes where Sophie is on the couch watching episodes of Sailor Moon on an obscured television screen, there is little to believe that Sophie fancies herself a missing Sailor Scout in her day to day life. Sophie is more focused on selling wrapping paper for her school’s fundraiser. Her connection to Sailor Moon is tenuous. And, more noticeably, all four characters spend most of their time in the living room discussing campaign strategies.

When it comes down to it, the story is really about Laura’s relationship with her family, and the play has little to do with Sophie’s pursuit of being a Sailor Scout. It is through the lens of Laura’s experience that she enters into the political fray and eventually retreats. Laura was forced to question her own values, deal with a husband who opposed her political involvement, stand up to a zealous campaign manager, and ultimately decide whether the financial and emotion strain on her family was worth sacrificing for her lofty political ambitions.

So it is especially odd that both acts of the play end with fantastical surrealist productions. The first half is a dream sequence involving macabre Hillary Clinton masks, and the second half is a creative anime tribute centered around powers suddenly bestowed on Sophie. The problem is not that these are not great endings. In many respects, they’re fantastic. The dream sequence is both terrifying and comical. The final sequence is beautifully choreographed with digital sound effects as Sophie transforms into a Sailor Scout. The problem is they are not the right ending to the 90-minute play that preceded them. They are exclamation points after a sentence that deserves a period. In short, the payoff was not earned.

The contrast between the political drama scenes and the surrealist scenes are jarringly schizophrenic. It’s unclear if Primary is trying to be House of Cards or Pokemon. With the two approaches fighting for dominance, the result is a reluctant compromise that weakens both visions. But to be fair, that may be the perfect embodiment of politics.