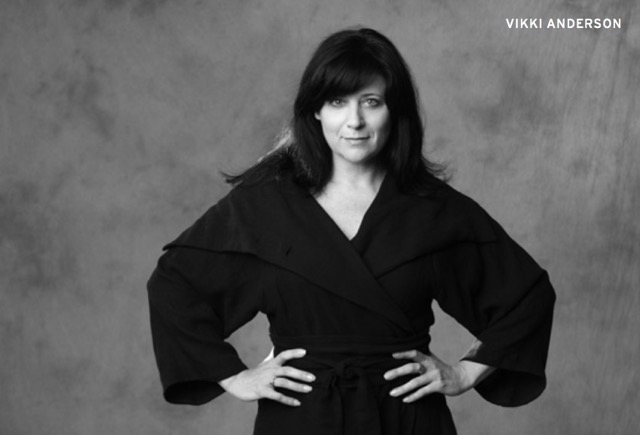 We’ve interviewed quite a few Shaw company members this year and we asked each of them about their favourite productions in the 2015 season. Helmed by Outstanding Direction nominee Vikki Anderson, Top Girls was one of the most-mentioned productions in this unofficial survey of people who know what they’re talking about. With an insightful frame and a light touch, Vikki tackled Caryl Churchill’s tonally ambitious text to great success.

Can you remember your first experience with theatre?
Grade five. I was a bit of a troublemaker in elementary school, too much energy, a little too much for my teachers to manage. My grade five teacher would let me go off to the library when I was done my work so I wouldn’t bother the other kids. I started reading plays and directed my first show. After that, on Friday afternoons, the teacher let me devise skits for the class. I’d spend my free time preparing the show and cart mountains of props and costumes to school. It was a turning point for me, after that I was always in the drama club, attending performing arts camp and knew I would work in the theatre when I grew up.

What first drew you to the directing?
I was never interested in performing; I always wanted to be a director. Building a world with a company of actors and designers is thrilling. Bringing people together to unlock text, character and tell a story is a beautiful challenge. When I went to theatre school to study directing, I also wanted to learn about design (at the time, Robert Wilson was a huge influence). It was a good path for me and helped form the kind of director I am today.

Although my design work is often abstract, there is a core understanding of the choreography required to tell the story in space. If you find the right geography for a play – pick the right map – the rest will follow through. Characters, and the actors that play them, instinctively enact choreography that supports their emotions and actions. A good design and open direction set up a world where that can happen with an integrated aesthetic and a purpose. When I first started out, I worked often as a freelance designer, eventually starting my own theatre company, DVxT, where I directed and designed all the productions.

How do you pick your projects? Do you choose them with a specific vision in mind?
I have no literary mandate. I love the classics, new plays and collective creation; basically anything that offers me a challenge. Sometimes I get to choose the project, sometimes it is offered to me. Generally, if I’m a little scared of the project, I know it’s a good thing, I know I’ll be forced to push myself. The work I’m most proud of are the plays that terrified me when I read them, like Sarah Kane’s 4:48 Psychosis.

When you first read Top Girls, what were some of the biggest things that jumped out at you? What were some of your first directorial concepts?
Well, it’s a little terrifying, so that was perfect. What jumped right out was the structure. The opening dinner scene, that seems disconnected from the other scenes, the non-linear timeline, the dialogue.

Early on, it was important for me to make the play relevant to a younger audience; to make these incredible women from the eighties and their story meaningful to the young women of today, the women that might be attending the show with their mothers and grandmothers. I knew anyone over the age of 40 would have their own connection to politics so I didn’t feel the need to preach to the choir. It freed me up to take the show in a completely different direction. I needed the audience to understand why this story still matters.

What was the biggest challenge in staging Caryl Churchill’s ambitious text?
I’d say it was the technical elements of the script. Technically, it’s a very challenging script for the company. All the characters are doubled, they play historical figures, the scenes are out of order in the timeline, the dialogue famously overlaps. We had a lot of research to do just to get started. As we moved through it, we found that everything needed time, consistency, repetition and that we had to just give over to the challenge. Slowly moments started to click and click, which is the beauty of working on Churchill.

Walk me through casting- was the play chosen with the actors in mind?
The Shaw Festival has the most incredible ensembles of actors in Canada, due to the vision of the Artistic Director Jackie Maxwell who is open to giving her company opportunities to push themselves. Jackie and I worked closely casting the core group of women who were going to work on Top Girls. This play, specifically, is a gem for the Shaw. There are so many remarkable women in the company, most of whom never to get to work together like this, so I was fortunate to end up with a company of thoroughbreds, as I liked to call them.

What’s your rehearsal process like?
My rehearsal process is what you’d call organic. I feel my main duty is to create an open space where the actors can feel safe and take risks. Rehearsals include movement work, drawing, making charts, lots of research, letting the actors build their own world (right down to the set piece positions), incorporating improvisation and specifically for this show, 80’s dance parties to get us going. We spent weeks in constant exploration, never setting specific blocking (movement) until we were ready to add the technical elements, lights and sound. I think that if I’ve done my job well, I should spend most of my time editing and shaping all the ideas that the company is able to bring to the rehearsal hall. It’s my main task to make sure they are inspired to do that.

You used a frame device that showed the actors getting ready before the show began. How did that idea develop?
The women have to play multiple roles in Top Girls, historical and modern, and it got me thinking about all the roles we play as women in the world. And all the preparation we have to undertake to play these roles. The idea of a dressing room, a boudoir, comes from the French verb bouder, to sulk. The boudoir appeared in the 18th century as a small private sitting room off a woman’s bedroom where she could be alone or entertain, in private. But you can’t escape the negative connotation of the term – a room for sulking and pouting, a room for clichéd female behaviour. As a device for the show, we reclaimed the boudoir as an intimate space where the woman found companionship and the courage to prepare for the roles they would [play] onstage.

There is a big difference between the public and private sphere of a woman. Alone in her boudoir, she can be herself. But step into the public arena and the rules of engagement are still as clear now as they were centuries ago: control your emotions and adorn your body if you want to be accepted. I wanted to remind the audience that women play multiple roles each day, but we seldom acknowledge the routine of preparing for these parts we play. I wanted to draw a connection between the world of corsets and long skirts of the past, and the extreme grooming and plastic surgery of today. This became a central political idea for the play; that things really hadn’t changed.

So, we put the dressing room onstage and allowed the audience to watch the women prepare before each scene. Their dressing room tables transformed into all the other furniture required for the performance and the women opening set the stage for each new scene. Once the designer and I landed on this meta-theatrical idea, everything fell into place for us.

Did you have a favourite moment in Top Girls?
Well, I can’t really pick a favourite moment, that’s like asking which kid you love most. But every night, when the women would come out and start the prelude, getting dressed with the houselights still on and the eighties dance music blaring, I loved watching the audience sing along and become enraptured in the simple act of watching the women be women. It always brought a smile to my face.

Do you have a dream project you’ve always wanted to direct?
Oh, a few dozen! But I’m especially keen on working on The Cherry Orchard some day.

What are you up to now/next?
I’m the Artistic Director of Theatrefront, in Toronto, and we are developing three new plays at the moment. So I’ve been in and out of workshops, working with playwrights and preparing for upcoming productions of the work all season.