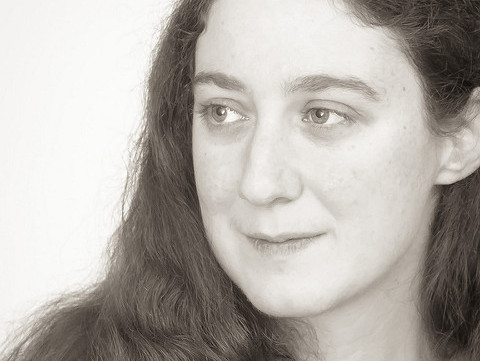 Coriana Hunt Swartz is nominated for her Outstanding Costume Design for Flat Earth Theatre’s Terra Nova. A stalwart of the company since 2008, she brought her historical costuming expertise to the table for an expedition to the South Pole. We talked about helping audiences make subconscious connections, how to make convincing fur boots, and the perks of actors owning usable costume pieces.

You make sure actors don’t go on stage naked, and for that, the theater community thanks you. What drew you to costume design?
Oh man, is that a long and convoluted road! I’ve had an interest-bordering-on-obsession with historical fashion since I was a wee one (I had the dressmaking chapters of the later Little House books more or less memorized by the time I was eight), but didn’t translate that interest into theatrical practicalities until midway through college – I was an actress in high school. I gave up theatre for a little while, for complicated reasons. I needed to go back to theatre, but couldn’t go back to acting immediately, again for complicated reasons; a friend was designing a youth production of Grease and brought me on as her assistant. For the next few years I basically learned as much as I could, as fast as I could, took on as many projects as people would let me, and faked it till I made it – till I started to actually know what I was doing.

Are there particular shows/time-periods/styles that have more aesthetic appeal for you?
Ahahahaha. See that bit about the dressmaking chapters of the Little House books above. I can do 1883/84 with my eyes closed. I’m happiest between about 1874 and about 1890; outside of that I’m pretty comfortable from about 1802 to 1910ish; anything outside THAT requires really serious research. And I’d rather do it pre-1800 than post-1910. I have no idea how to handle the 20th century (never have; I skipped it, I went right from the 19th to the 21st).Terra Nova was a challenge, being just barely at the edge of my comfort zone – everything felt familiar, but I was constantly having to go back and check on the details. Probably my favorite show I’ve done, design-wise, was Blood Relations in 2009, which was about Lizzie Borden – 1892 New England, with some of the principal characters’ clothing quirks documented in Grand Jury testimony, and I got to build a lot of the dresses from scratch.

How do you determine designs for a particular show?
I like to talk in depth with the director very early on, about their vision and interpretation of the show and the arc of each character. I want the visual experience of a show to reflect the character journeys as understood by the director and the actors, for the external to evoke the internal. Simultaneously, I’m always researching history and cultural context of the show, in a more broad-ranging way if it’s an entirely fictional story, and very, very minutely and precisely if it’s a historically based play (which is something we do a lot of at Flat Earth). For Terra Nova, obviously, I read a great deal about the Scott expedition and the technology of polar exploration – I learned all about the history of waterproofing fabrics, which was a huge technological advance manufacturers were struggling with at the time! – and for Blood Relations I read case studies of the murders and looked at a lot of crime scene photos from 1892. (Yes, I will take any opportunity to bring up my knowledge of Lizzie Borden’s wardrobe. Girl was really into the color blue.) Then I try to sketch out designs that merge the historical research and the conceptual understanding – color schemes that emphasize relationships between characters, historically-accurate degrees of formality or informality of dress that reinforce how the character’s social role is evolving, costume pieces that are paralleled or passed between characters in relation to what is going on between them in the story. I know a lot of those details will be missed by most audience members, but I want the costuming narrative to support the audience in making the subconscious connections that will deepen their understanding of the central questions of the show. (Also I really hate it when costume design reinforces popular-but-incorrect assumptions about the past, so I avoid ahistorical easy-answer costuming decisions LIKE THE PLAGUE.)

Terra Nova took us from the icy South Pole to the elegance of early 20th century London. What were your guiding principles in designing the costumes for this show?
Jake and I sat down, in November, before we had a cast and before it started snowing, and talked about how the entire play kind of takes place in Captain Robert Falcon Scott’s head. He’s the only REALLY real person in it. The other four members of the expedition are there with him, in the Antarctic, so they have to be more or less real, but his wife Kathleen is a memory, and Amundsen, his rival, is a mirage, or a dream – very little to do with the real Roald Amundsen, himself; much more to do with personifying Scott’s fears. So the five members of the expedition were scrupulously researched and as as accurate as I could make them, given budget constraints – I made the parkas from scratch based on expedition photos, I cut up donated fur coats to make boots and mittens, we had volunteers knitting scarves – but Amundsen appeared in a highly decorated, quasi-fantastical military jacket, incredibly impractical for polar exploration but imposing and evocative of Scott’s imagining of a man who could (and did) out-manuvuer, out-strategize, and ultimately out-do him.

With Kathleen Scott, on the other hand, I wanted to convey both a sense of home and a sense of loss, as Scott’s memory-interactions with her were tinged with his growing awareness that he was going to die; that he would never see her again. I put her in half-mourning colors – purples and greys – and tried to steer away from the formality and fashion-consciousness of much Edwardian theatrical costume design, in favor of softer lines and more intimate clothing choices. And here I must give a shout-out to Kamela Dolinova, who wound up providing a significant number of costume pieces out of her own closet, in line with my design guidelines, when I ran out of time to make all the dresses I had planned for her. She tolerated my nitpickiness admirably, and was an absolute godsend.

And then there’s the dinner party scene at the pole, which is total hallucination. While I did research the formal menswear fashions of the year, I ultimately had to settle for what I could affordably source, which was modern tailcoats, not Edwardian ones. Really, you could say the guiding design principle for thisshow was cutting back on the ideals due to time and budgetary constraints!

I saw you onstage in the Independent Drama Society’s production of Eurydice in 2011, and have seen you many times since, in person and on paper, in the vestibules and programs of several productions. What do you particularly love about working with Flat Earth?
Yeah, I guess I show up in a lot of places! I do love going out and working with other companies from time to time, making new friends and learning different ways of doing things, but Flat Earth is my home. I moved here in 2008 to join the company (having distance-designed FET’s No Exit while living in Western Mass). We’re really like no other theatre company out there – aside from the intellectually and artistically challenging nature of the productions themselves (and I do love a challenge), our commitment to non-hierarchical company structure and consensus-based decision making makes every monthly meeting an adventure in collaboration. Working with Flat Earth pushes me to grow as a person, as well as as an artist, and I feel like I’ve learned more about listening, about respect and making space to acknowledge and validate different perspectives, from this long-term process of collaboration within Flat Earth, than from the whole rest of my life. I like to use the metaphor of “coming back to the table” for the Earthlings’ collective determination to working through and resolving our disagreements and differences of opinion, and it’s the familiar faces around that table that make it all worthwhile.

What’s next for Coriana Hunt Swartz?
I’m really pushing myself on the creative social media/audience engagement front this year. I’m in the midst – though sadly approaching the end – of a huge tie-in blog project for Flat Earth’s Tales of a Fourth Grade Lesbo, in which I collected and curated childhood memory stories from LGBTQ members of the Boston theatre community. And I’m plotting out a perhaps even bigger – though very different – social media project for Blinders, our upcoming Patrick Gabridge political satire (it can’t be that hard to run a presidential campaign, right?). I’m not sure when I’ll do another costume design project – I’m getting a little itchy to make something, but I’m pretty busy with the online projects right now. We’ll see. Maybe I’ll (finally) make a bustle dress for myself this spring. Maybe someone will call me with an emergency in 18th century menswear (probably a different emergency, actually, that one was a few months ago). Anything could happen!