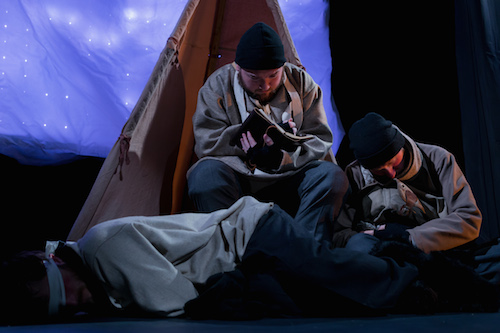 I thought I was being clever when, as I tripped and scraped and picked my way over the frozen tundra that used to be the sidewalk along Arsenal Street, I said to myself: “I’ll begin the review with some joke comparing the show to the Snowmaggedon that has plagued Boston this month.” After stepping out of Terra Nova, I appreciated how truly silly the comparison was. In our age of hyperbole, we like to think we are literal: literally “freezing”, literally being “killed” by our shoes, literally “dying” for food or drink. We so rarely face being tested, being pushed to our limits, experiencing extremes of environment and humanity that bring out our noblest and basest instincts. Terra Nova reminded me of those few people who are literally tested, literally brought to the brink.

This is not just the best Flat Earth Theatre show I’ve ever seen: this is one of the best fringe productions I have ever attended, ever. Full stop. I was unequivocally impressed by the amount of preparation that went into this show: the staging and performing of this rich text was fantastic, and I highly encourage you to rearrange your weekend plans and see it before it closes February 28th.

Written by Ted Tally and directed by Jake Scaltreto, Terra Nova recounts an ill-fated expedition to Antarctica. Captain Robert Falcon Scott (Chris Chiampa) claims he will win glory for England by leading a handful of men on a march to the South Pole. He claims to be above the methods of the uncivilized Norwegian rivals, men led by the enigmatic Roald Amundsen (Samuel Frank); while the Norwegians will depend on the strength and meat of sled dogs, Captain Scott insists the Englishmen will walk to their destination and back. The result may be predictable, but the execution is anything but. Of course this play is full of talk of man’s hubris in the face of implacable nature, and of the foolhardiness of excessive patriotism. But I didn’t expect this play to probe so deeply into the nature and fragility of masculinity, into the agonizing awareness of mortality, into the richly complicated forms love between a man and a wife can take.

This is the second show I’ve seen that converted the Arsenal Center Black Box Theatre into an icy and hostile environment. New Rep’s excellent Tongue of a Bird gave us the Adirondacks; now Flat Earth presents the Antarctic impressionistically. A few pale slim banners hung vertically to the left and right of the stage, and one large square and slightly rumpled sheet dominated the backdrop (scenic design by Niki DeSimini). The whistle of a harsh Antarctic wind quietly but constantly permeated the space (sound design by Brad Smith). While this may have been convincing enough, different scenes were enhanced by a beautiful array of pinpointed lights shining behind the large middle cloth (impressive lighting design by Chris Bocchiaro). The result was a sleek but powerful suggestion of environmental shifts.

This play manages to capture a historic authenticity without depending on antique props or a hyperrealistic set. A huge factor in this achievement is the impressive vocal work of the actors. Normally, a cast of seven people affecting English accents would be enough to make me bolt for the door. But each actor conveyed a convincing and distinct regional accent that credibly placed the action of the play, rather than distracting from the text (I kept searching for a vocal coach credit in the program, and was shocked to see none). Beyond accents, I was impressed by the vocal prowess and diction of several performers, particularly of Frank: Amundsen often effectively morphed into various filler characters (a British society presenter, a French waiter, etc.), figments of Captain Scott’s feverish imagination.

Each character stood out in this intimate performance. Matt Arnold may have been the most colorful character as the cheerful, scrawny Bowers, never wanting for wit; Kevin Kordis, as the burly soldier Oates, was as stalwart, brave, and menacing as a hot-tempered ox; James Hayward, as Wilson, the crew’s doctor, provided steadiness and a cool head useful for checking the passions of his crew mates; and Robin Gabrielli, as the courageous but slightly dim Evans, was touching in his pure desire to support his captain and his team, with disastrous results. Amongst this boys’ club, Kamela Dolinova holds her own as Kathleen, Captain Scott’s independent and cultured wife, abandoned back home in England but not forgotten. Her presence throughout highlights the Captain’s wavering state of mind, as he longs for a home he nonetheless was all too eager to leave for the icy South Pole. Dolinova’s final speech deserves highest marks for being full of quiet grief that never decayed into cloying, weepy melodrama.

But Chiampa is the clear star of this show. His Captain Scott is as emotionally close to the projected image of his rival Amundsen as he is to the memory of his absent wife. He grapples with an uncomfortable awareness of the British expedition’s rashness; he battles with rising guilt and an inability to make hard choices at the right time. As his rival puts it at one point, he is the “most dangerous kind of decent man”: one who doesn’t know himself. And in the merciless depths of the bottom of the Earth, such ignorance proves fatal.

Well-acted, well-staged, marvelously well-costumed (design by Coriana Hunt Swartz), I don’t know how to make a stronger case for this performance. Don’t miss this opportunity to witness man at his finest and at his lowest; watch him come to terms with the desire to overcome one’s self, and how it often proves one’s most miserable downfall.

Flat Earth Theatre’s production of Terra Nova is playing now through February 28th, 2015, at the Arsenal Center for the Arts Black Box Theatre.