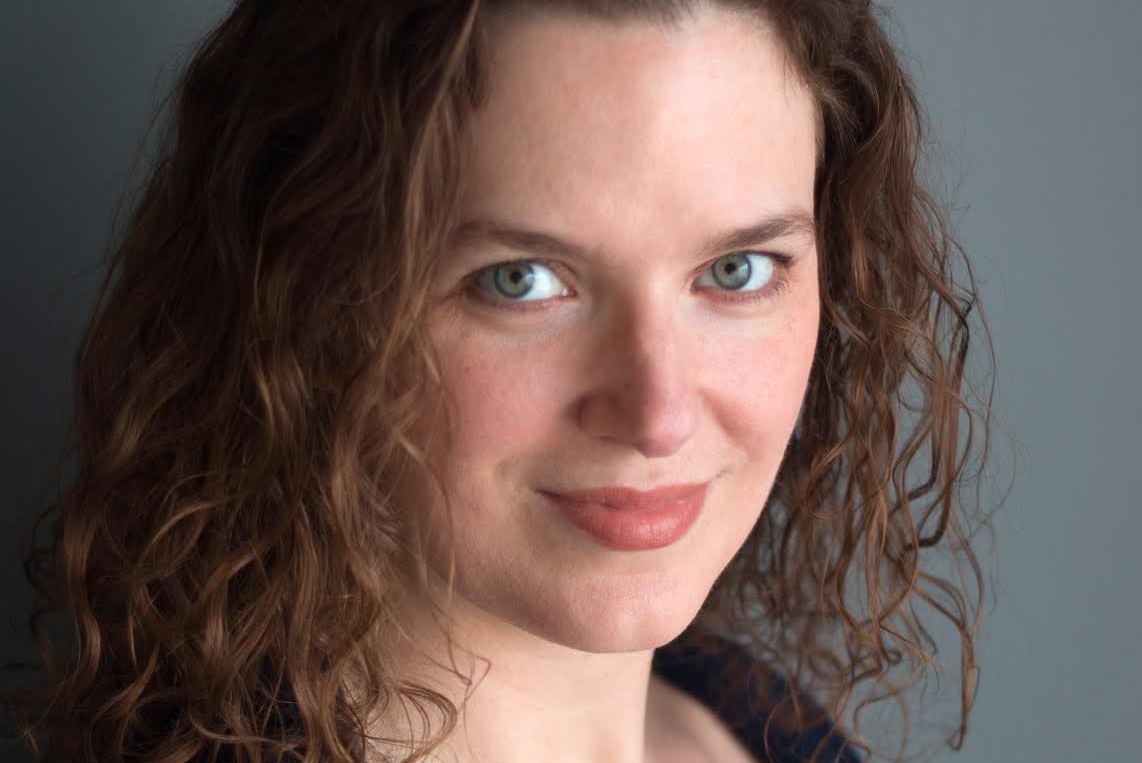 Kamela Dolinova is nominated for her role as Kathleen Scott in Flat Earth Theatre’s Terra Nova. The wife of Captain Robert Falcon Scott is not your run-of-the-mill weeping Penelope figure; this intelligent and independent woman is an equal partner in her formidable marriage, and discerns some of Captain Scott’s most self-destructive motivations. We chatted about the challenges fringe companies face, and playing “Englishness.”

What drew you to work in the theatre?
I was a painfully shy and quiet child, and did a lot more writing than performing up until middle school, when I started singing in chorus. After doing a couple of solos, I tried out for the school musical when I was a freshman in high school, and got cast in the chorus. I remember being very proud that I wasn’t just in the chorus, though – I was in a slightly more elite ensemble that sang some of the more difficult music in a smaller group. The show was Oklahoma!, and I was credited as a “Prairie Miss.” Seriously. After that it wasn’t long before I was president of the drama club and majoring in theatre in college. I’ve stayed with it since then in one way or another. I think of it as a disease, really, but very treatable. You just have to keep doing it. Oh wait…

The first show I saw you in was in Flat Earth’s daring What Once We Felt, where you played one half of a couple trying to find happiness in a dystopian, all-female-populated future. What elements draw you to audition for a particular role, or a particular show?
What Once We Felt is a show I still think about a lot. I was drawn to it in part because it was an all-female cast, with no male characters, and I wanted to see what that looked like. Being a six foot tall and imposing-looking person, I end up playing men rather a lot. (Interestingly, in this show, the character you mention is playing the traditional male gender role in that couple.) But I was very excited and honored to end up in the company of these women in this particular cast, which was towering – just an incredible group of women. That show really stretched me, and the intimacy and trust that was generated in that rehearsal hall was like nothing I’ve ever experienced. I don’t spend a lot of time in women-only spaces, and the camaraderie that can develop is quite stunning. I experienced the same thing later with Maiden Phoenix’s The Winter’s Tale. Both times, the mutual support and collaborative attitude toward the work in those casts were amazing. Maybe I should actually answer your question. Mostly, what it takes for me to audition is simple: it needs to be a play that excites me, and be put on by people whose work I admire.

You are currently nominated for another role in a Flat Earth Theatre show. What do you enjoy about working with this particular theatre company?
Speaking of people whose work I admire! Flat Earth Theatre has impressed me as a company since I saw their As Bees in Honey Drown back in…2010, it looks like. I could tell that this was a company that was serious and committed to what it was doing, and that each member gave everything they had – which was a lot! – to make these little-theatre productions as big as possible. When I finally did What Once We Felt in 2014, I found that the company is as professional as it gets. Small and community theatre often suffers from a lot of difficulties – low staff, no money, getting things done at the last minute if at all, tempers flaring and people falling off the map. Flat Earth always felt like working for people who just get it done, and make the experience as smooth as possible for everyone.

You are nominated for your role in Terra Nova as Kathleen Scott, the wife of Captain Robert Falcon Scott. You brought so much emotional power to the role while eschewing loud demonstrations of pride, love, or grief. What was it like working on that stellar production?
You are killing me. Thank you – I had a great time doing it, and it was a fun balance, figuring out what this woman might have been like: an upper class Edwardian socialite, an artist, a fiercely independent woman but wanting a child more than anything else. She doted on Scott – her letters show this – but every person reaching his or her full potential was more important to her than even his life. I had to figure out how such a person would be in pride and love and grief. Also in Englishness.

Working on that show was a little odd, honestly, because I was not only the only woman in the cast, I almost never interacted with the majority of the rest of the cast! Kathleen is written to have a few monologues, and a few scenes with Scott, largely in flashbacks. (At one point I use another actor as a prop to represent my son, but that’s about it.) So the work we did developed largely separately from the ensemble work of the rest of the cast. Getting to observe it developing, though, and seeing how I fit into the picture, was a real privilege; it was indeed a stellar group. Backstage, the person I was probably tightest with was Sam Frank, who played Amundsen. He was the other person who existed outside the rest of the ensemble, orbiting in and out to torment Scott but invisible to everyone else. “Stellar” really applies here in another sense, I think: Scott and his men are the inner planets of the show, and Amundsen and Kath swing around once in a while on wacky orbits, kind of like Pluto.

You act, you direct, you write, and you heal. As well as a performance artist, you are a Certified Rubenfeld Synergist, which involves taking a holistic approach (considering mind, body, and soul) to counsel people. How do your artistic methods of expression inform your healing practices, and vice versa?
I like to say that while I majored in theatre in college, nothing has informed my acting and directing as much as studying Rubenfeld Synergy. Getting a deeper understanding of the way the body holds, moves, and expresses emotion and the story of a person has been instrumental both in finding characters for myself, and for helping other actors find deeper expressions of their characters. In the other direction, I often find myself doing things that are a lot like acting exercises with clients – encouraging them to experiment with different ways of breathing, sitting, standing, moving, and seeing what those possibilities bring to them. Being an actor also helps when giving workshops and presentations – way less scary.

What hopes/goals do you have for the future of Boston’s theater community? What kind of work would you like to see more of?
I just got to see all three parts of A Southern Victory at Vagabond Theatre, and it was the most exciting, ambitious work I’d seen in a long time. I would love to see Boston theatre take more risks like that. I feel like most of the “daring” work that’s being done in Boston theatre these days is about immersion, or “edginess,” and it can feel artificial or showy. I want more theatre in Boston that asks big questions, and explores them through characters that move me.

What’s next for Kamela Dolinova?
I’ve been on a bit of a hiatus for a few months, writing and working on independent projects, but there are a few possibilities in the pipeline. A visual artist friend and I are currently working on animated storyboards for some of the songs from a musical I was in for a number of years called 2010: Our Hideous Future: The Musical! I’m kind of hoping to make a movie, which seems crazy ambitious, but nobody ever said I wasn’t crazy.