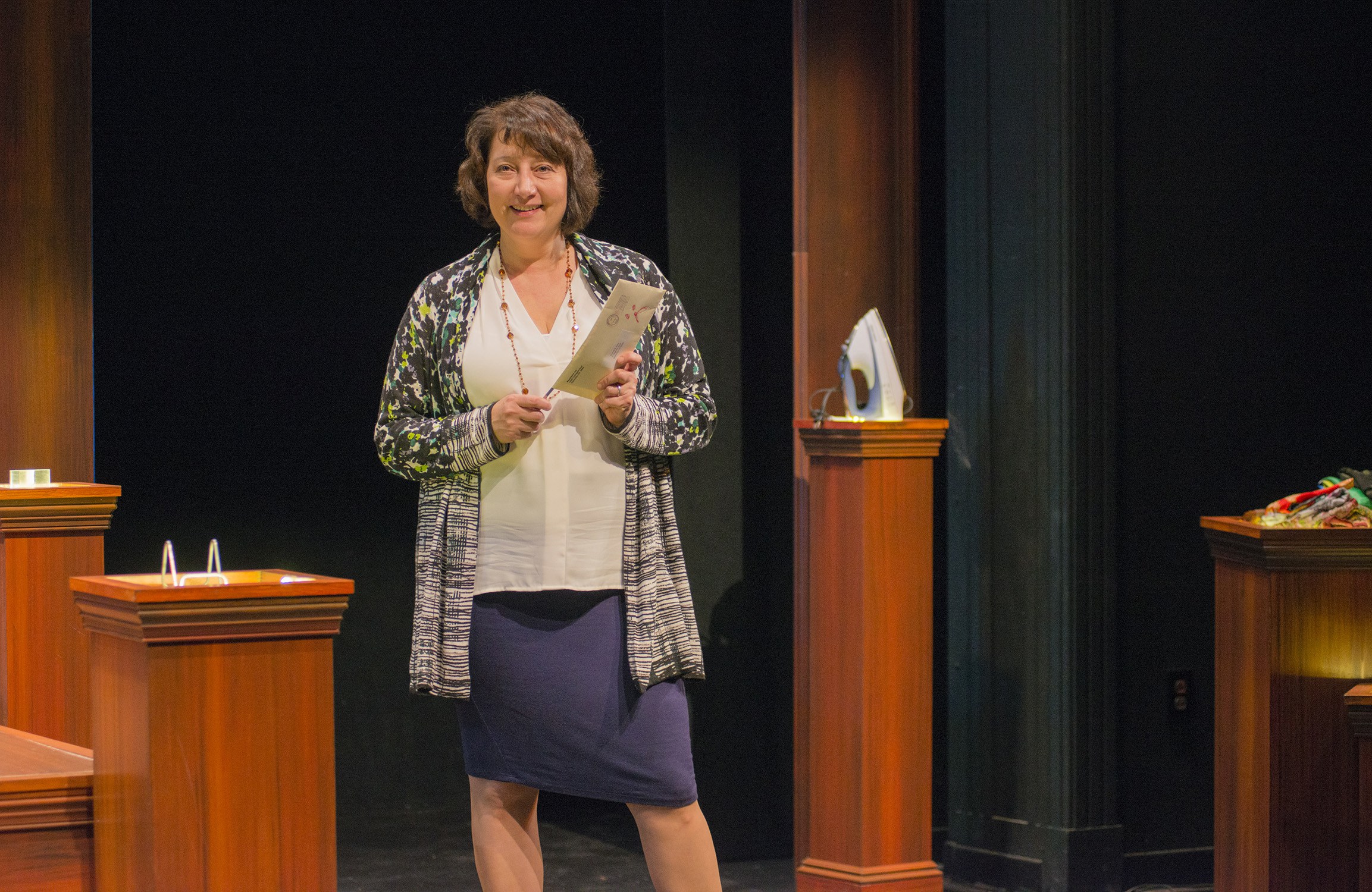 A woman stands in front of us, a smile “made of granite” plastered on her face, and she tells us her mother is “living with,” not suffering from, Alzheimer’s disease and the related dementia. If this were a real-world encounter, if we were not blessed with the anonymity of sitting in an audience, we all know how we would adjust ourselves accordingly. We would try to make our facial expression and body language seem sympathetic and warm without being condescending, seem understanding without revealing the panic that may flicker underneath our compassion. Because although more than five million people in this country live with Alzheimer’s, although it is a disease that is permeating the lives of more and more people every year, the prospect of suffering from it, of one of our loved ones suffering from it, still chills us to the bone.

Vivienne (Adrianne Krstansky) is well-aware of what is running through our heads, but that does not stop her from confiding in us. Over the course of about 80 minutes, we are shown what it is like for Vivienne, middle-aged woman, baker, proud small-business owner, to be the primary caregiver of her mother, former-baker and still loving parent, Rosemary Davis. And it is the blazing honesty with which Krstansky conveys all the humor and pain in the story of Blackberry Winter that makes you glad you ventured out to the Arsenal Center for the Arts in the first place.

Written by Steve Yockey, this play is fiercely funny, and as directed by Bridget Kathleen O’Leary, the production navigates confidently over both the poignant and banal challenges Vivienne and her family must face. When the weight of responsibility and the absurdity of her mother’s disintegration become too much to bear, Vivienne thinks of the fable-like “creation myth” she has dreamt up to try to wring meaning from the opaque reality of her mother’s disease. She imagines a story in which two woodland creatures, a White Egret (Paula Langton) and a Gray Mole (Ken Cheeseman), set off a series of events that will permanently affect the lives of those who live in a beautiful, imaginary forrest.

The production’s set echoes Vivienne’s attempts to try to piece together a coherent narrative (design by Matthew T. Lazure). She is surrounded by various pedestals of handsome, polished wood, with lights that shine on and from atop them (lighting design by Christopher Brusberg). Each pedestal holds a single item, such as a letter opener, or a piggy bank. It is as if we are in some gloriously simple museum, a space in which Vivienne can keep every memory, every trigger, every threat, every potential land mine separate, neutralized, managed, readily accessible and quietly exalted.

The “forrest” is projected onto a large screen behind the set, enacted with brightly painted, two-dimensional puppets (design by Lazure). The whimsy of the fable, told by Langton and Cheeseman in convoluted verse, avoids being treacly because it is so desperately needed, so nakedly clutched at, and so self-depracatingly joked about by Vivienne herself. The fable helps break up Vivienne’s monologue when the facts of Rosemary’s condition become too difficult to contemplate.

But Krstansky’s incandescent performance is what fuels Blackberry Winter. As she portrays Vivienne’s stream of consciousness, her zig-zags from sarcasm to self-criticism to resentment to self-aware disintegration, Krstansky is in complete control. She easily emphasizes the wit in Yockey’s play, and she just as easily brings us to tears as she portrays the agonizing temptation to give up. Krstansky, O’Leary, and everyone in this production clearly understands the purpose of the fixed smiles, the adherence to manners, the need for the appearance of hospitality and medical professionalism in the face of personal tragedy: we use all of these tools to paper over our fear of decay, of death, of oblivion, of absolute loss.