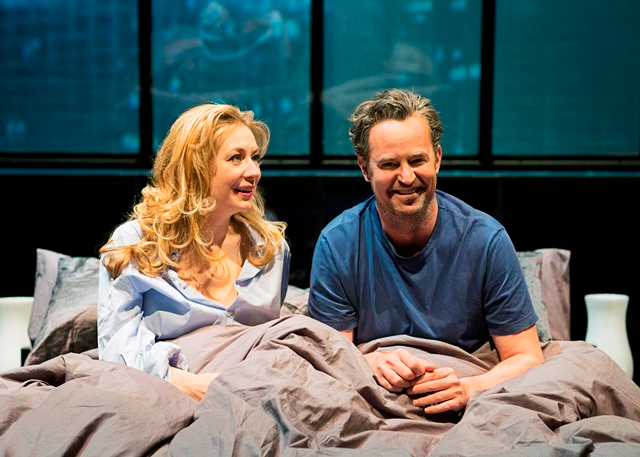 The End of Longing at the Playhouse Theatre

Matthew Perry is an actor that many of us are acutely aware of for his portrayal of the awkward, joke-spinning Chandler from the sitcom Friends. What people may not be aware of is that he is currently starring as the lead in a play of his own creation in the West End, presently at the Playhouse Theatre. The End of Longing is a play which delves into many of Perry’s well-documented troubles with alcoholism and addiction, working somewhat semi-autobiographically in its telling of characters nearing or within the middle of mid-life crises. In so doing, it touches on a number of issues, including relationships, loneliness and the nature of character flaws. Despite being infused with comedic strands throughout and a number of chuckle-inducing one-liners, it is unfortunate that The End of Longing is, however, not quite as deep as it thinks it is, with characters never really developing much beyond their one-dimensional beginnings. However, that is not to say that the play is not enjoyable if taken light-heartedly, even if that isn’t the playwright’s intention. Perry’s delivery is relatively solid, and his soliloquies seem almost self-therapeutic in their sincerity. This insight, bundled with some good humour and a steadily-paced script makes The End of Longing a relatively enjoyable, if kind of unremarkable play, with not just the diehard Chandler fans set to take something from Perry’s foray into the West End scene.

Plot-wise, The End of Longing follows four pre-middle-age characters living within the hustle and bustle of modern L.A.. Each has a distinctive characteristic that ultimately defines them, which they bizarrely announce right at the play’s inception. Jack (Matthew Perry) is an alcoholic. Stephanie (Jennifer Mudge) announces that she is a high-class prostitute. Stevie (Christina Cole) is a neurotic pharmaceutical worker who is a little too keen on her own free samples. Finally, Joseph (Lloyd Owen), rather simply, announces that he is just ‘stupid’. What follows is a plot focusing on the relationships between Jack and Steph and Joseph and Stevie, the former unable to function as a couple because of each other’s flaws and the latter successfully able to overcome them. Dialogue between the characters does have some rather funny one-liners and anecdotes, yet never really strays away from sitcom territory, as each character almost plays a caricature of that particular personality type. Jack is forever effing and jeffing in a loud, angry voice while Stevie speaks rapidly about her insecurities in a neurotic, tightly-wound manner. Joseph is thoroughly dull and not at all life-like in the slightest, blissfully agreeing with everything Stevie says and acting as the moral grounding for the play. The intention was probably to counter his normality with the zaniness of the others, perhaps making his ‘normality’ seem, in itself, something odd or peculiar. Instead, this only emphasises how detached from reality much of this play feels when compared with some of the real issues it aims to tackle. There is also a significant amount of lewdness within The End of Longing that, while funny at times, also feels quite forced and even kind of unnecessary. In all, the small cast does its best in working with the script, and the deliveries do have their moments, but sadly, the script fails to keep the plot coherent and interesting throughout its run-time.

Turning to production, the set is relatively simple and fits the Playhouse’s cosy ambience, with sets moving from bedroom to bar to bedroom again, further adding to the play’s overall feeling akin to a sitcom with a greater focus on the ‘sit’ part as opposed to the ‘com’. There are, however, far too many lengthy scene changes accompanied by an increasingly annoying interlude music which you’d hear in one of those late-night, too-loud bars where you can’t speak to one another—though perhaps that was the intention. Generally then, the production is largely satisfactory, though there is little innovation on show.

In sum, The End of Longing does not leave you longing for the end so much as understanding that it is coming and that you increasingly know its route and where it will ultimately end up. Perry’s play proves somewhat entertaining if not only for the interspersed one-liners and the performance of Perry himself, augmented by the wider context of his own struggles with addiction. It’s weak, edgeless and the thoroughly one-dimensional characters leave little to remark upon and limit the play’s significance beyond an avenue through which Perry can speak semi-directly to the audience of his own experiences. A new Friends episode this is not, despite it often feeling like an odd, heavy and much more adult version, having not quite the narrative and dramatic clout it often thinks it has. Though there is certainly some amusement and entertainment to be had in The End of Longing, it ultimately stands as an unremarkable venture into the cliché, punctuated only by peaks into the much more interesting back-story of its star.