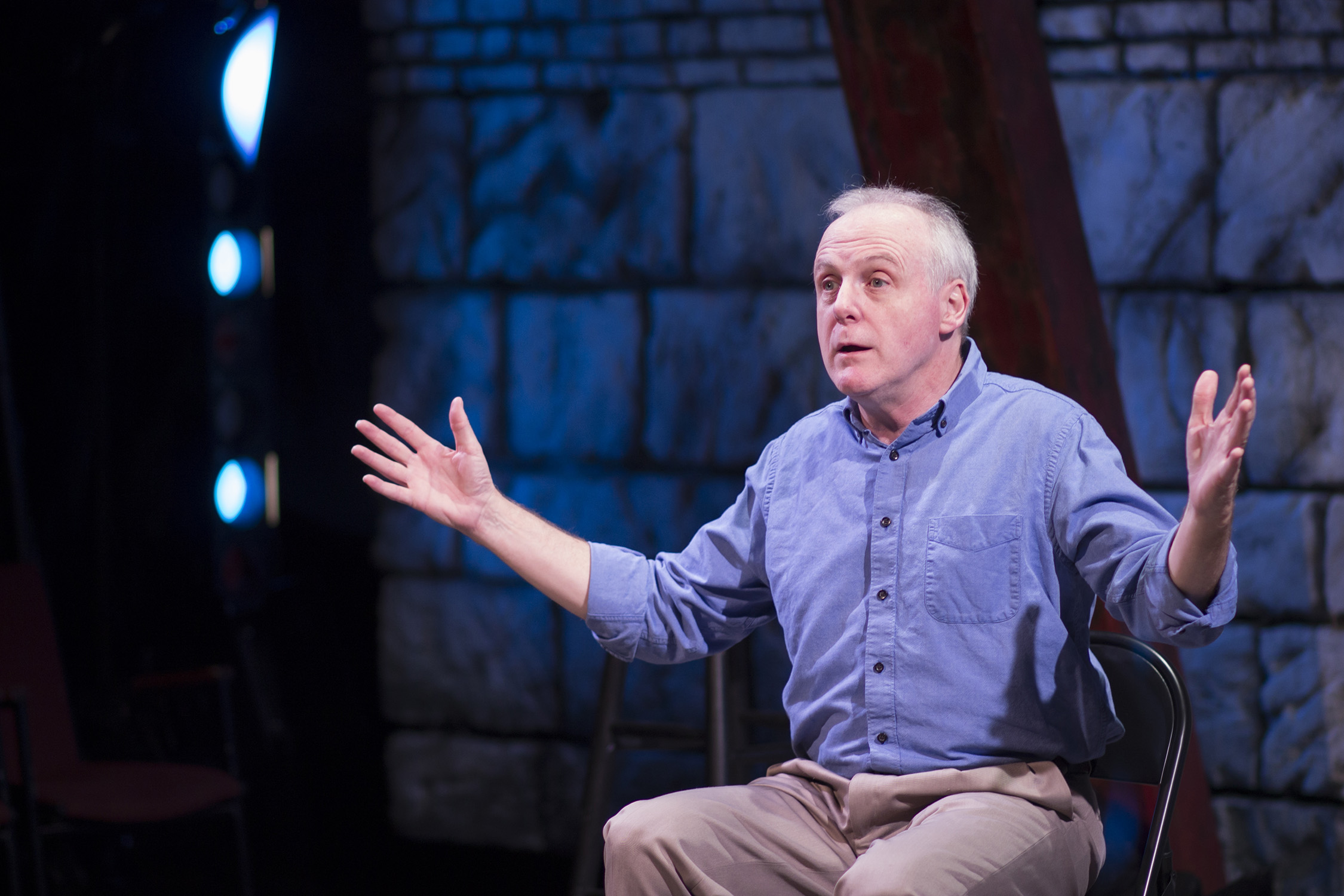 An Outsider in Troubled Places: Via Dolorosa

One of the unexpected pleasures of New Rep’s current season—exploring themes of “identity”—is the inclusion of several small-cast shows. Shrugging off the expense and complications of large casts and cluttered sets, we are left with a few talented individuals charged with making their story relevant enough to hold our attention. New Rep’s production of Via Dolorosa is a one-man show that has turned the Arsenal’s Black Box Theater into a portal to the Middle East.

Originally written and performed by British playwright David Hare, the play is Hare’s monologue about his visit to Israel and the Palestinian territories in 1997, when both playwright and the state of Israel turned fifty years old. Hare is the empathetic mouthpiece for religious Zionist right-wingers and Arabic artists, distinctly cool Tel Avivians and Palestinian politicians. He tempers his wit with humility and sharpens his sympathy with a relentless curiosity and thirst for the truth, and over ninety minutes the audience witnesses his journey through the war-torn “Holy Land,” uncertain of whether hope or despair will prevail.

David Bryan Jackson brings a seasoned sensibility to the performance. Well-acquainted with the role, he astutely points out in the program notes that the play’s questioning feels intensified rather than dated almost twenty years later. Add the aftershocks of post-9/11 America and the current exploitation of Islamophobia casually found in Republican presidential debates, and you have a timely piece that inflames long-held prejudices and illuminates both sides of a seemingly-eternal conflict.

For ninety minutes, Jackson embodies Hare as he visits Tel Aviv, the Jewish settlement of Sheri Tivka, Gaza, Ramallah, and Jerusalem, ending with a visit to the Via Dolorosa and the Yad Vashem, the Holocaust memorial and museum. Dressed in a simple blue button-down shirt and khaki slacks, Jackson provides the performance chops eschewed by David Hare in his original production. Jackson easily embodies in voice and manner the various characters we meet on the way, including Hare’s young, hot-tempered translator, the zealous Zionist settlers, the bombastic Palestinian historians, politicians, and theater artists and poets he encounters, all of whom have a distinct story to tell.

The modest staging lets the audience unpack the text unencumbered. Jackson stands and paces, sits on chairs and hops back up, free to roam on the bare black-box stage (scenic design by Ryan Bates). Behind him looms The Wailing Wall, its big uneven stone blocks glowing eerily in blue light as Hare walks through the streets at night, glowing in warmer tones as he recounts his vivid interviews (lighting design by Matt Guminski). Add just a few sound effects for a sense of place—a plane takeoff here, some bars of music there—and the experience is complete.

I wish more Boston shows produced this experience. I wish more Boston productions told a politically relevant story using the art of theater to help the audience step closer to it. Since this kind of show remains rare, I challenge you to skip that Netflix show for just one night and head over to the Arsenal to experience something exciting and important.

New Repertory Theater’s Production of Via Dolorosa is playing now through January 31st, 2016, at the Arsenal Center for The Arts Black Box Theater.