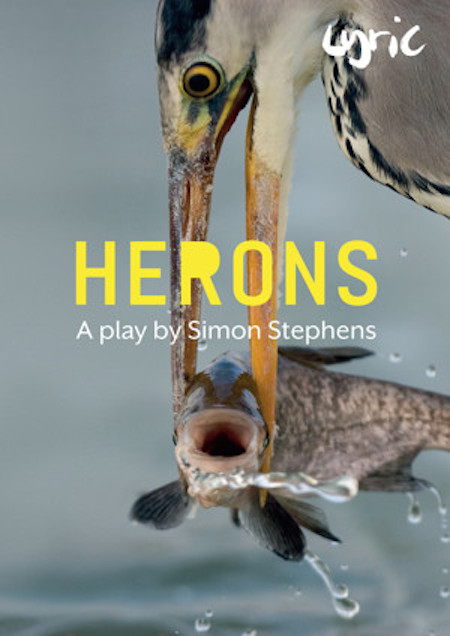 Herons at the Lyric Hammersmith

A potent and hard-hitting depiction of working class adolescence, Herons at the Lyric Hammersmith is a tough play, brought to life through Sean Holmes’ directing and acted wonderfully by its young cast.

Herons occurs a year after the death of a 15 year old girl, and while the cause of her death remains a mystery, it becomes clear fairly early on that the circumstances were far from innocent. We learn that the tragedy involved the brother of Scott, an aggressive but troubled teenager whose popularity seems to stem from peoples’ fear of him. We are also introduced to Billy, an awkward, strange but overall sweet boy in the school year below the other characters, who is doing his best to juggle a strained home life and keeping above the water at school. Littered with cruder elements of growing up in working class England, and the struggles of getting through comprehensive school life—swearing, peer-pressure, violence and bullying—the play paints a sombre, harsh and uncomfortable backdrop to the characters’ everyday lives but refrains from overstating the point or falling into cliché. There are moments of real tension and the clever writing keeps the intrigue and suspense flowing throughout.

While Simon Stephen’s original play was written in a formulaic style, Holmes’ reimagining has a non-naturalistic feel that increases the pace which adds to the intensity. Some scenes are played naturally, allowing for the truth of their situation to sink through, while at other times the fourth wall is broken down to great effect bringing a closeness to the piece. The cast of seven, of which five are teenagers, all provide very provocative and intelligent performances. Max Gill who plays Billy is likable and easy to empathise with. His scenes with the quirky and caring, if not slightly unhinged Adele, played by Sophia Decaro, provide touching moments as well as some great comedic lines. Despite the overall difficult nature of the play, humour is far from absent and is cleverly intertwined with the more serious moments.

The decision to cast a deaf actor as Billy’s mum worked perfectly, particularly as I had originally assumed this was a decision in the writing not the casting. While using sign language for the interactions between Billy and his mum adds an extra element to their complicated relationship, the issue of her being deaf is never mentioned nor acknowledged but rather accepted as normality. Despite commendable performances from the whole ensemble, Billy Matthews as Scott is by far the standout actor. His ability to convey anger, fear, confusion, arrogance and naivety was remarkable and this performance is a clear sign that he is a performer to look out for in the future.

The whole stage is covered with shallow water but otherwise largely bare, which allows for the raw performances to really shine through. During one especially striking scene depicting an attack on one of the characters, the water is used well to increase the drama of the fight. Aided by some clever choreography, this particular scene is remarkably brutal and highlights the dangerous reality of what children can be capable of. While most of the directorial gestures work well, at times some of the more stylistic decisions distract from the narrative and it would maybe work better to let some of the scenes play out naturally.

Overall, this is an intelligently put together take on a very well-written play which, despite being written fifteen years ago, feels just as contemporary now. The director trusts his very capable cast allowing very realistic and powerful performances. At 70 minutes long this is a relatively short show, but given that you are at the edge of your seat for most of the performance, you certainly won’t feel short changed from this triumph at the Lyric Hammersmith.