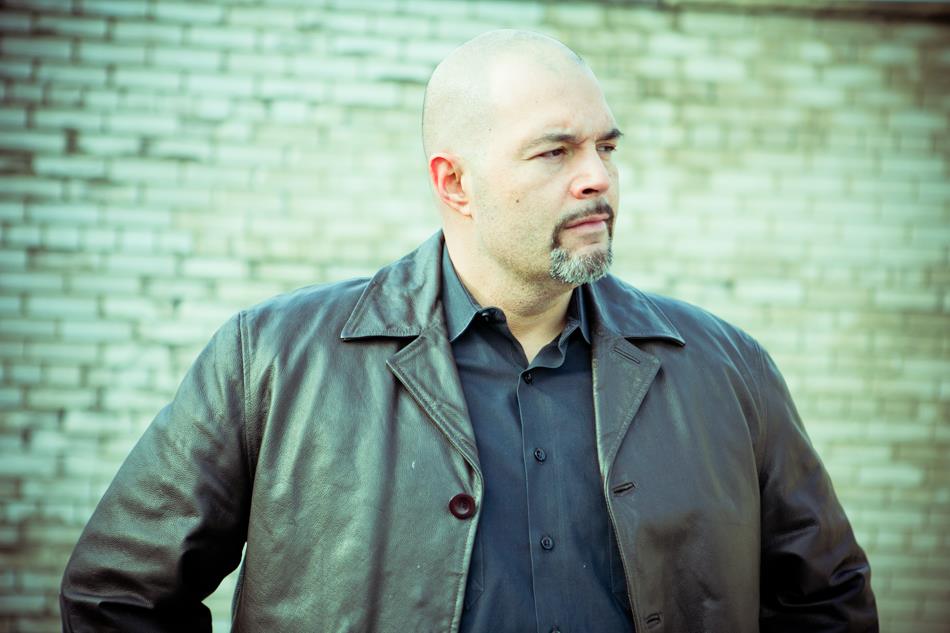 One of the first performances we saw in 2015 was also one of the year’s most memorable. Anthony played a tough and tortured cop in A Steady Rain, Paper Moon Productions’ tense memory play about best friends and partners torn apart by tragedy.

His role as Denny earned him an Outstanding Actor nod for the small theatre category.

Can you remember the first theatre production you ever saw?
I was actually cast in a show before I had ever actually had the pleasure of being a member of an audience. I was in Grade 4, and the school put on a futuristic production of Cinderella. If my memory serves me correctly, it was titled, Kinderella. I played a robot named Vroomo. Even though it was 37 years ago, I will never forget how much I loved everything about being on stage. The lights. The sounds. The attention. The reactions of the audience. The angst at not being cast as the lead! I have been hooked ever since.

When did you know you wanted to be an actor?
Even though my introduction to theatre through Kinderella was an epiphany for me, it wasn’t until I was 14 that I began to consider a career as an actor. Back in the early 80s, Dramatic Arts was not offered to students until Grade 10. Within the first two weeks of being in that class, I fell in love with acting. Even though, as most high school students in Ontario will remember, most of the first few weeks of class were spent acting like a pan of frying bacon, or pretending to be an iceberg, I was amazed at how comfortable I was when I was allowed to don a different identity, a different persona, even it if was salted pork. After I was cast in my first school play, Inherit the Wind, in Grade 11, I was ready to pack my bags for New York and set the world’s stages on fire. I am still waiting to visit the Big Apple.

What’s your favourite role you’ve ever played?
Although the part of Denny in A Steady Rain was an incredible experience for me, I would be remiss if I did not include my role as Stanley Kowalski from Streetcar Named Desire. It was such an honour being able to portray a role written by a legend of a playwright, and acted by a legend of the performing arts. Stanley pushed the boundaries of my limitations beyond what I could have ever expected. His violence, barbarism, passion, vulnerability and brute sexuality overwhelmed me. I experienced some profound catharsis performing that role and it is one that helped me to develop as an actor.

Do you have a dream part you’d like to play one day?
I really must try my hand at musical theatre at some point. My shower stall, if it could talk, would tell you that I love to sing. I am in the process of taking professional singing lessons because there are a few roles that I would love to play: Javert from Les Miserables and Caiaphas from Jesus Christ Superstar are two roles that I would love to play. I would accept any singing role that would spare the audience from having to see me dance! In all my years on stage, I have yet to sing in front of an audience.

Which directors and actors have had a major influence on you throughout your career?
I have had the pleasure of fortune to work with many talented and wonderful actors in Toronto who have helped me to grow and develop as an actor, Elaine O’Neal, John Palmieri, Marisa King, Ted Powers, Peter Church, Chris Cole, Olivia Jon, Randy Pryce, Andrea Van Slyke, Katherine Turner, Stephen Flett, Rachel Lambe Pryce, Randy Leslie, Patti Kazmer, and Peter Gooch.

How did you get involved with A Steady Rain?
My two very close friends, John Palmieri and Elaine O’Neal, started their own theatre company, Paper Moon Productions. They found the script for A Steady Rain, and invited me into their fold. As soon as I read the script, I was sold. However, knowing that I would be working with two extremely talented and experienced individuals made my decision easy. I will always be thankful to them for allowing me the opportunity to play Denny.

Tell us about developing your cop character. Did you do much research going into rehearsals?
Elaine had both John and I research the disturbing and disgusting Jeffrey Dhamer case. Because this play is based on the two police officers whose lack of diligence allowed Dhamer to escape, it was important that we understood the history of the case. However, in regard to the pain, guilt, and denial that Denny faced, a lot of my childhood memories helped me to understand Denny’s crisis. My father was a police officer on the Toronto Force for 36 years. In 1980 he was the Sergeant in charge of a missing six year old girl named Lizzie Tomlinson. I will spare you the horrific details, but my father found her remains. My sister was the same age as Lizzie at the time of her death. I will never forget the pain, anger, and anguish my father suffered because of his involvement in the case – pain that he never quite overcame. No amount of training or preparation can shield one’s psyche against that sort of trauma. My father’s experience helped me to empathize with Denny’s plight considering his character was wracked with guilt and denial for the near death of his one child, and the murder of three other individuals in the play, one, a new born child.

John Palmieri played your best friend and partner. What was it like working with him to portray such a longstanding bond on stage?
John is like a brother to me. We have worked together several times in the past, and he is one of my closest friends; therefore, I must confess, sharing a bond with him through our characters was a very easy and natural transition. He is a very talented actor and we balance each other very well. The rehearsal process was challenging for both John and I because the development of our characters demanded that we delve into some fairly dark and unpleasant territory within ourselves. No matter how challenging the scene, we were always able to support and motivate each other. I think this dynamic transferred well to the stage.

The small performance space at The Grocery meant the audience was right in your face. How did the intimacy of the venue affect your experience of the production?
Although I know of no actor who would begrudge performing on the world’s most prestigious stages, I truly enjoy the experience of having the audience in my lap. I have performed several times on a thrust stage; I find the intimacy of the audience’s proximity to be quite empowering as an actor. The audience’s reactions on such a stage are palpable, especially to the gravity of a play like A Steady Rain, and it allows me to completely envelop myself in the role as I feed off of their energy.

What are some of your favourite moments from the production?
Anytime people work with a script that is dark and devastating, it is important to use levity to keep one sane. Throughout the rehearsal process, Elaine, John, Devon and I would try to keep the mood light by using Huff’s own unique of crafting curse words and insults, all with a Chicago accent, on each other. By the fourth of fifth rehearsal, we all had a repertoire of slang and insults, none of which are fit for publication, that we would sling at each other. Some of the jargon still lingers today.

What are you doing now/ what’s your next project?
Paper Moon Productions is looking at mounting another Canadian play in which I am hoping to act. I don’t want to say too much, because I don’t want to ruin the surprise (and many details still need to be addressed). However, I am very excited about the prospect as this is a play that I have wanted to mount for years!

Do you have anything you’d like to add?
I was so humbled and honoured when I heard that I had been nominated for this award. I share this honour with Elaine O’Neal, John Palmieri, Devon Potter, and Marc Siversky.