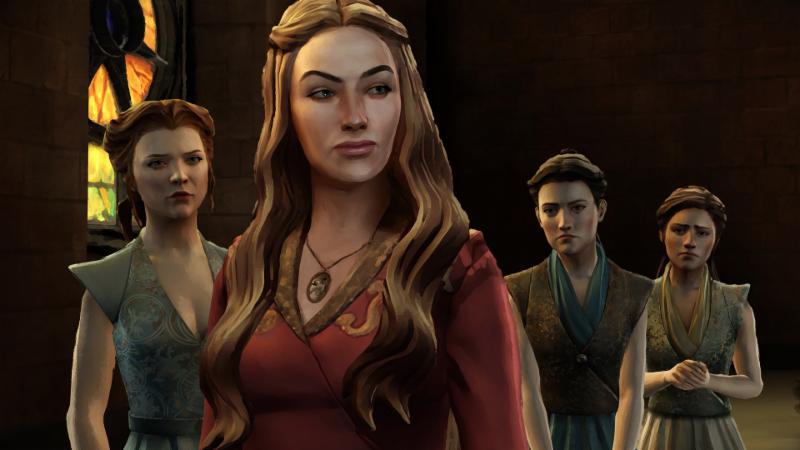 Minor spoilers from the TV series to follow, primarily up to the end of Season 3 (specifically, the ‘Red Wedding’ event).

Following on from the success of the excellent The Walking Dead series, Game of Thrones is one of the latest franchises to be given the cell-shaded, decisions-based treatment from Telltale Games. Overall, the decisions are intriguing and the consequences uncertain (much like the TV series), but while the transition from TV to RPG is by-and-large smooth, the game ultimately falls a little flat. Few decisions ultimately carry weight and numerous plot threads don’t really go anywhere in particular in what is quite an unbalanced venture into the Hobbesian world of Westeros. It is certainly worth a play for some of its more climactic moments, but expectations should not be raised too highly in the likely event that they will ultimately lead to disappointment.

Encompassed within the same brutal, harrowing and pseudo-fantastical world of George R. R. Martin’s creation, the game focuses on House Forrester, a hitherto unheard of House sworn to the northern overlord faction, House Stark. The game begins at the Twins just before the Red Wedding, and focuses on its aftermath and the impact it has on the Forresters, who are thrown into a new and uncertain environment, in which the titular ‘game’ must be played carefully to avoid annihilation. With characters from the TV series popping up from time to time, Game of Thrones follows a number of members of House Forrester as they tread a fine line appeasing the monstrous Ramsay Snow and dealing with an impending conflict with a rival House. As can probably be gathered from this long synopsis, the game relies heavily on a good knowledge of the Game of Thrones storyline for players to fully understand and appreciate its story. Certainly, novices to the franchise might want to watch at least the first three seasons to get to grips with the overarching plot before diving in.

The main gameplay is primarily dialogue-driven, with intermittent ‘quicktime’ events used to cover the more action-based sections. Decisions are often difficult to make and have harsh repercussions in the short-run, much to the game’s credit. There is no real ‘right’ decision in each confrontation the player is thrown into, as shocking moments come completely out of nowhere and you often feel you have entirely made the wrong decisions. This makes the game unpredictable and quite engaging throughout. Mira’s storyline particularly stands out, as she is forced to navigate her way around the darkened and intrigue-filled corridors of King’s Landing, where alliances are hard to come by and the focus is entirely on subtext. I found myself becoming more and more Machiavellian as the plot progressed, as the game forces you to adapt to a world in which honourable people are few and far between, or more likely dead.

Turning to events at Ironrath, the Forresters’ (rather weakened) stronghold, the decisions are similarly difficult to make, though the story perhaps makes you feel a bit too downtrodden at times, with no real relief. This is one of the main flaws of this series, since the TV iteration, in a similar fashion, successfully delivers cruel, agonising harshness but is nonetheless permeated by moments of hope or at least suggestions that things might work out for them all, even if they ultimately don’t. When applying this to a video game, there needs to be at least some of this faith that things might get better, otherwise the game just leaves you feeling quite powerless and unfulfilled. Without spoiling too much of the series, the game does ultimately leave the player largely unsatisfied. In particular, some elements of the plot are just left unresolved, perhaps leaving room for a possible sequel, but are still irritating, particularly since the game took almost an entire year to fully release all six episodes. More technically speaking, the graphics are also quite disappointing and there is consistent jittering throughout. There are also numerous bugs, including one instance when the game forgot all my previous decisions and I was forced to wait for a correcting patch before I could play on. These remaining issues with the game’s engine have been something that Telltale seems to expect us to just put up with, but it is getting increasingly frustrating that there hasn’t been any marked improvement as new series have been released. The ‘quicktime’ events are also largely distracting and don’t add much interactivity to the game’s action sequences.

In all, Game of Thrones is an uneven experience that at times delivers tense and absorbing sequences, but is marred by the constant feelings of hopelessness it inspires. It also has a number of technical problems that often distract from the game’s plot and are becoming more and more unforgivable as new framchises join the Telltale roster. For fans of the series, this game is probably worth a play if you are willing to put up with its faults, but if you are new to the story, I would at least watch the first few seasons before heading into this harsh and bitter world. When you play Telltale’s Game of Thrones, you don’t really win and a fair few people will probably die, but that doesn’t mean that there isn’t at least some entertainment to be had along the way.