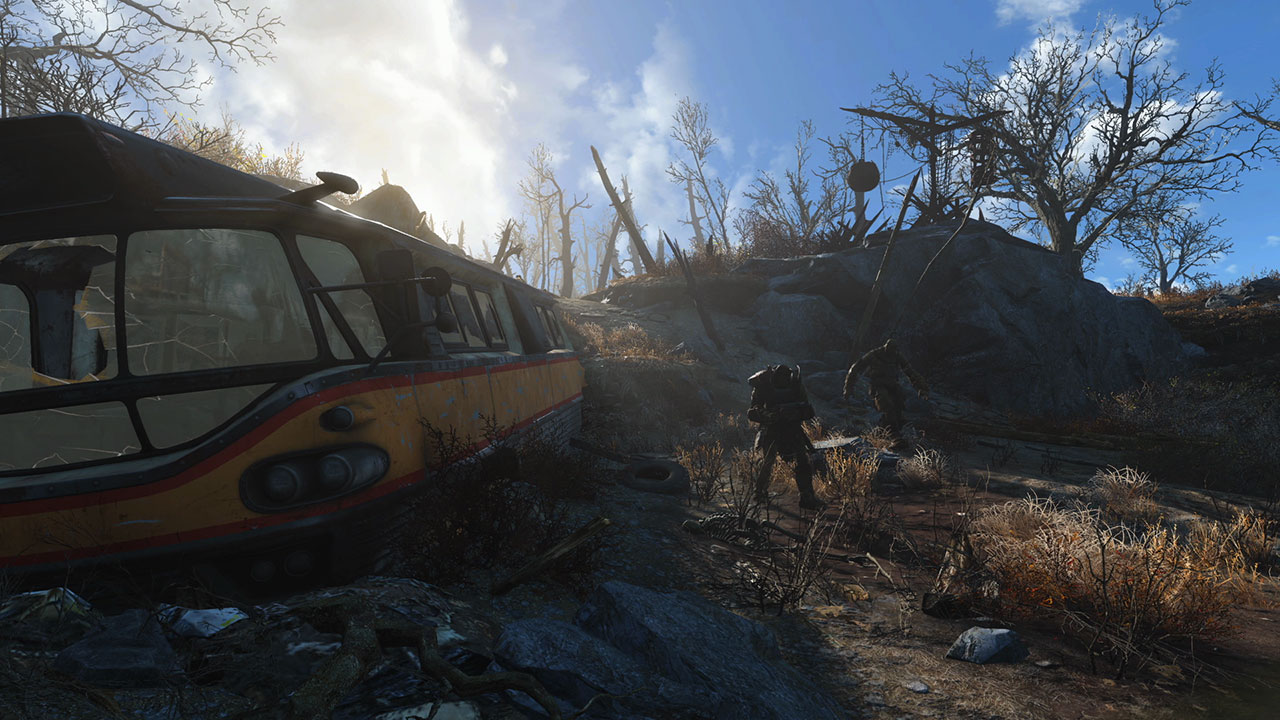 Fallout 4: A (Rough) Diamond in the Wastes

*Minor spoilers ahead, but only for the first hour or so.

Playing any Fallout game is an unusually strange and charming experience. Set in a future post-apocalyptic Boston, but in an alternative timeline in which the world never really got over the 1950s, there are few games with such vaulting ambitions as Fallout 4. But while the road of the wanderer is a little rocky at times, these ambitions are largely met in one of the most expansive, entertaining and downright best value-for-money games I’ve ever played. Over 65 hours later and still itching to get back in, this is certainly the best in the series, if not also one of the best games of the year.

Set a decade or so after the events of Fallout 3, the story revolves around you, the sole survivor of a vault just outside Boston, searching for your missing son. However, your son will likely have to wait a while, as there are a multitude of quests upon which to embark, factions with which to meet and people to help/steal from. Fallout 4is remarkably open in the almost limitless ways in which you can play it, providing a welcome change to a more colourful world in which to explore. The ‘Commonwealth’ is full of hidden treasures just waiting to be uncovered, with interesting side-quests a plenty to undertake. The main story itself is also thoroughly enjoyable and far from a cut and dried affair. I found myself utterly torn in which faction to support, with each holding an intriguing but flawed ideology. Of course, you can also just be a jerk to everyone, support no-one and hoard everything for yourself – the choice is entirely up to you. There are also a number of Easter eggs, references and other hidden stories within the world that put a smile on your face whenever you encounter them. There’s a remarkable lot of bang for your buck in Fallout 4.

Turning to the gameplay, the shooting mechanic has also been much improved from Fallout: New Vegas and guns definitely have a good punch when firing them. The historically RPG elements of the first few games have also been sensibly slimmed down, streamlining the experience and getting rid of unnecessary repairing and an over-use of skill trees. Some RPG die-hards will resent this, but by and large, it was a wise decision. The customisation options are an excellent new addition and FINALLY make collecting previously worthless junk more than just a weird compulsion. Now, anything you collect can be broken into its raw component parts and used to craft better weapons, armour and the tank-like power armour. They can also be used to assist in the addictive base-building element.  By and large, the customisation options are great, though I was a little disappointed that most of the cool clothing you discover cannot be modified, leaving you likely confined to your vault suit for much of the adventure. The addition of a voiced protagonist also works fine and the voice acting is generally well-done. However, the dialogue system is rather irksome, now summarising previous full descriptions of speech choices into one or two word generalisations. This means that you’re never really sure what your character is going to say, as the ‘sarcastic’ option, in particular, can be either quite funny or downright mean or rude.

On a more technical level, the graphics look pretty good, if not spectacular and the frame rate holds up fairly well. The UI is, however, a little too obtuse, with very little explanation given to several things you can do. For instance, the settlement building is very poorly explained, which is a shame since the builder in me spent hours developing settlements across the wasteland and it is a great new feature to the franchise. Some dialogue is also overly repeated and there are too few additions to the otherwise brilliant radio station: the juxtaposition between the otherwise upbeat and optimistic nuclear-themed 50s tunes and the devastated wasteland is sublime, but there are certainly not enough of them.

However, despite these flaws and the many technical problems, Fallout 4 nevertheless manages to do something that is extremely difficult in gaming – you’re willing to forgive its faults because of the outstanding foundations on which it lies. There is so much to do, so much to explore and so much sheer life in this game that you’re happy to put up with the downsides. I’ve rarely been this invested in a game and had this much fun playing one, which is a quite a unique place to be in within this world in which you’d sometimes be lucky to have 10 hours of play-time from a full-priced game. Fallout 4 is a rough and imperfect gem, but a precious one nonetheless.