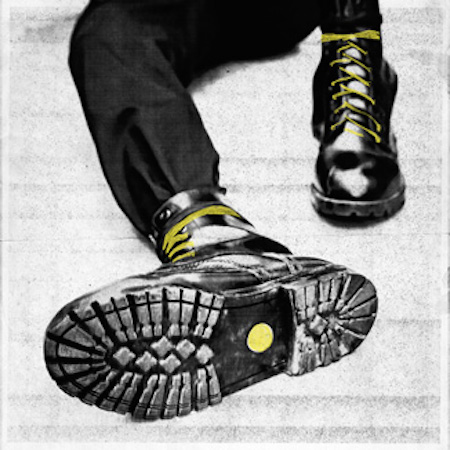 Barbarians at the Young Vic

It is rare a director is so sympathetic to their chosen text; therefore, remember Liz Stevenson’s name. Too often a classic work is smothered by conservatism and theatrical brocade—this production of Barbarians is the opposite, where every direction furthers the purposes of the source. Stevenson’s interpretation is a great symbiosis of text and performance.

Of course, the text’s excellence is foundational here: Barrie Keeffe’s 1977 play tells the friendship of Paul, Jan and Louis, three jobless skinheads who drift into a world of petty crime and football. Structurally, it comprises three acts, each substantial enough to be self-contained productions; however, it is the subtle set-ups and payoffs that make the play’s final moments so intense. Act one sees the boys spot a car for Paul’s criminal uncle while also crashing a young Tory banquet; Act two focuses on the boys’ failure to see the FA cup final at Wembley; Act three has them meet years later outside the Notting Hill Carnival. Each scenario sees the boys as outsiders, barbarians in the traditional Greek sense. They are left out of the circles that make up a functioning society: they are jobless, apolitical, cultureless and specifically denied access to the football club they spend a whole season supporting because richer people can afford the tickets. It this persistent exclusion that forms anomie, and it is in anomie that basic respect for others breaks down: radicalisation ensues. It is crucial, though, to realise that Barbarians is not a plain condemnation of the racism that prospered in the skinhead revival of the late 1970s. Keeffe is more objective: the structural failures of British society to accommodate its classes is what leads to appalling behaviour: while differentiated in terms of character, Paul, Jan and Louis are not evil people. Crime comes naturally to them because their country has failed to provide them the motivation to pursue anything else; racism develops because the characters (bar one) do not have the rational sensibility to realise their own government is to blame. What sets the play apart from other depictions of skinheads is that it does not indulge in condemning the emergent racism. In fact, it is not at all clear that the story will head in that direction: as I watched the play blind, I assumed the casting of Fisayo Akinade as Louis was immaterial; even the references to his skin colour seemed as though the director had taken artistic liberties. It was only in the masterful finale that the significance of race was revealed. Keeffe’s subtlely in letting this develop through the three acts is accomplished, and makes the recognition of systemic failure so much more persuasive than an explicit take would.

Stevenson understands Keeffe’s treatment of social immobility: the boys are agitative, thrusting around with endless kinetic energy. The staging emphasises this: traverse, with catwalks behind each side that the boys use to escape the tension of the centre aisle. The decisive decision in the staging—and it is something that a less competent director would have so easily misstepped in doing—is that the piece is never Brechtian in relation to actor and audience. The characters never enter the audience’s space; they only stalk the perimetre. This is crucial as, save for some 4th wall breaking, the character’s isolation exists on a formal level too; they are unable to access our ranks as audience members and for this their desperation is more present. Even though the characters move through many levels—the stage, a raised platform, the catwalks and the stairs—this only serves to highlight that no matter how hard they try, the circles that they wish to access are inaccessible to them. Stevenson’s appreciation of this is the best highlighted by the monolithic wooden wall that doubles as a side of Wembley stadium—the stark impenetrability of it (credit to designer Fly Davis) contributes a terrifying image: it shows the hopelessness of human endeavour in the face of the insurmountable. Credit must also be given to the more implicit contributions of the light (Matt Leventhall) and sound (Peter Nice), which mediate between ambience and noise-ridden ska-punk explosions. Despite Stevenson’s calibre, there are some obstacles that she responds to poorly: it takes too long for the each act to settle its tone: her direction should do more bring the audience into each of the acts’ openings as the minimalism she adopts is not wholly immersive and therefore relies too much on the text to place the audience in its atmosphere. Furthermore, her production fails to hide the triteness of some dialogue, particularly the hamfisted observations in the second act of the rearrangement of post-war institutions—football as religion is not as shocking a revelation as it once was. Nevertheless, these are criticisms that emerge primarily from the text itself and are perhaps insurmountable without heavy editing.

Stevenson’s inspired direction would mean little if not for her actors. With such a technical minimalism, the believability of character is essential and Brian Vernel, Alex Austin and Fisayo Akinade deliver spectacularly: Akinade aptly convinces in his journey from friend to outsider. Austin portrays the disturbed mind of a criminal-come-soldier with harrowing reality. Vernel has the hardest job of the three, as on face value he is by far the most unlikeable; however, he craftily illustrates the issue of causation that runs through the play: he plays the evil of his character as being caused by the conditions around him rather than his own agency. It this essential characteristic in his performance that makes his character tragic rather than menacing, and it is a genuine feat of talent that he communicates this.

Ultimately, Barbarians wins its argument: we need to do our best not to alienate certain strata of society: the consequences, the worst of all being the ensuing extremism, are so undesirable that we cannot repeat the mistakes we once made. By working for the strengths of the chosen text, Stevenson and her team have produced something remarkable at the Young Vic.

Barbarians runs from until 19th December. Tickets are £10 and £15. Before concluding, it should be known to the reader where this production came from. This is especially important given the current lack of arts funding that the UK provides. Liz Stevenson came to direct this production because of the JMK trust, which selects one director a year out of hundreds to realise their vision of a classic text. Due to the pedigree of this production, it is clear that more funds like these need to be developed.