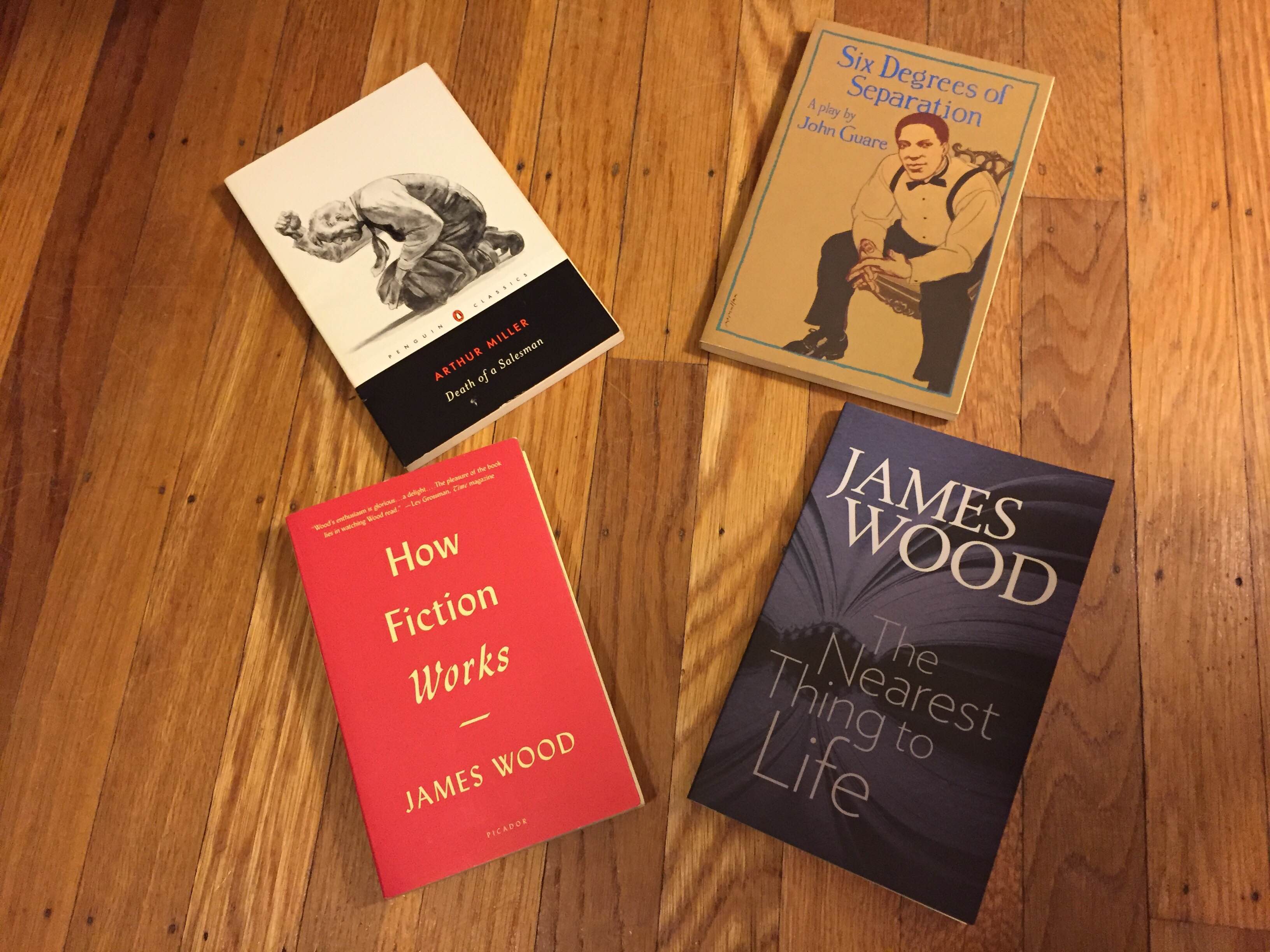 This month, I’m rolling up my sleeves and plunging into two plays and two books that will recharge my critical batteries. These four brief choices will come as a relief after the doorstoppers I recommended last month.

Arthur Miller’s Death of a Salesman
All My Sons was the play that finally launched Arthur Miller’s sterling career as a playwright, but Death of a Salesman permanently embedded Miller in the American theater canon. Disillusionment, failure, bitterness, disintegration: traveling salesman Willy Loman is forced to tally up his life and come to terms with what it really adds up to.

The play was first performed in 1949, and it won the New York Drama Critics’s Circle award for Best Play, the Tony Award for Best Play, Best Supporting Actor, Best Scenic Design, Best Director, and Best Author, and the Pulitzer Prize for Drama. It has been revived four times on Broadway (one of the biggest artistic regrets I have is not having made the time to go see Phillip Seymour Hoffman in the title role, in 2012), and is continuously performed in the U.S. and abroad.

Brooks Atkinson of the New York Times wrote these words after the play’s premier:

Writing like a man who understands people, Mr. Miller has no moral precepts to offer and no solutions of the salesman’s problems. He is full of pity, but he brings no piety to it. Chronicler of one frowsy corner of the American scene, he evokes a wraith-like tragedy out of it that spins through the many scenes of his play and gradually envelops the audience.

To complement reading the play, Netflix has delivered to my door the 1985 film adaptation, for which Dustin Hoffman won an Emmy award for Outstanding Lead Actor.

John Guare’s Six Degrees of Separation
Eight years ago, I sat in a personality psych class lecture at BU, and watched the 1993 film adaptation of Six Degrees of Separation, starring Donald Sutherland, a delightful Stockard Channing, and an absurdly young Will Smith. Loosely-based on real life events, the play and the film revolve around the figure of Paul, a young black man who manages to convince several wealthy Upper East Side New Yorkers that he is the son of Sidney Poitier, Bahamian-American star of stage and screen. What follows is a comic and poignant exploration of identity, of self-creation, and of the often cruel indifference familiar to those who walk the streets of New York City.

I was very intrigued by the film, so much so that two years later I found myself writing a reception history of the play for a drama class. So when I heard that Bad Habit Productions will be staging the play in November at the BCA, I knew I wanted to revisit the text carefully before writing my theater review of the production.

The lines that have resonated the most with me are spoken by Ouisa, one of the Manhattanites taken in by Paul’s tall tales. She alone proves incapable of confining Paul to a charming anecdote fated to entertain audiences at an endless series of cocktail parties. Channing’s eyes are wide with anger and disgust, and her voice shakes with reproof and grief as she chastises her husband, Flan:

And we turn him into an anecdote, with no teeth, and a punchline you’ll tell for years to come: “Oh, that reminds me of the time the impostor came into our house.” “Oh! Tell the one about that boy.” And we become these human jukeboxes spitting out these anecdotes to dine out on like we’re doing right now. Well I will not turn him into an anecdote, it was an experience. How do we hold onto the experience?

James Wood’s The Nearest Thing to Life
James Wood is one of my favorite critics writing today, and his words and observations have impressed me years before I even knew I wanted to be a critic myself. The New Yorker magazine book critic has released a new book that is half criticism, half memoir.

Amit Chaudhuri of The Guardian has called him “the foremost literary enthusiast of our time,” and he praises him even further in his review by describing him as a “an excellent reader and a marvelous memoirist.”

In an interview with Electric Literature, when asked by Steve Paulson whether a critic could be described as a “very good reader,” Wood gave a pleasingly democratic response:

I think so. There’s a pleasing amateurism about literary criticism despite the fact that it’s now enshrined in university programs. A professor of literature at some fancy university is not necessarily a better noticer than an ordinary reader. The advantage, of course, is that the professional reader has a broad scholarly knowledge. But there’s not much more that you can do as a critic than try to train your noticing, and to read a lot so you can do comparative reading.

As I search for ways to improve my critical acumen, I lap up any such advice. Thankfully, Wood has also written another book that can help me out…

James Wood’s How Fiction Works
I was amused reading Walter Kirn’s New York Times book review of How Fiction Works. He finds Wood’s attempts at accessible language and simple presentation of his ideas patronizing, disingenuous, and self-promoting, and he seems to take issue with the entire premise of a book that can neatly package a whole genre of writing, an ancient mode of storytelling, into a slim volume. Perhaps he is right. But even he gives Wood grudging complements, smothered in healthy heaps of sarcasm and needless vitriol:

…to make himself even less intimidating, even more approachable, Wood (who writes these days for The New Yorker) has us know that every passage he cites in demonstration of his theories comes from “the books at hand in my study” rather than, as the common reader might fear, the entire New York Public Library or, even more distressing, his memory.

Wood’s study must be vast, with well-stocked shelves, judging by the inarguable erudition displayed in his compact vade mecum of short chapters and neatly numbered sections devoted to such topics as point of view, characterization, fictional detail and, toward the end, nothing less than “A Brief History of Consciousness.”

I’m not put off. The first time I met Wood, I asked him what a young critic should do to train his/herself in critical thinking and writing. After admitting that any answer he could give me would probably be unsatisfactory, he emphasized the importance of “being totally familiar with the form,” the artistic genre you write about. Kirn can disdain this project all he wants: I admire that a critic such as Wood would even attempt to present his own blueprints for how fiction operates, using a range of exemplary works from the Western canon.