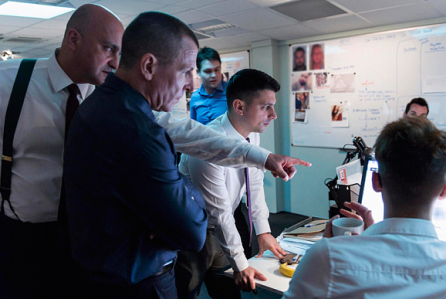 My relationship to reality TV is uneven. I’m fanatical about Survivor, grumpily fanatical about Big Brother and the Bachelorette, passively loyal to So You Think You Can Dance, and sporadically interested in American Idol and Dancing with the Stars (there was a Backstreet Boy on this season! I couldn’t not watch). I long ago gave up repetitive but solid talent shows (Top Chef and Project Runway) and I abandoned The Amazing Race when I finally got unspeakably bored. I have zero interest in almost any docu-series show (those are you Kardashians and Housewives and Ice Loves Cocos). Basically, reality TV development for me topped out in 2001 when Big Brother figured out their format and nothing since then has been able to even remotely compete with the one-two punch of CBS “vote each other off” social experiments. Until Hunted.

A 6-episode series out of Britain (now being developed for the US), Hunted looks a little bit like The Amazing Race but the teams (some individuals, some pairs) are running for their freedom instead of towards a prize. 14 citizens get a phone call telling them they have a one-hour head start before they spend 28 days on the run, hunted by a team of specialists armed with all the surveillance privileges of the state (some simulated because, thank god, the government is not going to give a reality show access to their surveillance data).

If there is a prize of some kind, it’s not part of the show. It’s more like new-school Survivor where a lot of the castaways are competing less for the money than for the title. The contestants on Hunted (known as “fugitives”) want to prove that they can beat the system and, because the show’s premise is so timely and terrifying, surviving the manhunt gives them a sense of independence and power over a surveillance state that works with remarkable efficiency.

Some of the fugitives only last a few hours. One pair gets caught accidentally when the hunters are investigating an unrelated lead. Even the most promising contestants (a pair of savvy brothers with a solid plan and a solo survivalist with an extensive network of accomplices) fall prey to overconfidence or are betrayed when the hunters put their faces on wanted posters and a price on their head. The show smartly avoids even a hint of monotony by playing fast and loose with the structure. Though the hunt takes place over one set of 28 days, we don’t follow all 14 fugitives from the beginning. Only one team appears, however briefly, in every episode. Some have two or three-episode arcs while many dominate as the key players of the week but are captured by the credits, making their entire experience on the run into a bottle episode of sorts.

The more steady presence episode to episode is the hunter team, a threateningly clever and dedicated group of mostly former law enforcement (including CIA and FBI experts) whom the producers smartly humanize to complicate the viewer’s moral experience of the show (one of them is a lovely, charming lady who looks like JK Rowling. It’s very difficult to root against JK Rowling, even when she’s hacking someone’s cell phone). The lead-following, strategy developing, online stalking and personality profiling happens at HQ in London but on-the-ground tracker teams are stationed across the UK (contestants aren’t permitted to leave the country, which means almost all of them at some point try to hide in Wales), ready to search the fugitives’ homes, interrogate their families, or chase them down at a bus station hundreds of miles from where they initially went on the run.

Hunted was the most tense, high-stakes six episodes of television I saw this year. The psychological drama was intensely compelling and the down-to-the-second Argo-like finale had my heart racing and, eventually, my tear ducts flowing. It’s a must-see for anyone who thinks that the quality reality TV landscape lives and dies on Survivor alone. There are still new ideas and soon American TV audiences will get Hunted.