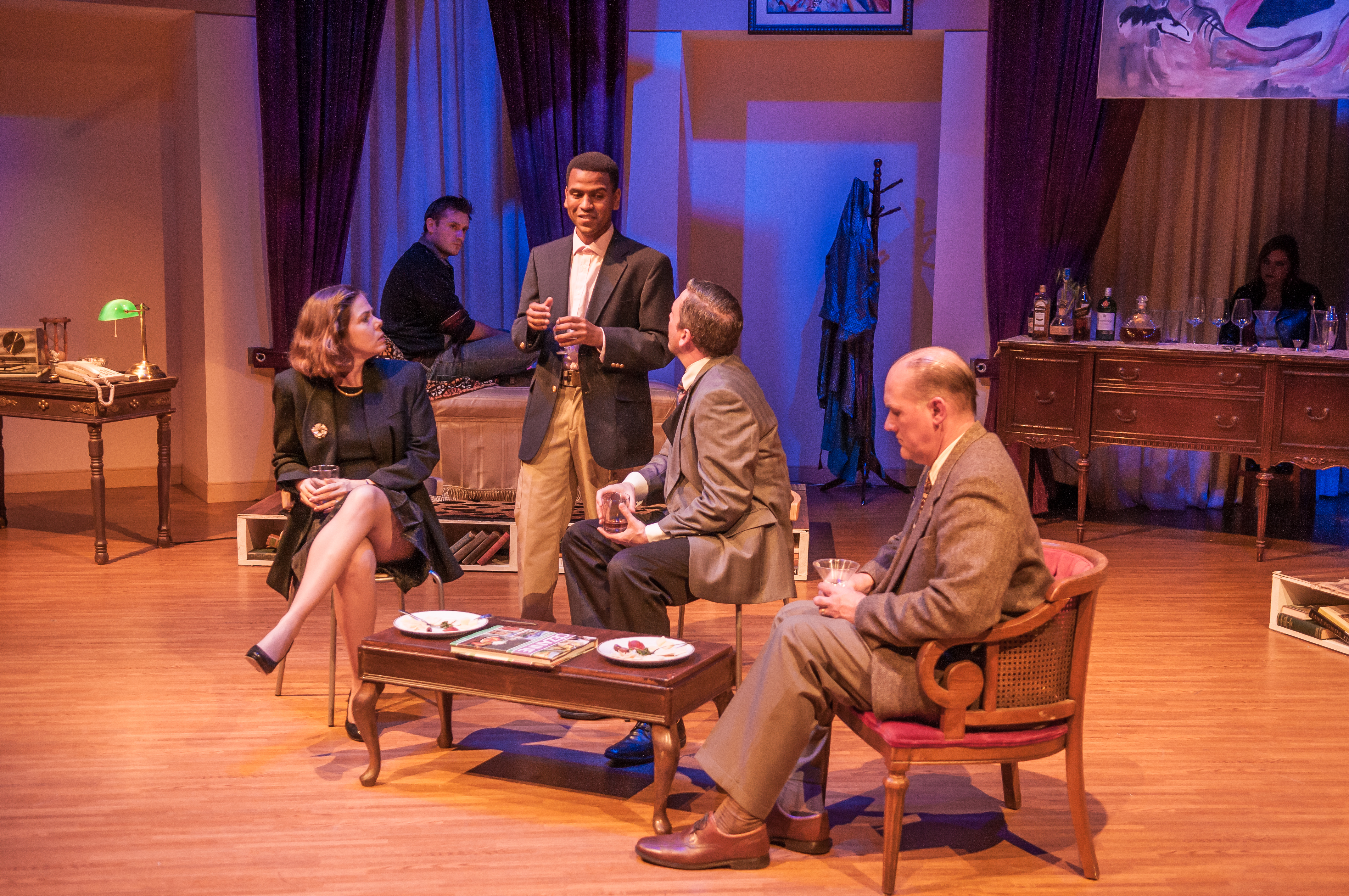 Fleet, comic, utterly cosmopolitan, Six Degrees of Separation is one of John Guare’s sharpest works. Loosely based on real-life events, the play revolves around the mysterious figure of Paul. This young man manages to impress and verbally seduce his way into the homes of some Upper East Side Manhattanites. Two couples and a Jewish doctor are taken in by Paul’s suave manners, artistic sensibility, and witty repartee. They are also impressed by his bold-faced lie: he claims he is the son of Sidney Poitier.

Liz Fenstermaker directs Bad Habit’s lively production in an intimate hall of the BCA. The audience sits on the periphery of the Kittredges’ tasteful living room—outlined by its lovely hardwood floors (carpentry by Joe Ouellette)—gazing up at beautiful works of art hanging from the “ceiling” (scenic design by Kevin Deane Parker). There are some lovely Cezannes, but the room is dominated by a large, two-sided Kandinsky, which swivels to reveal splashes of chaos and controlled geometric outlines.

The play is swift, and quick changes in characters and moods are required. We hear most of the story from Flan (Steven L. Emanuelson) and Ouisa Kittredge (Christine Power), private art dealers living “hand to mouth on a higher plateau.” As if we were all guests at a cocktail party, they recount to us their encounters with Paul (Elyas Deen Harris): how he charmed their millionaire South African buddy Geoffrey (C.D. Matthew Murphy); how he fooled another couple, Kitty (Janelle Mills) and Larkin (Steve Auger), as well as Dr. Fine (Murphy); and the tragic impact he had on the lives of the Utahans Elizabeth (Dani Berkowitz) and Rick (Ben Heath).

Overall, the production kept good pace. But there were moments that could have been served with more vehemence. Take the amusing incident of the naked hustler (Alex Portenko, not actually nude in this staging). Half the comedy of that encounter is in the wonderful and ludicrous combination of his obviously weaponless state and his aggression, in how he reduces Flan and Ouisa to abject terror by his mere “dirty” presence in their “spotless” home. The lack of a physical confrontation between them (in this production, the hustler never touches Flan, though the stage direction calls for it) took some of the punch away.

Likewise, during Ouisa’s final argument with Flan, in which she calls him out for allowing the experience of knowing Paul to sink into nothing more than fatuous anecdote, this crucial confrontation becomes hazy and somewhat confused as staged. They both recline calmly on a sofa while the spotlight shines on Paul in the middle of the room. It’s interesting to have a visual emphasis on Ouisa’s inability to get Paul off her mind, but some of Ouisa’s sharpest lines in the play get muddled as a result.

I’m also uncertain about the decision to have actors not actually in certain scenes visibly hang out in the background of the set. Simultaneous action on stage proved interesting, but just having some characters looming in the shadows didn’t seem to serve any particular purpose. Having actors sit in the front row, allowing for quick character/costume changes, was the more effective and less distracting technique this production used.

The production was fabulous at creating ambience. Hints of Miles Davis’s Kind of Blue and other jazz tunes (sound design by Andrew Duncan Will) meshed nicely with PJ Strachman’s wonderful light design. The drab grey light of a police station, the warm pinks and yellows of Flan Kittredge’s dreams, the stark spotlight of Rick’s devastating confession…every scene was deftly colored with a painterly touch.

Although I appreciated Emanuelson’s rendition of the comfortable Flan, and the pensiveness Power brought to Ouisa, I was more interested in the performance choices of the secondary characters. Murphy made the transition from manicured millionaire to hard-nosed detective to neurotic doctor seem easy. Berkowitz brought a pleasing aggression to Elizabeth that I had not previously seen in that role. Kevin Hanley was convincingly snobbish and wistful as Trent Conway, “the Henry Higgins of our time.” And Heath’s outburst as the spoiled scion Woody and his tearful regret as Rick made for the funniest and saddest moments in the play, respectively.

I’m mixed in my assessment of Harris’s portrayal of Paul. On the one hand, I was intrigued by his slightly-shy-yet-eager demeanor. As Harris spoke Paul’s Catcher in the Rye speech, I wondered whether this Paul actually felt moved by his plagiarized words. This was no con-man putting on a performance; this was a lost young man grasping desperately at a new, and idealized identity.

And yet, it was hard to make sense of what this Paul was like before he met Trent. Trent purports to teach him about enunciation, about the mannerisms and verbal affectations of the rich. But Harris played Paul kind of the same before he met Trent and after, with the same bashful intelligence, the same physical hesitance. Here is no man suddenly made aware of this glint of opportunity, eager to absorb key information in the form of social cues as well as demographic data. The power of Paul’s penetration of the middle-upper echelons of New York society is undercut if the only thing he needs to arm himself is the information granted to him by an address book, and a few factual details about their lives. If we are unconvinced of the desire to utterly transform himself, what comes next does not seem wondrous.