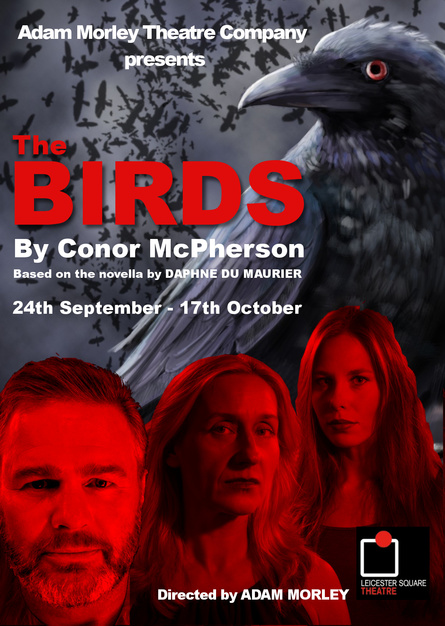 The Birds at the Leicester Square Theatre

It would be easy to dismiss this show—it is really all shades of bad—yet I am going to try to be critical and constructive with terseness.

The play is three people in an apocalypse scenario seeking refuge from killer birds. This kind of story demands extremities of feeling, the kind which requires experienced actors if it is to work on stage. Conor McPherson’s script is actually well-balanced: thankfully the birds do not fill up the story and instead emotion dominates. What is written is good and there is enough difference in the characters for drama to exist but it asks far too much of its actors.

Emma Taylor has issues with an American accent which is distracting and the accent should have been discarded for an English one. Her lines are also undersold despite the inherent intensity of her words (‘I am a god’ for example). Alice Marshall is capable in her role, although it is often hard to believe her character’s religious inclination. Glenn McCrory is easily the most curious actor: his character mentions his character having some mental disability and he acts like it—I am not being mean here: he quite refreshingly underplays everything although there is little spontaneity to his lines and eventually his limited range fatigues the audience

The theatre’s layout is so poor that it blocks an unfair amount of what Adam Morley has directed. Morley must be partly to blame for this since any action that happens on the ground level is completely obscured for those not in the front row. The way the actors leave the room to ‘go outside’ is clunky. The bird noises are far too loud, especially in the first 20 minutes of the play

The Birds is a misfire by the Adam Morley Theatre Company, but McPherson’s script could be handled better by another production in the future.