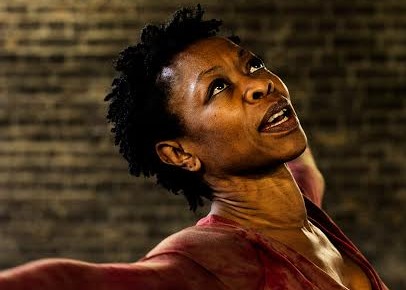 Sarai at the Arcola Theatre

A one-woman show is playing at the Arcola Theatre. It tells the story of Sarai, a barren woman who heard a prophecy telling her to leave her home and create a new nation. While this may seem strange at first, it does not take long for the audience to get swept into the narrative told by Sarai herself, portrayed by Karlina Grace-Paseda.

It is no easy task to keep a room of spectators attentive for 90 minutes when there is only one person telling the story. This actress does it magnificently. Through her, reality changes from a 21st century theatre production in East London to a far away land. A land of desert, struggle, drought and disease, a land where Sarai and her husband must lead thousands of people to a new home, a land where Sarai’s wish to bear a child takes over her thoughts. The play by Paul Anthony Morris is a beautifully written script that Grace-Paseda interprets in a way like no other. The actress’ dance training is noticeable due to her tremendous elegance and movements while she explains more dramatic moments of her life. While there are times where Grace-Paseda seems to have lost her train her thought, this can only be normal given the tremendous task of embodying an entire performance. There are few if not no complaints to mention. Karlina Grace-Paseda is Sarai and her acting is of a quality that is rarely witnessed.

Noise and music are very important aspects to this performance. Indeed, as the audience walks in, already the stage is set up with percussion, flutes, a trumpet and a cello, all decorated with a tribal pattern. If Sarai is able to take everyone into another world, it is thanks to this music. When she is particularly happy or distraught, the music changes to fit her mood. Through this, the whole room feels Sarai’s emotions, whether they be fear, happiness, or discontent. As the story seems to be set in Arabian deserts, the music is well suited for this. Similarly, the use of surrounding noises is a wonderful way to bring everyone through the raids, the deserts, or even the emperor’s palace in the same way that Sarai lived these events.

The set design is rather minimal, and at times maybe a little too minimal for it can become a little difficult to understand exactly what it going on. Nevertheless, it serves the purpose of portraying a woman with few belongings making her way through the vast Arabian deserts. There are many different cloths, each of them associated with a different part in Sarai’s life. This use of materials is a beautiful artistic choice on the part of the set design. Some are used as shelter, others as dresses while others require more imagination to picture a baby in her arms. Combined with Grace-Paseda’s elegance, it brings a sense of freedom and flow to the performance.

Sarai is not to be missed for fans of beautiful storytelling and enchanting music. Playing at the Arcola Theatre until November 7th it is worth seeing, if only for the breathtaking acting.