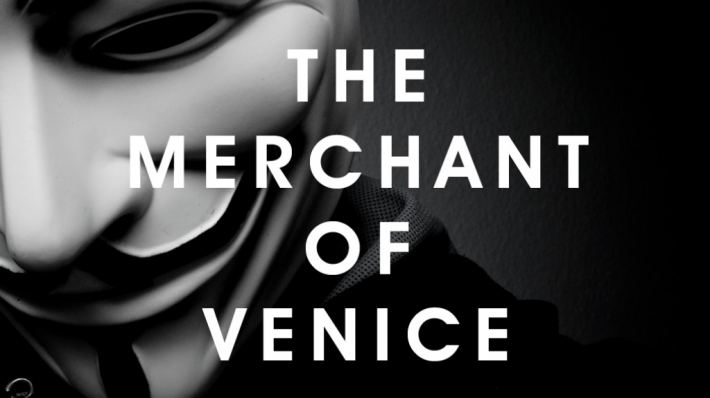 This is not the youthful adrenaline shot that it sets out to be. Stoppard’s abridgement of Shakespeare tragedy-laden comedy is marred by poor direction choices, although the performances, as in the NYT’s other shows, are of a remarkably high calibre given the REP cast is handes their hardest material yet with the Merchant of Venice. Either an inexorable product of Elizabethan anti-semitism or a subtle egalitarian plea, the play features Bassanio (Jason Imlach), desperate to subsidise the cost of being a suitor to the wealthy Portia (Alice Feetham) and who enlists his longtime friend Antonio (Andrew Hanratty) to help him out; Antonio makes a deal with Jewish merchant Shylock (Luke Pierre), although unforeseen circumstances force him to default with terrible effects.

Anna Niland’s direction changes the aesthetic of the play to clash with contemporary images: the Prince of Morocco is a gilded pimp with streetwear and a sexually aggressive attitude; the scene transitions (similar to Consensual), are punctuated by raving crowds and deafening house beats. It all produces a higher energy and makes everything funner, which enhances the lighter scenes of Portia’s Belmont. However, it drags most of the Venetian scenes into a torpor that disrupts any significant drama. The Stoppard abridgement also works against these scenes, as there is a persistent feeling that many of the key relationships are left undeveloped by the cut dialogue, such as with Bassanio and Antonio. The tonal changes of Portia’s scenes with those of the Shylock and the others are not weighed against each other with ample care and so the result is a confusion of the piece’s mood, especially in the first half. What actually works is when these two aspects blend into a more obvious hue with Shylock and Antonio’s trial: this scene is excellent since it keeps its decorative ambitions low and lets the actors decide the tone.

Luke Pierre is a thrilling Shylock, and delivers menace with enough of a sense of being misunderstood; the way he manipulates and then is manipulated by the power dynamic is communicated with great proficiency. Melissa Taylor and Alice Feetham dominate much of the play with their whimsical takes on Nerissa and Portia, providing the comedy but also able to yield to the equally comical suitors, played by Paris Iris Campbell and Lauren Lyle. Bassanio gets a nuanced treatment by Jason Imlach, who is presented as being torn by his explicit sexual affection for Antonio and his marital aims for Portia.

However, while the show’s portrayals are fine deeds of performance, the misguided direction brings the piece a few notches down with unfortunate insincerity.

The Merchant of Venice is on various matinee performances at the Ambassador’s Theatre until the 2nd December.