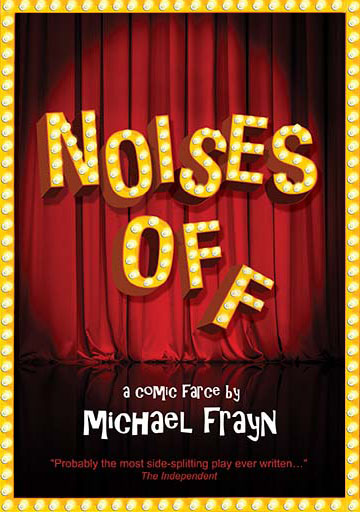 Noises Off at Bridewell Theatre

A night of laughter is always a night enjoyed. Everyone loves stories bursting with absurdities and humor, which is exactly what Michael Frayn’s comic farce, Noises Off, is able to deliver. Currently playing at the Bridewell Theatre, Matt Gould’s production, while thoroughly entertaining, is a little bit too long. It does have some great moments where the entire audience is laughing, but the script drags on during the third act. The length of the play makes the audience less taken by the end of it.

Be that as it may, the story is a very interesting one because it shows all the work that goes behind putting on a production. The play begins with the very entertaining Cholë Faine, coming onto the stage dressed as an elderly housemaid with a plate of sardines in her hands (the sardines become important later on). But what the spectators think is the beginning of the play they are going to see actually is not. It is a play within a play. Not long afterwards, the voice of the director is heard from afar, portrayed by Chris De Pury, bringing corrections to Dotty holding the plate of sardines. Only then does the audience understand what is going on. This is an unexpected and very entertaining aspect. It is not often that one goes to the theatre and is able to experience the backstage effect of it. Noises Off does this brilliantly.

The first act revolves around getting the dress rehearsal right, while in the second act, the stage completely transforms into the backstage of the set. Act II portrays a performance night where not everyone is getting along: there are many intertwined relationship, actor feuds, fighting…it’s all part of it behind the scenes. This is an excellent way to show the front and back of the production. In the third act, the audience is taken back to the living room set. The spectators see the disaster of the production that is being put on. This is meant to get the complete perspective, but the third act makes the play that little bit too long. Noises Off has some fantastic actors in what could be a very strong production, but it is simply too long for a simple comedy.

The set, as mentioned before, is very elaborate in that it changes completely from one act to the next. It starts out as a simple living room in a big house. It is very simple and well done and gets right to the point. It feels quite welcoming and homelike as people walk into the theatre. The second act shows the audience what a real backstage looks like, i.e. with the back writings on the doors to know what corresponds to what, stage manager positions and costume racks.

Noises Off is filled with hilarious dialogue, witty comebacks and disaster scenes that bring the audience to thoroughly enjoy their night at the theatre. Although it is a little bit too long, it is not a play to be missed. It does promise a hilariously absurd night out for those curious to see how a plate of sardines, broken set doors, and long nights of dress rehearsals can make the show difficult to go on.

Noises Off is playing at the Bridewell Theatre until October 24th.