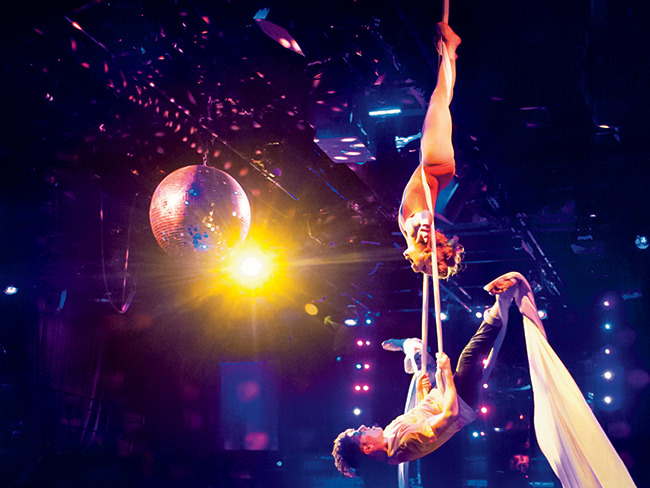 Recently, I had the opportunity to interview Marissa Rae Roberts and Elizabeth McGuire, the co-Artistic Directors of the performance company ToUch Performance Art, about their artistic collaboration, the appeal of immersive theatre to non-traditional audiences, and gender parity issues in the theatre production industry. ToUch is currently producing AcousticaElectronica at DROM in the East Village, which blends classic and electronic music, acrobatics, dance, and traditional theatrical elements in a hot nightclub setting.

ToUch is an interesting collaborative concept, producing innovative and immersive theatrical experiences – where did the idea for ToUch come from and what attracted you both to this creative endeavor?

Elizabeth: We were seeing all of these innovative, and inspiring new performances emerge, and it spring-boarded our mission to approach art making in a new way. Since then we’ve found our own identity as a company. It’s about our gut instincts. But no matter what story we want to tell, we always aim to break boundaries between the audience and the performers – I think we are attracted to that type of art making because it allows us to feel closer to our audience. It keeps things fresh, our work reacts to the audience reacting to it. It’s alive in a 3D space, and I hope we make our audiences feel welcome to really dive into the worlds we create.

Marissa: When I was getting my MFA in performance, I really had the urge to be apart of something more. I wanted to collaborate with different artists and create new things and be involved in a non-traditional way. I didn’t want to only perform. My undergrad experience was very diverse and filled with producing, directing, and designing. I missed that a lot while being at a conservatory. I met some inspiring artists who worked outside of theater and we really meshed well together. We started working on a show, that is now AcousticaElectronica, and decided that we had a good thing going and a company should form as well. I always knew I wanted to run my own performance company in some way – but I didn’t think it would happen in my early twenties!

ToUch’s production of AcousticaElectronica is currently being performed at DROM in the East Village – what do you want audiences to take away from the show? What distinguishes it from Queen of the Night, Cirque du Soleil, and other theatrical productions that infuse dance and theatrical elements to create a more interactive audience experience?

Elizabeth: After the show at DROM I speak to audience members and see what they took away from the experience. One of my favorite conversations I’ve had was with a guy who said that it was his second time seeing the show, and it unlocked even more about the experience than when he saw it first. This is what I love to hear! I want our audience to feel like they’ve participated. This isn’t a verbatim story, this isn’t a play. This is abstract storytelling and we aim to allow people to have their own perceptions, their own opinions. But what’s important is that they have an opinion, that they are moved in one way or another. That’s what I want: I want to keep the work fresh, for it to be different every single time, and for the rabbit hole to keep going deeper and deeper. As for what sets us apart, I think it’s our intuition – our gut. We have a story to tell, we like holding our own artistic experiments. Our story is different, and our creative juices are innovative to us alone. Like those productions, we certainly use storytelling blended with visual spectacle. But it’s our narrative heart that makes this drum beat to it’s own rhythm.

Marissa: What we want our audience to take away from the show is an experience that has ignited a feeling. We have created the show with an in depth concept about the relevance of classical arts and a narrative to go along with it but the story is told through dance, music, circus arts, and other mediums so it is not meant to be understood in a literal way. It’s hard to explain because you have to experience it. You understand when you are in the room with us where you can see it, hear it, feel it, touch it. It is a lasting feeling, like a modern art piece. The intention is not to be understood but felt.

Even though our show has grown and been polished since we started 4.5 years ago, we are still grassroots. I think what sets us apart from the other shows is that our art is raw and passionate and that comes across in each performance and has been one of the biggest bits of feedback I get from each show. As the artistic directors, we are still building sets, running rehearsals, always working together to make this dream happen for us. You can tell that our ToUch family is a strong one. We love what we do and we want the audience to have an unforgettable time. It is not glitzy and glamorous, it’s a real experience. An experience made by real people for real people to escape reality.

Immersive theatre experiences have grown considerably in number and popularity over the last five years or so (starting with the opening of Sleep No More), attracting non-traditional theatregoers. What is it about removing a show from the confines of a stage that people find so intriguing?

Elizabeth: Again, I think it’s about that connection. I truly believe that when an audience faces interactivity, the content of that moment means more. It’s not a 2D presentation where the audience is stuck in a seat, and the performers feel like there are in another plane of existence. It’s this moment, right now, and we are looking right into your eyes while we’re telling this story. I think that’s really, really powerful.

Marissa: I think there are several reasons for the take off in this type of theater experience. First, it is cool and trendy so a lot of people want to try it. Second, it engages audiences and can hold their attention span, similar to how our technology does. Third, it is not as intimidating as a typical theater experience! It is attractive to non-theater goers as a fun night out.

There have been numerous articles recently about the difficulties facing women in the entertainment industry, including in the theatre industry, which range from lower earning potential to fewer professional opportunities. Many of these pieces have highlighted the lack of substantive roles for female actors, the lack of female-written content that is being produced, and the lack of women in leadership roles (e.g., directors, producers). As women who have embraced projects both as actors/dancers and as artistic directors, have you struggled with any of these issues or seen colleagues struggle with them? If yes, what positive steps should be taken to address the inequalities that exist in the industry?

Elizabeth: I have definitely struggled with these issues and I’ve felt them since the first day we created this company. Walking into meetings as a twenty something female, trying to assert myself and represent my company with strength … I can’t deny that that has been challenging at times. People take women less seriously. I’ll never forget, one mentor even admitted that a producer we were trying to reach out to, “didn’t respond well to women,” and that our pitch to him would be better heard if a man reached out. But this frustrating truth has only made me stronger, and less willing to take any crap. I think the positive step that I can take as an individual is that I can just rise above. I refuse to let it stop me from achieving my goals for my company. It’s a delicate balance, because as a young company I want us to form meaningful relationships within the network, and do to so you have to have a level of strategic diplomacy. So I know that reacting aggressively in these situations could be detrimental to us, as much as I want to sometimes! But ultimately, how I try to address these inequalities is to do my best to expose them the moment they happen, call them out, and, again, not let them get in the way of the goal. I do not accept internalized misogyny!

Marissa: I am fully aware of these difficulties. One of my goals with starting ToUch is to create my own work and opportunity. Therefore, I don’t think of this often as an obstacle but rather as an opportunity to change the scene. I have had the opportunity to have strong, amazing women as mentors. Both my grandmother and mother were entrepreneurs. The first time I ever grew as a young actor was from a female director in college who actually took the time to work with me rather than just give me notes. For the last 4 years I have had the opportunity to work at the American Repertory Theater, both as a performer and with ToUch being an Artist in Residence there. It’s been incredible to work with such creative and powerful women including Diane Paulus. She is fearless and strong and has created an environment filled with incredible women who want to make the best work they can. It’s so exciting!

What is next for ToUch?

Elizabeth: Amazing things! We are cooking up a new work, currently titled Generation Y, which is in a workshop phase at American Repertory Theater, and will premiere February 2016.

Marissa: It’s simple: we want to create more, perform more, and keep connecting with our audiences.