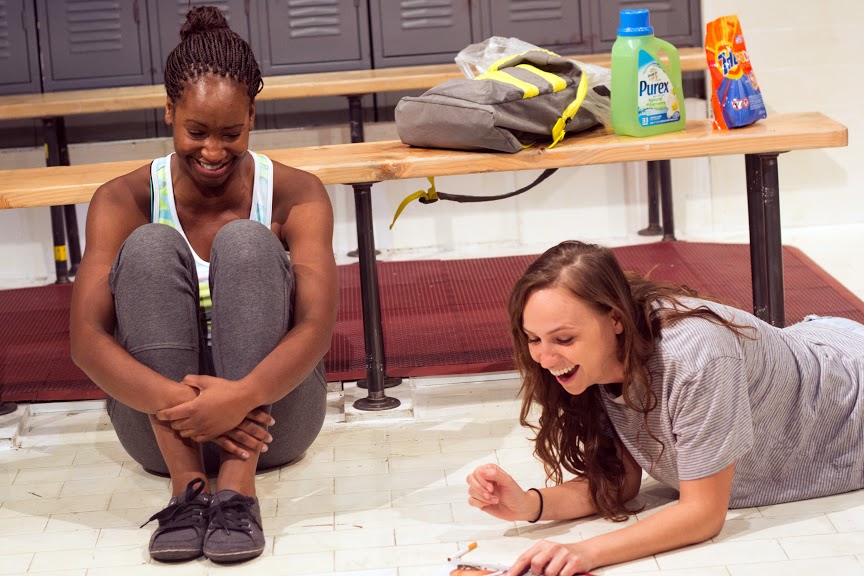 Company One Dives in with Dry Land

Interviewed by dramaturg Jessie Baxter, young playwright Ruby Rae Spiegel spoke about how writing a certain distance from the past helps her produce convincing work: “In high school I wrote a play about middle school, and in college I wrote a play about high school…I like to write when I have a bit of perspective, but maybe not too much perspective.” This proximity to experience contributes to the powerful punch packed by her new play Dry Land, staged by Company One at the BCA Plaza Theatre, directed by Steven Bogart. This teenage story of female friendship, female bodies, and loyalty in the face of difficult decisions is poignant and a far cry from the condescending portrayals of teenage lives often seen in the media and pop culture.

Most of the play takes place in a pool locker room, a safe haven between swim practice, school, and home life. FSU-scholarship-hopeful Ester (Eva Hughes) finds herself becoming closer to her wild-child teammate, Amy (Stephanie Recio). The bond that unites them is a sticky situation: Amy is pregnant and wants to have an abortion without anyone finding out. Rather than reach out to her BFF Reba (Alex Lonati), she reaches out to Ester. Amy rightly guesses that Ester can keep a secret, and rightly suspects that Ester is eager to be a loyal friend to her during this tough time.

These relationships, rather than any single political issue, are the bedrock from which the plot progresses. This play is not just about abortion: it is also about navigating fraught waters (no pun intended) in an attempt to become closer to someone else. It is about loyalty and a desire to not be alienated. And yes, it is also about the occasional casual cruelty inherent in all friendships, not just teenage female ones.

Spiegel adds a layer of nuance to the action of the play by having the characters avoid much discussion of the adults in their lives. Parents greatly influence the lives of their children, but by avoiding tired framing devices (e.g. difficult home lives or neglectful/abusing parents), Spiegel grants her characters an agency that makes them far more interesting and fully developed. There’s a reason our teenage years can feel so isolating and painful, even for those who look back on them fondly: so much of who we are is determined in those in-between years, in the time we are not seen as “real people.”

Hughes’s Ester is hardworking and desperate to prove herself to her new friend. Her fascination with Amy is evident, but the roots of it are wonderfully ambiguous, making her vulnerable to Amy when she feels like lashing out. Hughes is especially adept at portraying Ester’s uncertain attempts at conversational ease with her peers. Ester’s biggest challenge is seeing herself as worthy for herself, as well as for her athletic prowess.

Recio’s Amy is charismatic, magnetic even in her aggressions and insecurities, in her demands as well as her generosities. Recio’s performance is raw and powerful, and we can’t help but cheer for Amy, even as she puts herself and Ester in precarious situations.

This duo is balanced by key supporting roles. Lonati’s Reba is just the right mix of oblivious and cool, completely at ease in her smartphone/swim-practice/school milieus, ignorant of the trials her best friend is going through. Kadahj Bennett plays a college student named Victor who helps Ester gain some insight into Amy’s behavior as well as her own. Bennett’s presence is wonderful, a great mix of fidgety friendliness and awkwardness, kindness and gentlemanliness. The only other male presence (and the only adult one) is that of the pool’s janitor (Paul Trainor), whose brief scenes shock us back into the reality of a world outside of Ester and Amy’s war room. I am a fan of anyone who can impact a scene in less than three sentences. Trainor delivers more in his pitying looks and resigned movements than many actors can in pages of dialogue.

Spoiler alert: In what I would argue is the most powerful moment of this play, we see the janitor come into the locker room in the aftermath of Amy’s DIY abortion. We know that he was charitable in absenting himself from the room earlier, allowing the two young women some privacy. But as we watch him mop up the blood on the floor, picking up stained newspapers and throwing out the trash, we realize who’s really being indicted here. We, the audience, sit and watch someone remove any trace of the difficult, dangerous procedure that has just happened. It is a brutal reminder: as long as the reality of DIY abortions remains a taboo subject, as long as any discussion of women’s bodies is reduced to a blame-game in which pundits shout and argue over what women should be allowed to do, we are complicit in the clean-up act. God forbid we be exposed to the grim reality of women taking power into their own hands, of women making desperate choices because they have nowhere else to turn.

C1’s staging completes the experience, effectively taking us back to high school. Andrew Duncan Will’s brilliant sound design immerses us into the comfortingly garbled sound of a busy pool heard from underwater, of the buzzing mix of laughter and piercing voices heard in the hallways of any American high school, cut short by the all-too-familiar shrill whistle of the period-marking bell, of the hollow echoes and bangs of lockers right before practice starts. Daisy Long’s lighting complements these auditory cues; I was a particular fan of how the delayed, buzzing flash of fluorescent light brings us back from each scene break into the scuffed floors and chlorine-scented oasis of the locker room (Courtney Nelson’s scenic design).

C1 has opened their 17th season with a bang. Check out Dry Land if you want to see a talented, upcoming playwright make a huge splash in the Boston theater scene.

Company One’s production of Dry Land is playing now through October 30th, 2015 at the Boston Center for the Arts Plaza Theatre.