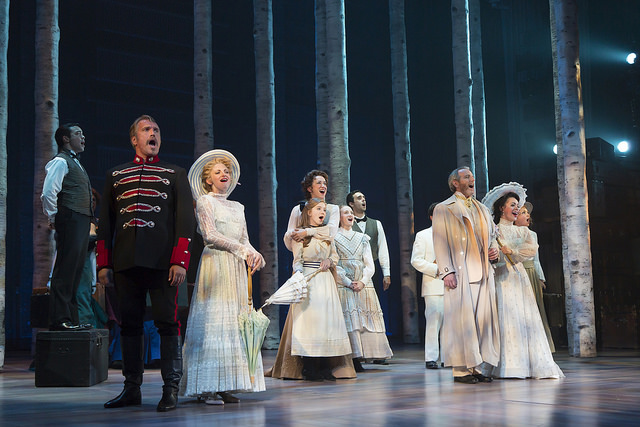 A Gauzy and Glamorous Night at the Huntington

The Huntington opened its 34th season in September with Stephen Sondheim’s romantic, waltz-infused musical A Little Night Music. Full of sumptuous tunes, gorgeous costumes (design by Robert Morgan), and great performances, the production does justice to Sondheim’s dreamy, romantic tale of, as director Peter DuBois puts it, “sex and death.”

Led by the warm and mellifluous Haydn Gwynne as the aging actress Desiree Armfeldt, the cast infuses the production with humor, energy, and hypnotic harmony. The story revolves around mismatched couples looking for happiness in fin-de-siecle Sweden.

Anne finds herself in much need of advising: upon a trip to the theater, she suspects Fredrick has had some previous romantic connection to the famed Desiree Armfeldt. She is correct: Fredrick and Desiree were once lovers. They reconnect after the show, only to be interrupted by her jealous current fling, the dragoon Count Carl-Magnus Malcolm (Mike McGowan). Though he is too tin-brained to understand what is going on, his long-suffering wife Countess Charlotte Malcolm (Lauren Molina) unites with Anne to attempt to separate Fredrick and Desiree. All the plots come to a head at Madame Armfeldt’s (Bobbie Steinbach) home in the country, where Desiree’s young daughter Fredrika (Lauren Weintraub) hopes she will be able to one day join her mother (and a possible father) in a home to call their own.

The Huntington set shifts from a vast empty warehouse space studded with enormous traveling trunks to a birch tree spotted estate in the country (design by Derek McLane). In a land where the sun never seems to set, everyone eventually makes their way to the proper couple they belong to. The denouement is all-too-enjoyable to witness.

There were some particularly stand out performances. Kirner was bubbly and winning as Anne. She was adept at showing why, no matter how mismatched they are, Frederik would find this young girl so appealing. She was more adoring than annoying, and we are happy when she runs off with a new (appropriately aged) lover.

Torres made Henrik a ticking time bomb of repressed desire. Whether he was frantically bowing away at a cello’s strings or stumbling around in the dark trying to find a tree to hang a noose from to end it all, he earned both our amusement and our pity.

But the two show-stealers are the Count and Countess Malcolm. McGowan’s physical and verbal abruptness made the dragoon’s violence more buffoonish than threatening, more humorous than startling. Molina’s countess was hilarious. Sarcasm palpable, rage smoothed into melody by Sondheim’s score, glee effectively conveyed in her giggles and in her ill-fated devotion for her militant husband, she particularly shone in this star-studded cast.

While the predictable popularity of this musical didn’t convince me the Huntington’s new season would have much surprises in store, I’m hoping this nostalgia bit was just an appetizer to get the 2015-2016 season started.