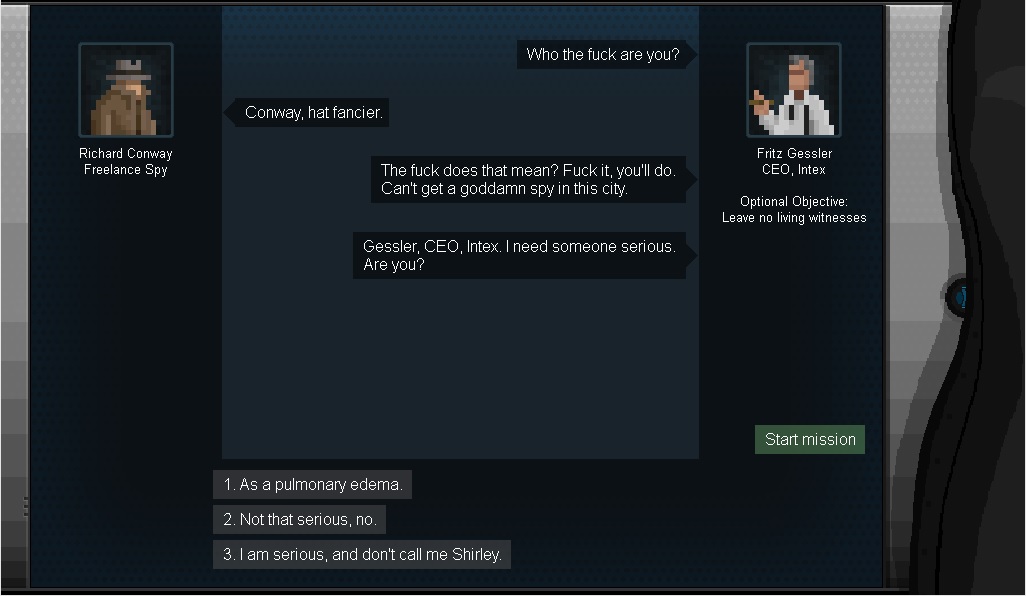 Sweet Bytes is a series of articles that highlights fun, unique video games that you can play through in an afternoon.

Gunpoint is what you get when you throw smart puzzles, fast-paced action, and espionage in a blender—all with a tech-savvy noir twist.

It starts by throwing you out of a building and only gets better from there. By the end of the first level you’ve been caught on tape at the scene of a murder you didn’t commit. It sure is lucky that you’re a professional private investigator with excellent hacking skills… and that the woman who owns the crime scene is strangely invested in helping you get rid of the evidence.

One of Gunpoint’s greatest strengths is that it plays exactly as quickly as you want it to. If speed and violence are your jam, you can easily knock out the whole game in a few hours. But Gunpoint also leaves plenty of room for you to take your time exploring the best solution to every puzzle. You could beat the game without killing a single enemy—or without leaving one alive.

You want to hack into high security buildings, outsmart an entire police department, and sneak through the shadows like a master ninja? Go for it.

You want to kick down doors, shoot your enemies in the face, and jump six stories out of a glass window just to hear the glass shatter? Knock yourself out.

Gunpoint’s format is simple: the action takes center stage, while occasional dialogue screens move the plot forward with entertaining gumshoe banter. Between missions you buy new gadgets and upgrade your jumping, smashing, and zapping skills—but both the upgrades and the text leave the focus firmly on the action.

And what beautiful action it is. If you love puzzles, you’ll be right at home here, but even if you don’t? Gunpoint gives you a lot of freedom to be creative, and the results can be hilarious. Sure, you could use your hacking skills responsibly and just do your job without being seen. You could also hack the guards’ guns so that they accidentally shoot each other when they’re trying to shoot you. The possibilities are endless. It’s like a cyberpunk noir episode of Tom and Jerry, complete with fedora and trenchcoat.

The plot is just what you would expect out of any story that stars a PI. The tutorial level—more of a crash course, if you will—ends with murder, but there’s a conspiracy to uncover that goes far beyond one dead body. Like the cerebral levels of gameplay, you can explore the plot as deeply you want. The more complicated layers of intrigue are built into optional objectives, usually by hacking laptops hidden throughout the levels you’re exploring. If you just came for the gun show, you can easily skip them.

But the plot adds some fun layers to your subterfuge. You are, at one point, asked to investigate yourself, and how honest you would like to be about that is entirely up to you. The story branches, offering you some choices about which suspects to pursue and what your priorities are as a detective. Are you more invested in learning the truth or seeing justice served? Who do you trust? It’s no Dragon Age, but there are several possible endings, which gives Gunpoint some added replay value.

The built-in level designer is another interesting bonus. I’ll be honest—I was psyched to try this out, but it didn’t fully live up to my expectations. It’s fun for a little while, and the interface is fairly intuitive—plus, you can share your creations online—but there wasn’t much opportunity to go beyond what the devs did with the existing game design.

The retro graphics, reminiscent of that early-console NES and SEGA era, come off as quite charming. They also evoke a sense of nostalgia that works very well with the noir undertones. The sound design turns that noir feeling up to eleven with a jazzy soundtrack that can only be described as sexy. The sound effects are also delightful, whether it’s the sense of satisfaction you get from crashing through a window or the cartoonish thwack when a door hits you in the face.

In summary: Fast-paced action? Check. Smart puzzles? Check. Engaging story? Check. Replayability, humor, corporate intrigue—check, check, check. An achievement for how many times you can punch someone in the face?

Well, I’m not going to spoil everything for you.

Gunpoint is on Steam for $10, where there is also a free demo available. An indie game released by Suspicious Developments back in 2013, the user reviews are “Overwhelmingly Positive.” I highly recommend you play it.