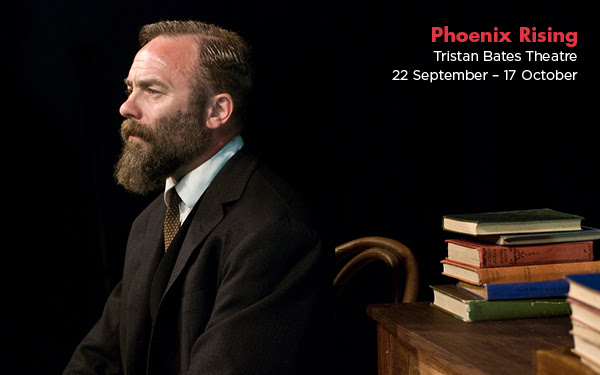 Quite unusually, I was handed an audiobook before sitting down to watch this show—I believe it was an audiobook of the show, or it may have been one of Sons and Lovers or The Rainbow which Phoenix Rising’s Paul Slack has found success in narrating. Regardless, it gives gives clues as to quality of the play. While its concept is well-meaning, there is a strong feeling that this show by Nottingham Playhouse and Eastwood Productions would have better effect as a text rather than on the stage.

Phoenix Rising comprises D.H. Lawrence writing a letter to a childhood friend after having a domestic dispute with his wife. We learn in this letter of Lawrence’s formative memories—from his childhood to the time of the letter. Unlike the indolent McQueen earlier this year, the play actually attempts to explain the author and artist’s influences or at the least present them: we see the affection for his mother, his coal-mining father and the young, inchoate sexuality that would inform so much of his work. This is the production strongest facet, although there are essential omissions that weaken its impact: despite its emphasis of memory, we do not learn much about Lawrence’s writing technique and where it comes from. We are made to accept that he writes uniquely and that is the end of it; there is little reference to other authors apart from, perhaps, those of The Bible. When Lawrence remarks how advanced his writing is we have no idea why or how it is this way. It is this lacuna in the play’s content that reveals a subtle flaw in Campbell Kay’s script: there is too much deferral to the notion of Lawrence as a a great Canonical author and not enough probing of his merits. There are challenges to his character—for instance, when he verbally devours his wife in the play’s second Act—but for the majority we are forced to accept his brilliance rather than understand why it is so.

The staging is on two layers of quality. On one hand, it is utterly exemplary: Kay (also the director) gets Slack to use every conceivable level and area of the stage in a way carries each scene forward; from a physical standpoint, its balletic direction is near perfect. The set and props are similarly effective as every object, whether it be a table or book, is used to represent something else which helps illustrates to multifariousness of Lawrence’s creative mind. There is a downside though: while it is certainly dynamic most of the time, the blocking can seem as though it is trying to disguise the flaws in the script, often when the acting and descriptions are not strong enough to keep the audience’s interest.

Like the staging, Paul Slack’s portrayal of D.H. Lawrence’s generates a degree of ambivalence. He is marvelous in his energy: it is wrong to say he merely portrays Lawrence because Slack becomes a host of different people from his life and whether it is a child or Yeats, he gives a powerful rendition and this is crucial in propelling the pace forward. Despite Slack’s incandescent spirit, there is an imperfection and it is a critical one: while he can act happy or angry, he cannot convey sadness or weakness. especially through his eyes which are mostly unchanging throughout. He appears for much of the play as a psychopath running across the stage and while he knows how to show emotion, what he actually gives is a simulacrum of it. While this would have been easier to hide in a production with two or more cast members, it corrupts the candid nature of his some 80-minute monologue.

If you like Lawrence’s work, then you will most likely want to see this. Having only read Lady Chatterly’s Lover, I feel that most of the references, especially to his early works, have flown past me. However, it is these kinds of qualities in a biographical work that are the least interesting aspects: what I want to understand is who the subject is and why they are that way. There is a little of this in Phoenix Rising, but there is still room for another work on Lawrence to come along and expand this further.