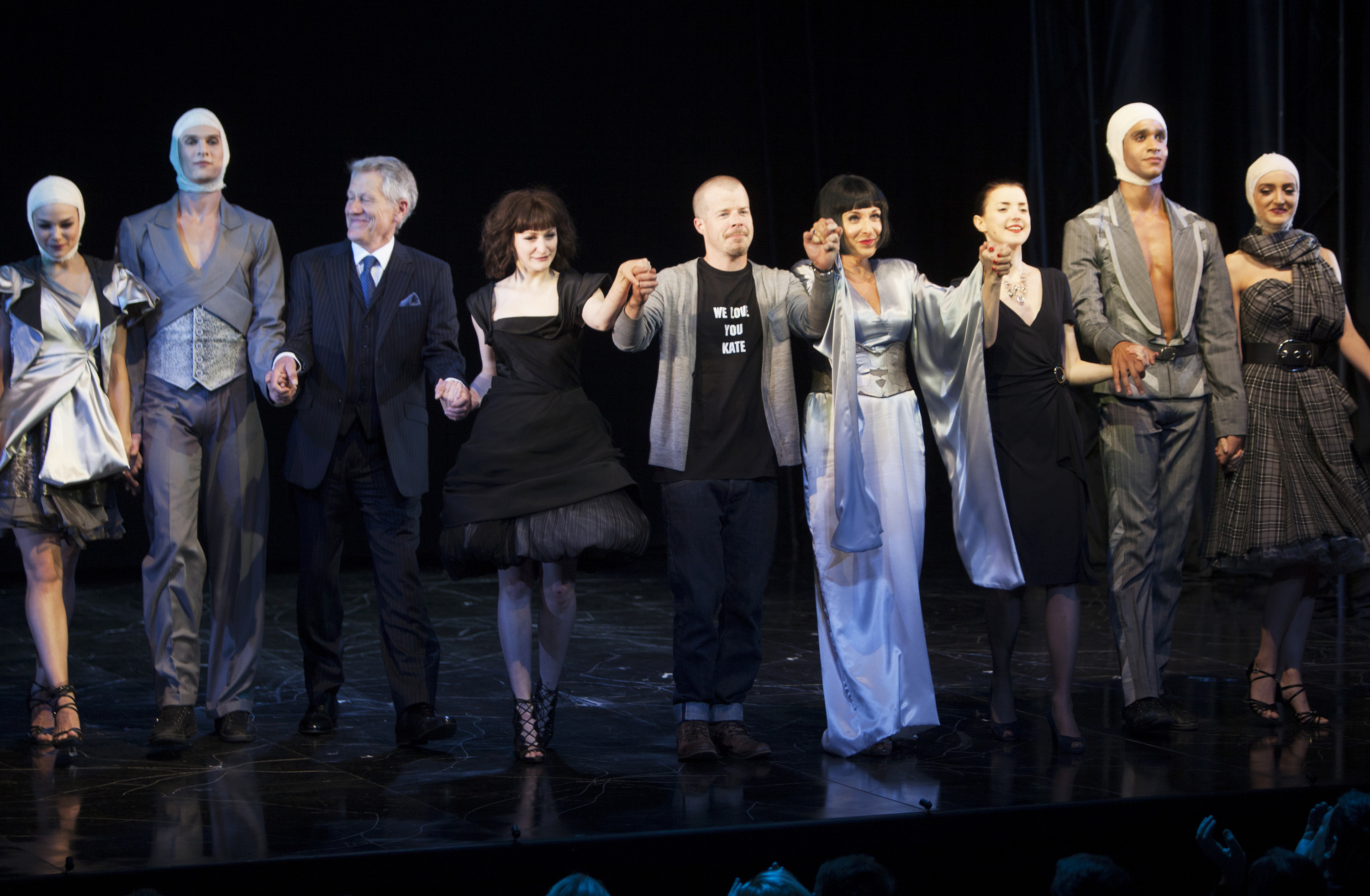 McQueen at The Theatre Royal, Haymarket

This show is the equivalent of guiltily checking your ex’s timeline on Facebook: it is not healthy, you learn nothing about how they really feel and it is ultimately a waste of time. McQueen is a self-congratulatory piece about a man who had probably had enough congratulations for a lifetime. While it maintains a great setting and a powerful lead actor, the show is uneven and should have ended at the close of its first Act.

Coming into this I wanted at least one out of two questions answered: what made Alexander McQueen a genius and why do people kill themselves? Obviously that was asking far too much, but this production barely even attempts to find any answers or even ask new questions. McQueen follows an evening with the late, world-renowned designer Lee ‘Alexander’ McQueen who struggles to invent a theme for his newest collection as an intruder, Dahlia, breaks into one of his warehouses sets them off on a journey around London.

As the audience, we learn barely anything of what made McQueen the great designer he was. Instead, James Phillips’ indolent script subjects us to cliches: Lee tells Dahlia to stand still and shut up while he designs a dress for her; do we know what is going through his brain at that point? We have little idea. The most we get is bunch of dancers dressed as mannequins moving about in the scene transitions, but their mundane choreography reveals nothing. We get nada about his artistry. The worst we get is a Sherlock-esque deduction that Lee makes about a stranger in a cringe-inducing party scene.

This is all a shame because Stephen Wight, the actor who plays Lee, is perfect in the role. While I knew before watching the play what McQueen looked like, I had no idea of his voice or his physicality. Wight conveys a true sense of character: it is not an impression—after watching videos of him my belief is confirmed. Wight makes McQueen into a real person: there is just the right cadence and reserved gesture that suggests he is embodying an authentic character. I am genuinely disappointed that Wight was not cast as Lee in a better play because he is definitive in his portrayal of him.

Wight’s skill contrasts to that of Carly Bawden, who plays his evening’s companion, Dahlia. Bawden is unconvincing, doubly so for her poor American accent. It all worsens by the fact that her lines are unbearably overwritten: no one from the audience wants hear her wax poetic on the nature of art and her miserable life. Fortunately, McQueen says fewer pretentious phrases than she does, but at least with him he has the support of his ingenious mind; Dahlia has nothing: she is unlikable and honestly, by the time she reveals she is also suicidal (in a horrifically contrived sequence in the second Act), the audience has little reason to care about her. This is not because the audience comprises heartless beasts but because she is not written as a real person: she is clearly a simulacrum of actual character. Possibly, she is not meant to exist within the frame of play and is rather a manifestation of Lee’s ego. Either way, no sane person would ever want to watch her.

The only effective conflict in the whole play is the growth and reveal of McQueen’s depression, which Wight communicates as well as possible given his tacky lines. Exceptionally, one thing that Phillips succeeds in with his writing is the intimacy that he achieves in the scene between Lee and his dead muse, Isabella Blow. While she is written as unreally as the rest of the cast, Act One’s end: Lee childishly resting his head on Blow’s maternal shoulder while speaking of the ‘illness’ rising inside of him—it is a great image. It is the only part of the play that one could consider a great moment. The director, John Caird, attempts a similarly arresting image in the play’s opening, with Lee wrapping a belt around his hands while he introspects, but this is far too obvious: while the belt is ironic image given its importance in fashion, the fact that Lee hanged himself with a belt in real life makes the image lose its polysemy. What is more, the play’s conclusions on the nature of depression are suicide are one-note: for people, depression just happens and there is little reason to it. While that may be a reality, it does not create good theatre.

Conversely, the one unequivocally strong part of the production is its setting. We see London and places fairly common to us—a warehouse, a rooftop, a club—but we know that we are seeing them through the mind of one of world’s fashion elite; it gives every location a significant feeling since we anticipate that these places form part of Lee’s inspiration. This obviously could be taken further: the most we actually get out of this feeling is when McQueen reveals his proclivity for feathers emerged from his birdwatching days on the roof of his old apartment building; regardless, the idea of McQueen’s fantastic artistry emanating from these mundane locales is the strongest thing that the play has going for it.

Then we have the set and everything around it, which is worth noting for its unabashed extravagance. It is a deluge of lights, projections, dances and sounds—thanks to David Howe, Timothy Bird, Christopher Marney and John Leonard respectively—but none of these elements should exist to the degree that they do in the piece. It is painfully ironic that for full of its pageantry, the only works by McQueen that it shows are a microscopic slide dress he made in 2001 and an unfinished gold feather coat he worked on before his death. The tech in this show references the catwalks that he made dresses for, but none of the artistry of the dresses themselves.

Tributes are not always good and nor are they always necessary. They can be done well, as in the Savage Beauty Exhibition which resided in the V&A this year. This show is not a good tribute; if it were half its length, I could overlook its weaknesses, but its two hours of insistent shallowness is a surfeit.