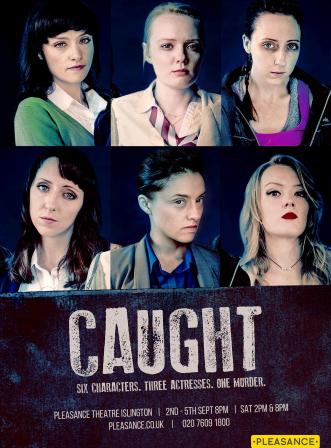 Caught at The Pleasance Theatre

I am thankful to see a crime drama in a London theatre. It is a scarce genre that deserves to be on the stage more. It is smart to set Caught mostly in an interrogation room: it is a perfect place for intimate, subtle theatre.

We see a detective pick apart the alibis of those who knew Emily Collins, the victim of a murder in Canterbury, a town which has not seen such an event for thirty years. The plot engages: it moves at a controlled pace, getting faster at welcome times with its events and exposition. Each character’s motives are revealed just enough for us to consider them real and not mere devices in the drama. It is pleasing to note that Caught does not care to be present itself as a typical whodunnit: we have no information to work out who is a killer and instead learn details as the detective learns them. This means that the audience is not distracted when the characters expose their feelings by their own thoughts of who actually did it; the identity of the killer is pleasingly immaterial in this regard. The only draw from the plot is that while the pacing is done well, the ending begins too early and its denouement feels misplaced. We are lead to question each character’s innocence in quick succession but this numbs and makes the unveiling of the true murderer at the final minutes an insubstantial event.

Since a detective story relies on its detective, it is fortunate that Detective Acton, the piece’s main character, is compelling enough while not also eclipsing the personalities of the suspects. The essential asset of hers is that she is not too likeable: she does her job without revelling in her own ingenuity. She is not a polymathic Mary Sue figure either: she is, for the majority of the play, normal, and this a boon to the constitution of the character. What slightly lets her down at times is her expository speeches towards to the audience: despite the play’s insistence on distancing itself from the TV world, many of these monologues are of the same ilk as the identikit ones of TV shows—those of jargon but no substance. What we do learn about Acton in these lines is far too obvious in its message, particularly in her differentiating between London and Canterbury. While Serena Chloe Gardner has a charming neutrality in the role, she cannot improve these lines. However, her performance is a considered one: Gardner carefully avoids appearing smug, retaining the audience’s empathy. Her performance is not perfect though: she is unable to reach the extremes of emotion of physicality that are required of her in a handful of the interrogation scenes.

The notable detail of Caught’s script is that it calls for three actresses to play two distinct roles each. Gardner therefore has to handle the other role of Emily’s aunt which she diligently underplays, an effective choice given the character’s position in the plot. Ella Duncan, who plays Emily’s best friend and her sister has a great vocal control and reaches the intensity that her characters need, though her eyes do not always appropriately correspond to her speech. Leah Lawry-Johns handles the play’s hardest role with enough helplessness that she avoids a huge potential pitfall: she plays Sinead—Leah in our interview referred to her, albeit wryly, as the ‘town chav’—whose character, if played poorly, could have created a horrifically inauthentic caricature, but Lawry-Johns, as the writer of the role and the performer, succeeds in generating pathos.

The set is refreshingly minimalist: two chairs and a table become an interrogation room; a block with a cover is a couch; a partition centre stage right creates a sense of depth. Director Eduard Lewis uses each space of the small stage in a striking way: the interrogations that stay stage left contrast to the aunt’s softer scenes downstage right which contrast to Acton’s monologues downstage centre. Each part of the stage feels like its own distinct space and this feeling greatly complements the writing.

The most important thing about Caught is that it tries difficult yet innovative things; the attempted contrast between the dual characters of each actor is the most salient of them. While there is not always the clearest contrast—Duncan’s roles are essentially differentiated for their loudness—it creates new dynamics and makes fascinating metatheatre, like, instance (if I am to spoil some of the plot slightly—spoiler ahead), when we find out that Leah’s characters are actually lovers (spoiler over). Another thing the play does singularly is that it proves the drama of interrogation to be as good for theatre as for television. Interrogation is as much a game of physicality as of words and that is precisely why the play’s scenes have the ability to convey that extra modicum of information. Now, of course, there is room in Caught for even more subtlety and physical conveyances of information—a clear example of such a ‘power play’ being Acton’s decision to give a suspect tea instead of coffee—but the choice of taking the act of interrogation and putting into a theatre setting is a very astute one indeed.

Caught ends on the 5th and will mostly likely sell out its small space, but if its production team decides to take it next year to a Fringe festival (a good idea) then be sure to see it.