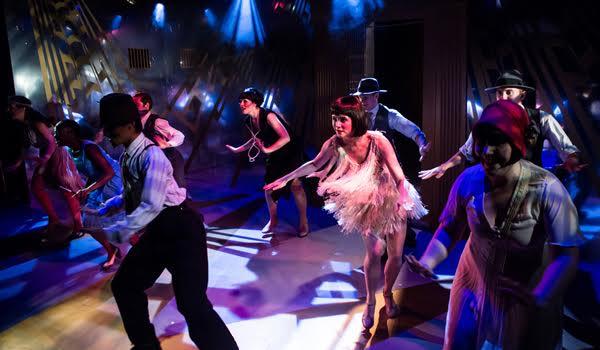 A stylish revival of the musical that hit the West End and Broadway with a bang over a decade ago, this stripped down version of Thoroughly Modern Millie is largely successful in its interpretation of the much grander original but lacks the pizazz needed to pull off such a unique and iconic show.

Those who are familiar with the Landor Theatre will know that this beautiful space at the top of a pub certainly has more limitations when putting on a large scale musical than the 1400-seat Palace Theatre where Millie played back in 2003. This is a show that is designed to have a large ensemble and so it is a very brave decision by producers Small Dark Woodland Creature Productions Ltd to bring the musical to London’s fringe with a cast of just 12. Credit is due to director Matthew Iliffe, and in particular choreographer Sam Spencer-Lane, who use the space magnificently and utilise their small cast cleverly to make this big show work in such an intimate environment. While it is true that some of the showstopper numbers would be more impressive had there been a chorus twice the size, Spencer-Lane does as good a job as anyone with the resources and space he is given, and his incredibly able dancers are constantly called upon to perform impressively slick and sassy choreography across a number of dance media. ‘The Nuttycracker Sweet’ is particularly impressive with almost the entire cast meandering around each other elegantly to the zany jazz piece.

Francesca Lara Gordon holds her own in what is an incredibly demanding lead role. She plays the part of Millie, the confident ‘modern woman’, well and commands the stage in her many solo numbers, singing with intensity and conviction. It would be nice to see more vulnerability in her performance however, as at times it is difficult to relate and empathise with her, particularly during more endearing and thoughtful moments. Ben Stacey puts in an energetic and charming stint as Jimmy Smith, particularly shining in ‘What Do I Need with Love’. He works well with Gordon as their characters develop through the musical and plays the happy-go-lucky protagonist with ease.

As a show, Thoroughly Modern Millie takes advantage of the creative liberties that musical theatre allows for—spontaneous bursts into song, farcical plot lines and even elevator tap dances all feature in the piece. It feels that in the Landor production however, these wackier moments aren’t taken advantage of enough and the safe direction results in many of the humorous elements of the show being restricted or even lost. This is noticeable with Samuel Harris as Trevor Graydon who, while at times delivers some wonderful one liners, doesn’t seem to know how far to take his character. The laundry room scenes are also disappointing as despite there being so much material for the comic reliefs to work with during these sections; they don’t seem to fully commit to their roles and play them too straight, missing many of the jokes. The reprise of ‘Not for the Life of Me’ and the second half song ‘Muqin’ have the potential to steal the show but instead end up reasonably forgettable.

Despite a valiant effort from Chipo Kureyo, it is difficult to understand the casting of such a young performer as the supposedly wise and even motherly Muzzy Van Hossmere. Kureyo performs well, and has an undeniably beautiful soulful voice, but it feels very strange to watch the scenes where she is giving life advice to characters that seem to be the same age as her.

Along with the crisp and classy choreography in the musical numbers, the singing is also impeccable. Harmonies are note-perfect and the hard work musical director Chris Guard has put in with his performers really comes through in the singing. The band also does a fantastic job of producing a full and exciting sound despite only being a quintet.

Millie at the Landor is an ambitious production and despite its pitfalls is a very polished piece containing some lovely performances. A bit more confidence to push the comedy forward is needed but there are enough sophisticated and well produced musical numbers to make the show an enjoyable watch.