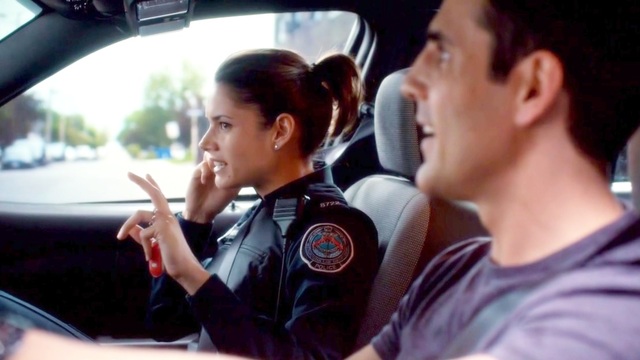 Canada’s best mainstream TV drama is yet to be renewed for a 7th season as it concludes its 6th (11 episodes that were originally ordered as part of a 22-episode fifth season but were later separated to air a year). The writers were clearly prepared for the possibility that this is the end- every single storyline is wrapped up in a neat package and everyone gets their happy ending- but there’s always more story to tell and I have a hard time believing that Global pulling the show would do anybody any good. Canada needs a show like Rookie Blue. Scratch that, we need Rookie Blue itself. It’s a success story; a real, long-term, high-quality, internationally competitive success story the likes of which doesn’t exist anywhere else in Canadian TV history (Slings & Arrows has its global cult following, Degrassi is a guilty pleasure across the continent and Orphan Black has brought a touch of prestige our way courtesy of one mindblowing actress, but Rookie Blue is alone in its commercial Grey’s Anatomy-like success). End of Story; we need Rookie Blue. Global, Do Not Cancel Rookie Blue!

Okay, on to some spoiler-filled season wrapping:

The division of the would-be extra long fifth season into two parts meant that we spent the majority of season six looking back on the events of season five, which I honestly just didn’t remember very well. This worked both for and against the show. On one hand, it was mildly annoying always hearing Dov mention key players in the station bombing who I didn’t remember anything about. On the other hand, it meant that a few plots that might have otherwise felt rushed instead had more time to grow, even if they weren’t necessarily receiving more screen time.

Gail’s attempted adoption of a little girl named Sophie, for instance, was established and dismissed over a relatively short run of episodes but the year’s break in the middle of it gave the story weight and at least a small touch of realism. More important in the grand scheme of the season, Traci’s relationship with Steve Peck got a chance to really sink in as part of the fabric of the series by stretching over multiple seasons. By the time Steve’s big endgame was finally revealed, I’d grown to trust and like him in a way I never would have if the relationship hadn’t played out so slowly. Adam MacDonald is, for reasons unknown, often cast as bad guys (moment of silence for Josh MacIntosh, he was so misunderstood) so, while I was disappointed to see Steve fall from grace at all, I was glad he was given enough time to trick us into believing it might end differently this time. The midseason break also meant that we could happily root for hapless underdog Duncan in season six, having conveniently forgotten how much of a whiny, useless, evil little turd he was in season five.

Let’s break the rest down, on a personal level:
– Sam and Andy get engaged, then married (very quickly with little fuss, which works for them)
– Marlo gives birth to Sam’s baby (a good dose of drama dealt with with surprising maturity)
– Dov and Chloe (Priscilla Faia quickly stepping up as the series comedy MVP) get back together after an excellently painful bout of miserable singledom.
– Chloe and Nick become really good (hilarious) friends (let’s hear it for a great platonic male-female TV friendship!)
– Nick falls for a(nother) girl who doesn’t deserve him (Juliette is nondescript and annoying; if the show continues, they have to find a way to bring Nick back without her because I can’t lose one of my favourite characters to Vancouver or have to put up with more of this dull character back in Toronto).
– Gail doesn’t do much beyond the Sophie and Steve stories.
– Chris doesn’t do much at all (I love Nick but when he arrived the writers seemed to forget what Chris’ purpose was).
– Traci and Oliver go through some of the strongest personal arcs of the season but we’ll talk about them in a moment because they were particularly well integrated into the larger arc of the season.

The professional:
– Dov is getting more into investigation and enjoying working with Marlo to unravel the bomb plot.
– A crazy stalker/rapist targets Traci. The storyline is introduced in episode one but simmers threateningly on the backburner until episode 5 when it comes roaring back to life to reward careful viewers who never forgot about it.
– A few strong standalone episodes of plain, exciting police work dot the season, including a softball game drive-by and a tense prison riot.

And the main event:
An internal affairs undercover agent comes to 51 division to investigate corruption after the bombing. She (Juliette) is wildly annoying (should I date Nick? I don’t know, I really shouldn’t; it would violate my moral code because I’m undercover investigating his friends. But he’s so cute! I guess I’ll date Nick!) and also fairly bad at her job because she falls for a pretty thin frame job. But the emotional ramifications of her reporting her false findings are totally worth putting up with her. Her boss, it turns out, is Noelle Williams, the feisty officer we lost a few seasons ago when every non-Oliver character over 40 was being phased out. She’s back and now having to hear Juliette report that the dirty cop at 51 who planted the bomb had to be Oliver Shaw. Dun dun dun. Well, we all clearly know it wasn’t Oliver so now it’s a matter of proving he was framed. It turns out the commissioner was corrupt and was blackmailing a designated 51 conflicted good guy into being a bad guy. Unfortunately for everyone who was rooting for him (okay, mostly me), Steve turns out to be that guy. Oliver’s anguish while under suspicion from the force he’s given his whole life to was incredibly compelling but not quite as compelling as Gail and Traci dealing with the fallout of Steve’s arrest. Traci, the infuriated ex with no interest in Steve’s further existence. Gail, the mournful sister who refuses to turn her back on him (but also doesn’t want her name dragged down with his). If only Juliette had been tolerable, this might have been the single best season arc Rookie Blue has ever done in terms of solid action and grounded, complex emotional consequence. Even with Juliette, it was still pretty darn great.

So we’re left with a wedding. Everyone is happy, or at least content, and on the brink of something new. The original rookies have rookies of their own (shades of Greys season four). Oliver takes back the dreaded white shirt (meaning an office job over his preferred place on the streets) in order to ensure that his team can stay together when the corruption in the department had threatened to get them all transferred. Sam and Andy are married and seem to have found their stride with Marlo and the baby. Dov and Chloe are together (Dov is also now a detective in training). Gail’s been flirting with the bitchy new detective lady (aka Steve’s replacement) and Traci’s been promoted to, I don’t know, head detective or something? Nick, unfortunately, appears to actually be in Vancouver to stay (nooooooooo! What will I do without Peter Mooney’s face?!).

Showrunner Tassie Cameron has announced that she’s leaving the show and word is now that the potential for season seven hangs in the success of the final few episodes still to air on ABC (because, remember, this is a rare crossover success for Canada). So, Americans, I’m asking you for a favour- something I never do. Please watch Rookie Blue this summer! Watch those excellent final few episodes play out because your friends to the north need this show, and its fate, as everything always seems to, rests improbably in your hands.

Finale Grade: B+
Season Grade: A-