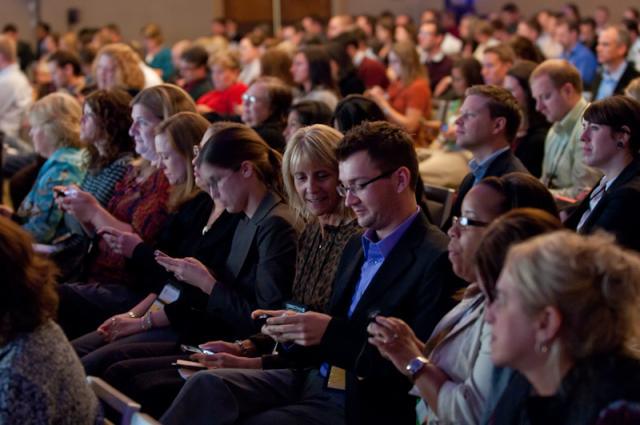 Don Aucoin of the Boston Globe wrote a piece thunderously applauding Patti LuPone’s recent stage antics: during a performance of Shows for Days, the actress reached into the audience and plucked away a texter’s cell phone. Aggravated with what she sees as “a few rude, self-absorbed, and inconsiderate audience members,” LuPone released a statement in which she announced she regretted nothing, and Aucoin heartily approved of her bold move.

I read the piece with interest and had many, many thoughts. I particularly appreciated two features of Aucoin’s argument. Though he calls those devious audience members who are happy to fill the dark theater with glaring white cell phone screens “dunderheads,” I commend him for not conflating the tech-obsessed with a younger generation of cell phone-armed theater-goers. Too many older writers would have gleefully blamed poor cell phone etiquette on stupid youngsters who don’t really appreciate The Theatre anyway.

This strain of self-absorbed human actually runs the gamut from young to aged. Surprisingly, in my own experience of theater attendance, I find older audience members to be the most disruptive. With all due respect to the elderly, it tends to be older audience members who feel comfortable expressing their views about the ongoing show in perfectly audible voices. I cringed in secondhand-shame when attending a matinee production of the Huntington’s The Second Girl last February: an audience member in the second or third row kept loudly asking her companion about the scene. It turns out that there were technical difficulties with the complimentary hearing-aid the theater had generously provided.

Getting back to the Globe piece, I also agree with Aucoin’s point that it should be the theaters’ responsibility to curb phone-use violators. He questions why theaters don’t follow up on their “Turn Off Your Cell Phone” warnings by “requiring ushers to keep an eye out for that telltale glow,” or by going so far as to warn patrons they may be asked to leave the theater if they don’t behave appropriately.

But I hesitate to pound the table along with Aucoin in celebrating an actor’s decision to interrupt a show, no matter how satisfying the schadenfraude may be in witnessing the villain be chastised. I, too, saw a show where an actor chose to call out an audience member: as I recount in the review, far from feeling satisfied with the outburst, I was completely pulled out of the play by the violent interruption. If LuPone worries, as Aucoin details, that audiences are being “robbed of something sacred” when a pernicious texter avidly types away nearby, what sacredness is left when an actor brings the show to a screeching halt by breaking character to angrily wag a finger?

And while I understand the piece mostly refers to a brand of audience idiot who refuses to disconnect from their Facebook and Instagram feeds even in the middle of an ongoing performance, let’s not forget that honest-to-God mistakes do happen. In an excruciating (and much scrutinized) incident at the New York Philharmonic, an audience member’s cell phone went off during the dramatic (and quiet) finale in Mahler’s Symphony No. 9, and the conductor, Alan Gilbert, stopped the performance in its track. A moronic music patron was to blame, right? Actually, the owner of the phone, a 20-year subscriber to the orchestra, had just received the new iPhone from his company, had no idea that turning it off did not prevent an alarm from going off even in silent mode, and did not know for several seconds he was the culprit. Did the unlucky bastard deserve so much snobbish vitriol, from a booing audience or a harumphing conductor, or even from an aggravated critic, for that matter? I would say not.

So while I agree that cell phones in the theater can be a real pain in the ass, I would advise everyone to do the following: monitor your own habits with regards to your phone use. Resist the urge to check your messages; resist, too, the urge to sanctimoniously sniff at the riffraff who don’t.