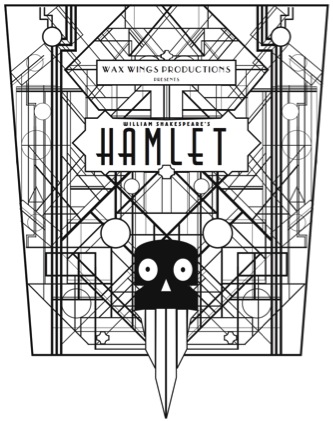 I have a complicated task in this review: to try to defend a production of Hamlet in which I did not admire the performance choices of the eponymous character. It is a theater cliché (more like a truth universally acknowledged) that no production of Hamlet can stand without its protagonist. And yet, there were elements of this Wax Wings performance, directed by Micah Greene, that I found admirable and quite enjoyable.

But let’s tackle first things first. I found Dolph Paulsen’s performance of the Prince of Denmark problematic for a number of reasons. Clearly comfortable with the early modern text, Paulsen deftly combined forceful physicality to the fluid dialogue, never losing his grip on the complexity of Hamlet’s character. But I would have appreciated his character choices more if I didn’t feel as though my ears were bleeding (and not due to ear poison) by the time the ghost scene rolled around (Act I, scene 4). Paulsen’s volume and force were jammed between an 8 and an 11 on a scale of 10; it was wearying at best, aggravating at worst.

But just when I had lost hope in expecting anything approaching subtlety from Hamlet, things got a bit more complicated. Many Shakespeare performances, professional and amateur alike, tend to favor the more popular/famous monologues of the great tragedies at expense of other great passages (care to guess which Hamlet monologue gets the most attention?). Personally, I like to gauge Hamlet performers based on the “How all occasions do inform against me” speech. By Act IV, banished to England, failing to have killed Claudius, at the peak of uncertainty, Hamlet witnesses a massive collection of men, two armies, prepare to battle over a worthless plot of land that is not large enough to bury all who will die in the struggle. The absurdity of the situation hits home, and Hamlet delivers a marvelous musing on his own situation. Prompted by every circumstance to murder his usurping, fratricidal uncle who has “stained” his mother and the state of Denmark, Hamlet remains impotent. And all the while, twenty thousand men prepare to “go to their graves like beds.”

I cringed as Paulsen prepared to deliver the speech. Imagine my shock when he delivers it gracefully; with nuance, with genuine questioning, with control. This Hamlet actually sounded like a man brought to a personal crossroads, a man ready to make a decision that will ultimately cost him his life. It was maddening; maddening to discover that while Paulsen is clearly a gifted actor, he chose to slaughter the text with flight-attendant physicality, staged pronouncements, shouty expression. Why couldn’t this performer take his own advice, and avoid out-Heroding Herod? How deeply ironic that one of the other precious few monologues delivered with some degree of temperance was the one extolling the virtue of passionate but controlled acting (to hold “the mirror up to nature”).

This temperamental portrayal of the prince came to a head in Act III, scene 2, right after the play-within-a-play. I witnessed a very troubling incident on the night I attended, during the final weekend of the run. In the middle of Hamlet’s argument with Rosencrantz and Guildenstern (played excellently by Robert Orzalli and Holly Schaff, respectively) over their “sponge-like” behavior, Paulsen abruptly turned to the audience and barked, “Excuse me, whoever is jabbering over there in the back corner, it’s very distracting,” before resuming his dialogue. It would be an understatement to say that this reprimand shifted the mood of the performance decisively. I could no longer concentrate on the scene, as I tried to process what had just happened (for the record, I didn’t hear anyone speaking from my seat in the first row). I thought it was a theatrically irresponsible move, both towards the rest of the audience and towards the other actors on stage (who, to their credit, didn’t skip a beat). All actors (myself included) have had to perform during cell-phone interruptions, occasional audience chatter, and even audible exclamations. Tempting as it may be, to chastise an audience member in such a way struck me as self-serving and unprofessional.

Thankfully, Hamlet is not all about Hamlet, and this production had many saving graces in its supporting roles and staging. Wax Wings made good use of the Davis Theatre Black Box, creating an intimate space for audience members to witness a decaying kingdom. However, there were some poor staging choices, such as the decision to have messengers and Laertes (Kyle Blanchette) deliver whole speeches to King Claudius (Thomas Collins) and Queen Gertrude (Holly Newman) with their backs entirely to the audience, especially since the thrust stage mostly served in a proscenium capacity. The production was judiciously cut, and some actors greatly compensated for others that seemed to not fully grasp what they were saying or motivated to do.

I was riveted watching the ghost (Kevin Kordis), eerie as he was in his slow, steady movements and shredded, shrouding black cloak (costuming by JoAnne Greene). I was particularly impressed by the stage business of Conor Burke, who played the gravedigger, Bernardo, and other roles. I found myself quite content to watch the gravedigger play around with an unearthed skull, propping his cap on it and attempting to dig out a gold crown from the jaw, rather than attend to the rest of the scene. In fact, I would applaud the many ensemble actors (Kordis, Orzalli, Schaff, and Burke) who colored in the spaces left blank by some of the main performances.

But I reserve my highest praise for Erin Eva Butcher, who played Ophelia. Her performance made up for any irritations I felt watching Hamlet, or the more un-engaging Claudius and Gertrude. Ophelia is one of the more difficult female roles to play in the Shakespeare canon, despite her prestigious place as top ingénue: we see very little of her motivations, we can only guess at the true nature of her and Hamlet’s relationship (since it mostly takes place before the play begins and offstage), and of course, what is easier to overdo than madness?

The nunnery scene provided an interesting contrast of how intensity can be portrayed divorced of fluctuations in volume. Rather than delivering a half-baked, breathy ingénue, Butcher’s Ophelia spoke intelligently and hesitantly to the raving Hamlet. In other scenes, she expressed true affection for her brother Laertes and a fascinating discomfort with her father Polonius (played by an excellent Daniel Boudreau, whom I would have loved to have seen play Claudius). But I was most impressed by her madness scene.

At first it didn’t seem as if it would stand out in any particular way. But when the distraught girl began handing out flowers, something unexpected happened. “There’s rosemary, that’s for remembrance”: Ophelia directed those lines to yours truly, sitting in the front row of the audience. I hesitated, and chose to not take the offering. Instead, I locked eyes with Butcher. This was definitely a more effective way to break down the fourth wall; in the middle of that staring contest, I received the chilliest look I have ever received from a character, either onstage or sitting in an audience. Abruptly, the mad Ophelia turned away and made a flower offering to someone sitting a few seats to my right; even after she turned away, the icy feeling remained. It was an exciting moment.

While this production could have used some major tweaking (a toned-down Hamlet, to start with), the clean staging (including obviously well-rehearsed stage combat) combined with the talents of the supporting characters, as well as those of Boudreau, Blanchette, and especially Butcher, certainly left me leaving the theatre “with my mind at work,” an objective described in the program notes. After my evening in Denmark, I’d certainly be interested in seeing Wax Wings tackle other Shakespeare plays in the future.